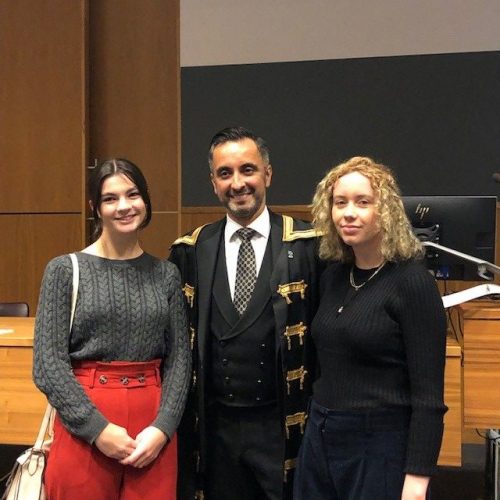 We are always excited about the annual Jimmy Reid memorial lecture. As we were not born during our Grandpa’s active life, it is always interesting to hear about him, particularly his famous rectorial address. Some years ago (2015), Nicola Sturgeon gave the lecture in Grandpa’s name in the Bute Hall of Glasgow University. We don’t remember much of the content, but we were so proud that this woman who we love as our role model was giving it. This year, it was Aamer Anwar, the Rector of Glasgow University, in the same hall as Grandpa’s was. We didn’t know what to expect. But he had us on the edge of our seats and on the edge of tears. His delivery was emotionally driven whilst still providing hard and difficult facts about our world today. He had our full attention for the entirety of his speech, which is an achievement in our book! It was so poignant for people our age and we were lucky enough to meet and talk afterwards to Aamer himself about how much we enjoyed his speech and how proud we were of him giving the lecture in honour of Granpa and what he stood for. We also talked about our sadness that so few young people were there and what we could do for the Reid Foundation to help engage our friends and peers.

One of the things we talked to Aamer about was his description at the beginning of his lecture about the mass demonstrations for the UCS work-in that took place in the 1970s. He said that sometimes it is easy to forget the scale of events which Jimmy led and took part in. Especially when there was no social media around at the time.

Aamer said that in June 1971 when the Tory Government announced that it intended to liquidate the shipyards on the Clyde, 800 shop stewards in a matter of days organized a mass rally with a union stoppage called for the 24 June: 100,000 people stopped work and 50,000 marched on Glasgow Green. In July, he said Jimmy’s suggestion of a ‘work-in’ captured the imagination of workers world-wide. On the 18 August 200,000 workers put down their tools in support of the UCS occupation and 80,000 marched on George Square. We didn’t know that and were amazed about how huge demonstrations were achieved prior to social media. How did they do that? Our Grandpa was indeed a motivational and inspirational man. We can only think there must have been a lot of use of ‘snail’ mail, leaflets being handed out and landline phonecalls made!

Large scale mobilisations are making a comeback today through the likes of youth for action against climate change as well as by all ages against Brexit and for Scottish independence. That is a good thing. It would be good if we also led the way to challenge poverty, inequality and racism. We were so impressed with the work Aamer does to fight against racism, his work for justice for young people who have died or committed suicide in our terrible prisons, and his fight for the Catalans against the Spanish government. Young people should have the historical knowledge about forms of protesting (particularly the UCS work in) to help inspire them to continue leading the way for change. Our Grandpa was only in his thirties when he led the UCS with the other men.

We would like to help make the Reid Foundation more relevant to the youth of today by discussing the issues happening today that are relevant to us. Aamer showed the way by using the appropriate language that we understood and his passion with which he spoke to us. Both of these things made what he said relatable to us and made the ideas easier to understand.

The form of communication that appeals to young people today, Facebook and Instagram would be ideal ways to spread Grandpa’s and Aamer’s messages of passion and anger, but also of hope. Young people could write articles themselves as we are doing now, daunting as that can feel. We’re not sure what a think tank actually does, but we’d like very much to be actively involved following Aamer’s speech. Hopefully that would encourage other young people to participate. Thank you Aamer Anwar and the Reid Foundation. We were so proud. Unity across the generations creates strength!

Catriona Reid and Elizabeth Reid Boulter are the granddaughters of Jimmy Reid, being in their late teens and early twenties and engaged in further and higher education