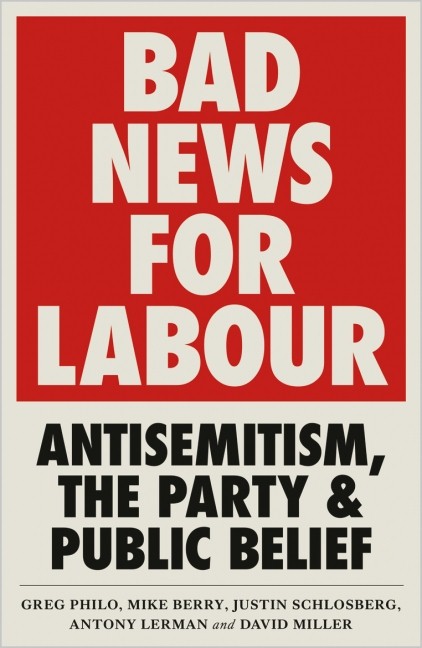 In conducting their research with such forensic rigour, Greg Philo, Mike Berry, Justin Schlosberg, Antony Lerman and David Miller have done Labour, the movement and the anti-fascist struggle a considerable service. Their research asks our media, a minority of the Parliamentary Labour Party (PLP) and a number of Jewish organisations claiming to speak for an undifferentiated community some very hard questions. Their evidence is marshalled throughout with a convincing academic sobriety. All those whose allegations made less likely the possibility of an authentically anti-racist government being elected to office should read this book. It is too late to recant, though clearly the political motives underpinning many of the interventions of the last few years made such epiphanies wholly implausible. Confronting anti-Semitism was not in fact their real concern. Discrediting Corbyn and Labour’s left turn, while shoring up the legitimacy of an apartheid Israeli state, is.

We are presented throughout with the kind of evidence that any journalist with a modicum of integrity should have found straightforward to gather. The opening focus group discussions demonstrate just how effective the campaign of misinformation has been. Despite referrals totalling a small fraction of 1% of Labour’s membership, participants express the belief that labour is ‘riddled’ with anti-Semitic behaviours. An initial pilot study finds that respondents believe between 25%-40% of Labour members have been the subject of complaints. A subsequent national poll reveals an average figure of 34%. The lie machine has done its job.

Philo addresses actual instances of anti-Semitism his researchers uncover in their investigations. He rightly makes clear a single incident is one too many. But it is clear these cases are not only numerically small, but often confirm the need for political education amongst members whose poor understanding of anti-Semitic tropes demand critical appraisal rather than public condemnation. Indeed, Philo draws our attention to cases where allegations have been dropped or found baseless, and members left with no support despite public vilification.

Philo is critical of Labour’s handling of initial attacks on Ken Livingstone and Naz Shah. A clear strategy designed to clarify and defuse was conspicuous by its absence. Labour was at once hesitant and overly-defensive. However, once Shakribarti’s report emerged and Labour moved to accept elements of the definition of the International Holocaust Remembrance Alliance (IHRA), before adopting it in full, onlookers of goodwill could have taken stock and accepted Labour was acting in good faith. But that was never the intention.

Despite other initiatives such as an on-line education campaign, the Board of Deputies and others refused to acknowledge the Party’s efforts. In fact, they were open to misrepresenting them. Labour Friends of Israel sustained the manufactured outrage, and a compliant media – from the tabloid right to the liberal press, the Guardian in particular – continued the allegations, confecting an environment in which, as the focus groups confirm, a public belief that ‘something must be going on’ was possible. MPs such as Margaret Hodge is exposed as ruthless in their desire to defame and smear Labour, irrespective of the consequences for an anti-fascist movement which more than ever requires maximum unity and clear thinking about the genuine threat of a far right only too happy to benefit from discord within the ranks of their political enemies.

Some startling moments emerge from Bad News for Labour:

• In advancing its national interests, the Israeli state is no different to any other state actor. However, a ‘racist state’ has more cause than most to aggressively lobby in defence of its fraying reputation. A web of influence and political leverage is exposed as working on behalf of Israeli state interests. This is not a ‘Jewish conspiracy,’ and Philo is quick to caution against such lapses. The intrigues of a state defending its political formation and unafraid to smear anyone or anything which threatens its hegemony are brilliantly revealed. Philo clarifies its character; a state of Israel is not intrinsically racist. As conceived under Likud and its far-right partners, however, the Israeli state has been captured by racists in both theory and practice. Throughout, the authors are keen to provide a nuanced discourse on the crimes of the Israeli state which does not stray into lazy anti-Semitism. For this service alone, the book is to be commended.

• The IHRA is exposed as being unfit for purpose, and Labour’s adoption of its full terms a consequence of political pressure which could and should have been managed better.

• Labour politicians and members are encouraged to be adroit in choosing when and where they intervene on the issue. The attack dogs are never satisfied, and there is a time, a place and an approach which limits the risk of walking into avoidable traps.

• Jennie Formby emerges as an unsung heroine of events. She inherits a dysfunctional disciplinary machine where staff are overwhelmed with both workload and public scrutiny, while others sought to actively sabotage Labour’s efforts. Formby is far more effective in addressing complaints and instituting new processes than her predecessor. Despite this, the prevailing hysteria frames her as complicit in racism and ineffective in office.

Glasgow University Media Group have a long and honourable record of interrogating moral panics and media narratives rooted in the legitimisation of class power. Their analysis of events which threatened to overwhelm Labour led by politicians with histories of standing on the frontlines of the anti-racist struggle provides the first exhaustive overview of a campaign aided and abetted by a foreign power determined to silence its critics at home and abroad. It provides activists with an understanding of how to engage with the Palestinian struggle while acknowledging the fears of a Jewish diaspora as the far right mobilise again. This is an invaluable guide to framing our arguments in fraught conditions and confronting a lie machine determined to poison the well of public discourse.

And, as John McDonnell rightly predicted, allegations of anti-Semitism did indeed ‘hurt’ Labour at the polls. Beyond the anecdotal evidence of activists, it is difficult to quantify by precisely how much. However, the choreographed intervention of the Chief Rabbi was bound to revive concerns. In directing Jewish voters to vote for anyone but Labour, we were confronted with voices clearly privileging their own ethnic group (and their very partial conception of its interests) over those targeted by Johnson and the right. Here was a PM-in-waiting whose racism, misogyny, homophobia and explicit anti-Semitism was a matter of sometimes recent public record. No matter. The issue was now a political football, to be used to discredit and defame, not to enlighten. This was recently confirmed again when Stephen Pollard, editor of the Jewish Chronicle, declined to withdraw support for an article published in his newspaper by arch mainstream racist, Melanie Phillips, which cast doubt on the ‘bogus’ concept of Islamophobia. Yes, Labour should have reached out with a more emotionally nuanced approach. But ultimately, as Philo et al. demonstrate, Labour’s detractors were, and remain, in no mood for reasoned discussion.