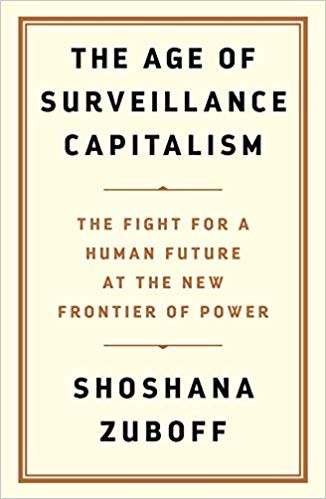 Whilst reading this international bestseller by Harvard academic, Shoshana Zuboff, I also happened to watch the Netflix documentary, The Great Hack, about the 2018 Cambridge Analytica scandal. Both the paperback and the film exposed a practice that claims human experience to be a free raw material for commerce. Google invented this ‘surveillance capitalism’ on a scale that is both astonishing and disturbing, conducting more than 1.2tn internet searches annually and manipulating freely all the information it finds. The market value of Google now exceeds $600bn with 2bn customers using its services every month. Advertising accounts for virtually every dollar Google and Facebook earns.

Both corporations, declares Zuboff, are ‘like an invasive species of predators who drive its business at speeds neither public institutions nor individuals could possibly follow’. These ‘predators’ know everything about our lives yet ‘their operations are designed to be unknowable to us’ she adds. ‘They revel in a world in which technology users are no longer customers but raw material in an entirely new industrial system‘.

In The Great Hack, New York University professor, David Carroll, tries to find out what information Facebook holds about him and his students. Although ultimately unsuccessful, his quest nevertheless shows how Facebook and Cambridge Analytica pilfered data from millions of people during the 2016 US election and Brexit referendum.

Networking was supposed to offer solutions to millions of problems in the form of social connection, access to information, time saving convenience and support. But, said Carroll, ‘so how did the dream of the connected world tear us apart?’

The misuse of information, data sets and patterns of behavior has been part of the answer and on an unprecedented scale. ‘Project Alamo’, the code name Cambridge Analytica gave to their goal of winning the 2016 election campaign for Donald Trump, targeted 5.9m people unbeknown to them via individual Facebook ads in bell-weather states among those they deemed ‘the persuadables’. Such was the slender margin of victory for Trump in the end that this pivotal act could well have made the difference between his winning the White House and losing.

This data was taken from millions of people without their knowledge. And like David Carroll’s all requests to know what was taken were refused. After a prolonged enquiry, The House of Commons Culture Select Committee Report on Cambridge Analytica in 2018 concluded that British election laws are no longer fit for purpose because social media privacy has been so compromised. Guardian investigative journalist, Carole Cadwalladr, went even further concluding that since Facebook refuses to let people have access to their own data ‘It is impossible to have free and fair elections’.

‘Those companies who once claimed to embody the promise of information capitalism as a liberating and democratic social force’ concluded Zuboff, now believe regulations to be burdensome and safeguards restrictive. Surveillance capitalism clearly intends, therefore, to keep democracy at bay.

Zuboff asks three questions about the functioning of the world’s digital media platforms: ‘Who knows what data they have?’, ‘Who decides what they keep?’ and ‘Who decides who decides?’ To the first: The machine, the elite executives at the top of Google, Facebook, Microsoft, Amazon and Apple. To the second: The ‘narrow business model’ determines the parameters. To the third: ‘Financial capital bound by the disciplines of shareholder value maximization.’
Social conditioning is now the ultimate prize for these technological ‘Masters of the Universe’. Their position papers were written by the infamous Harvard behaviourist and author of Walden Two, B.F. Skinner. ‘The real problem is not whether machines think but whether men do’ Skinner insisted in his 1960s heyday. The founders of Google, Facebook and Microsoft today see surveillance capitalism through his same logic of accumulation. They see machines becoming more and more invincible. Whereas the tyranny of Mussolini, Hitler and Stalin operated through the means of violence, according to Zuboff, 21st century ‘instrumentation’, surveillance capitalism and totalitarian power prioritises behavioral conditioning.

On reflection, it’s perhaps little surprise surveillance capitalism developed in the twenty first century amid such ruthless neo-liberalism. ‘It arrived on the scene with democracy already on the ropes’ concludes Zuboff. With its enormous wealth and political influence in mind she is reminded of Thomas Paine’s wisdom when he advocated increasing the capabilities of common people as against aristocratic privilege ‘because a body of men holding themselves accountable to nobody ought not to be trusted by anybody.’

Surveillance capitalism is, argues Zuboff, a tyranny that thinks itself invincible and she is reminded of an earlier era of danger. Writing in 1940 the US former Trotskyist and author of The Managerial Revolution, James Burnham, forecast the victory of German political leaders via ‘A new managerial class composed of executives, technicians, bureaucrats and soldiers who would concentrate all power and privilege in their own hands: an aristocracy of talent and privilege built on a semi-slave society’. George Orwell was scathing of Burnham’s ‘cowardly’ pronouncements and accused the right-winger of ‘bowing down before fascism’. Hannah Arendt, equally dismissive, declared his forecasts as a perversion of egalitarianism that sought to treat all others as insignificant. ‘Surveillance capitalism is a profoundly anti-democratic social force … an anti-egalitarian juggernaut’ concludes Zuboff who is determined to insist humankind does not succumb to the claimed inevitability of surveillance capitalism’s ‘illegitimate power.’

Colin Fox is National Co-spokesperson of the Scottish Socialist Party