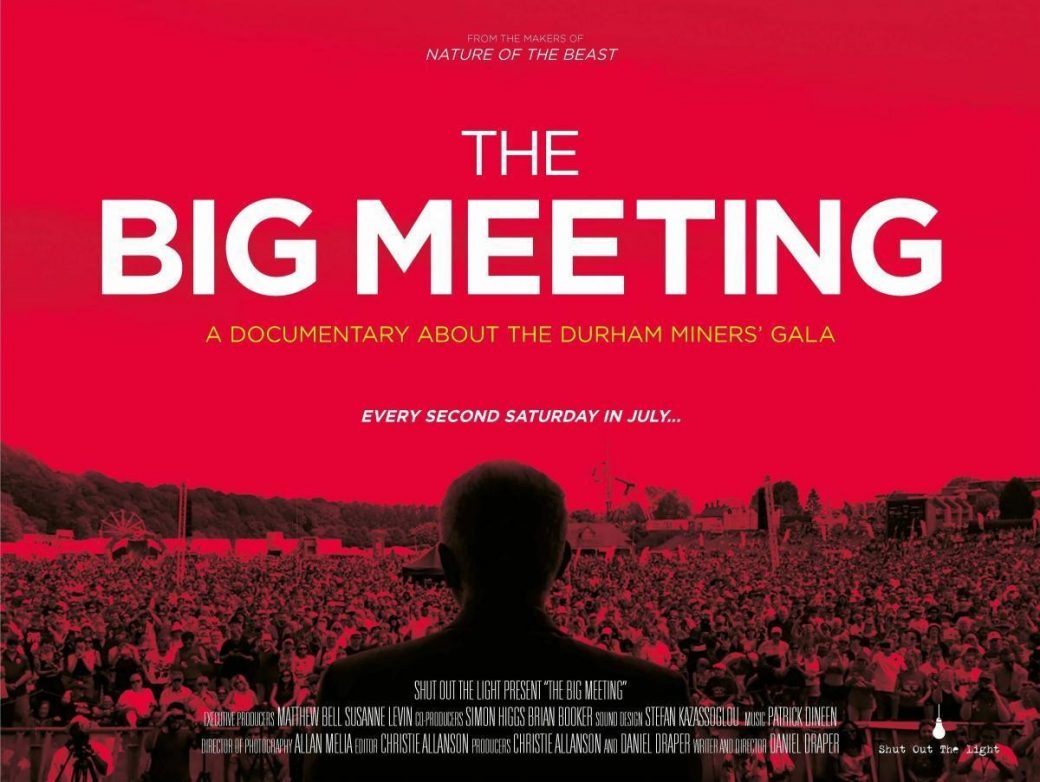 The Big Meeting is a documentary by film company, Shut Out The Light, which follows from the success of its Nature Of The Beast (2017) about now former Labour MP, Dennis Skinner. Its latest feature-length chronicle of the 134th Durham Miners’ Gala focuses as much upon the ingrained character of this annual event as upon the people involved in both organising and attending it.

A cornucopia of ground-level sound follows, to join us with people taking part in the current gathering of country-wide galas in Durham. Here, Draper grants first spoken voice to 19-year-old Charlotte Austin, who tells of her family’s mining legacy and of her involvement in Jeremy Corbyn’s Labour Party. Undoubtedly contributing to the film’s political tone as much as its vitality, a multitude of articulate voices, both ordinary and extraordinary, thus abounds: from people taking part in the 2018 gala event; to voice-overs from such as broadcaster and activist, Paul Mason; to a nerve-tingling recording of actor Richard Burton’s description of miners being ‘aristocrats of the working class … kings of the underworld’.

Bitterness about Margaret Thatcher’s Conservative governments’ heartless decimation of the mining industry in the 1980s is given due airtime without taking over the film’s more positive outlooks. Henceforth, banners, books, bands, businesses and artworks populate the film’s attention to the richness and diversity of Durham’s cultural and industrial talent. Mediating throughout its diverse strata of spoken words and political imagery: features include an overview of locally curated mining industry paintings by such as Tom McGuiness, Norman Cornish and Ted Holloway and an interview with filmmaker, John Irvin. Women’s roles in business, in the labour movement and in the gala’s traditions are given voice. Mention of such as climate change and feminism bestow almost effortless ripples, contrasting with gravitas marking pioneers like Hardie, Bevan and Benn.

Split-screen techniques occasionally energise prosaic footage of the gala, in a way which Draper felt echoed the filming of 1960s music festival, Woodstock. The result may be to add a touch more rock-and-roll flavour which parallels the appearance of political glitterati, Jeremy Corbyn and Dennis Skinner, enjoying brass band parades from a municipal balcony. Such glimpses behind the scenes are reasonably low-key, even in sight of VIP attendees such as film director, Ken Loach.

Unquestionably, The Big Meeting has an extraordinary amount to show-and-tell. From touching upon the origins of political reform through the Victorian capitalist Methodists, which allowed the formation of trade unions; to reminding us that this movement helped create a workforce which became globally regarded as the best and most powerful in the world. Through the lens of this modern, knowledgeable film, we thus observe the sun shining upon the ‘political theatre’ of the galas’ musical heritage. Brass band members and followers of all ages happily talk un-self-consciously, on and off camera; a live, Scottish bagpipe elegy ultimately resounds within Durham Cathedral, profoundly moving all who hear it.

Post-screening, Draper is clearly passionate about the significance of his own politics: ‘galvanising… [and] tapping into 60% of [people in Britain who represent the] working classes’ being his stated ideal. His inclusion of film participants’ vocalisations about working miners’ families having ‘hate-love’ relationships with the mining industry proffers shade over bright idealism. Vintage film footage of mining conditions involved reaffirms reasons for such dichotomous feelings and the polarisation of thoughts about the industry being a lifeline, while it also took lives.

The Big Meeting could never be viewed as a politically impartial film. Its sentiments clearly stand with Labour. Nevertheless, those who stand closely enough will value the film’s clued-up take on the Labour movement, within the focused context of Durham Miners’ Gala.

In creating a documentary which meaningfully augments imagery around and beyond the 2018 event itself, Draper clearly aims to enlighten his audiences about the wealth of political and social understanding which he and his crew broadcasts. The oxygen which his film deigns to breathe into their observations of the annual event habitat weaves and illuminates between and beyond its spontaneous viewpoints. The result is a small masterpiece – definitely worth seeing.