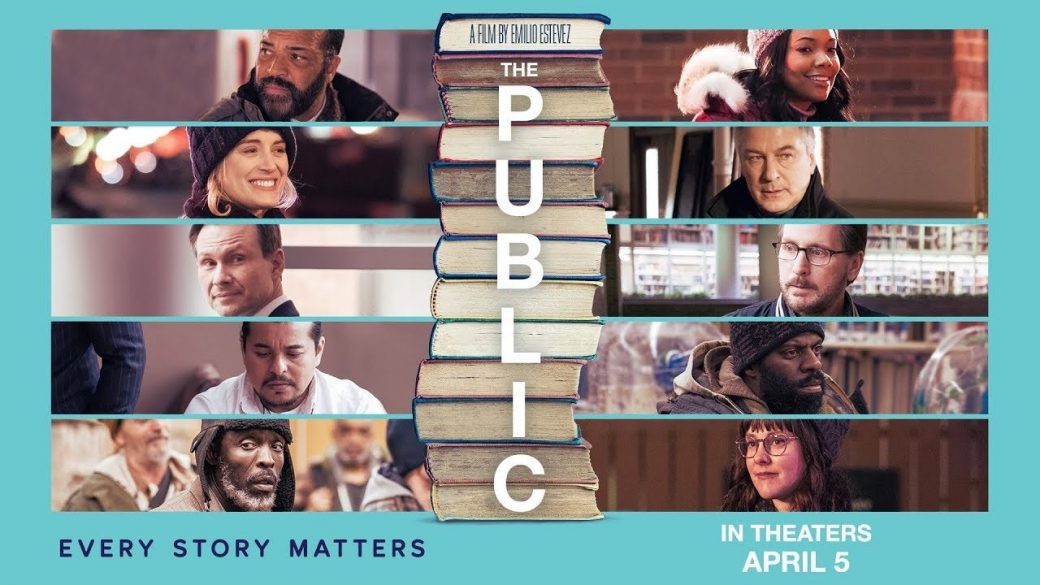 With an endearing central performance by Emilio Estevez, who also wrote and directed this independent drama film and with a Hollywood cast including Alec Baldwin, Jena Malone, Taylor Schilling, Jeffrey Wright and Christian Slater, The Public is bound to reach a broad audience demographic. The film tackles the subjects of homelessness and civil rights within society – corpus debates held in micro-cosmic focus.

A modern fable without didactic conclusions, The Public makes current and historical references to John Steinbeck and Wall Street. In an intelligent nod to Roman civilisation BC, private-seeming news about a recently deceased homeless man named Caesar is grandly discussed by his compatriots while they wash and brush up in the men’s room of Cincinnati Public Library. Ironic use of the Roman colossus’s name in this context is fascinating, because in his time, Julius Caesar proposed a law to redistribute public lands to the poor. This subtext suggests to us that the term ‘homeless’ neither equates to nor implies uncharitable or uninformed.

More glitzy than Ken Loach’s examination of Britain’s welfare state in both the seminal drama Kathy Come Home (1966) and three decades later, I, Daniel Blake (2016), Estevez’s The Public avoids the welfare debate completely. Instead, it conveys ideas about how society and individuals act and strive to resolve the toxic reality of homelessness. This film is deceptively simple in its portrayal of civilisation in conflict: policing, rules and regulations; family ties; morality; mental health; physical needs; institutional needs – somehow it manages to brightly reflect what could more or less be viewed as the depressing subject of a good man on the verge of being pushed back towards a homeless state under threat of losing his job. Homeless women are not in particular focus, for reasons not strained by explanation in the film.

A brief oration about climate change to library manager, Stuart Goodson (Estevez), delivered by his colleague Myra (Jena Malone) under the watch of a giant, stuffed polar bear in the background, and also the presence of national versus interactive broadcast media, afford a now-and-happening feel to The Public. Its central subject matter is news about the library’s invasion by homeless people, which initially carries as much skewed significance as the glamorous on-the-scene TV reporter (Gabrielle Union) affords it. She begins by hyping the idea that Goodson is unbalanced due to his unstable background and that he is holding homeless people hostage in the library where he works. As the film progresses, her critical discourse changes to admiration, as Goodson takes instinctive control of her channel’s audience by using his mobile phone to truthfully film events as they unfold inside the library. Adding an even sweeter note to the story, homeless street orator, Jackson (Michael Kenneth Williams), and library boss, Anderson (Jeffrey Wright), become surprising allies and brothers in arms to the beleaguered Goodson.

Estevez was inspired to make this film after he read a news article about a real-life event: ‘… I read a Los Angeles Times article that was written by a former librarian about how the libraries have become de facto homeless shelters and how librarians had become social workers … on a daily basis, they would have to call emergency services about people who collapsed or had an overdose or diabetic comas … it’s the last bastion of democracy in action. I was so moved by the article and what I saw, having spent so much time at the public library, I decided to start researching for a new movie’.

His central character, Goodson, is an unquestionably decent and lovable good guy who possesses flaws and heart-breaking reasons for his tolerant, good-humoured kinship with the homeless revolutionaries in his film. The fact that his building manager at home (Taylor Schilling) is evidently thrilled by him whatever his circumstances adds a deservingly romantic touch. By contrasting Goodson’s actions with those of Detective Bill Ramstead (Alec Baldwin), we bear witness to individual components involved within the thorny subject of homelessness. Undiluted cynicism, represented in the form of prosecution attorney, Josh Davis (Christian Slater), who on behalf of the Library Board attempts to form a legal case against Goodson, adds edgy intrigue to the film’s plot and subtext.

The Public is clear on the cynical use of poverty as an industry for lawyers like Davis to feed from. Through diverse perspectives of authority, individualism and solidarity, the film’s overarching, political stand becomes evident. This is a gem of a film and well worth seeing.