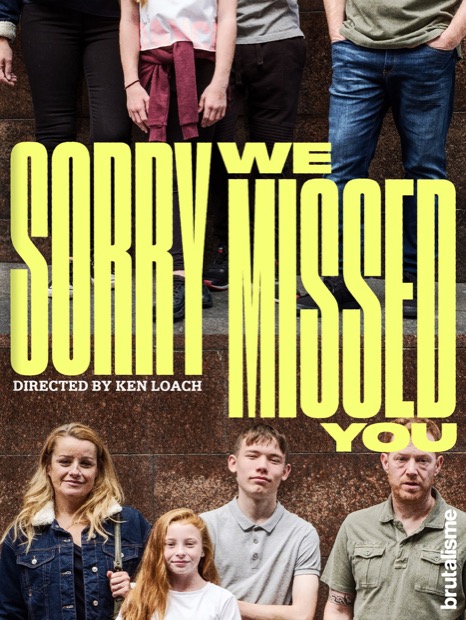 Possibly excepting The Angels’ Share, Ken Loach’s audiences have come to expect earthy, human storylines that end unhappily. Sorry We Missed You proves to be no exception, although signs of potential optimism within this latest feature film appeared to be overlooked by some audience members at its British premiere in Glasgow. Evidently therefore, the downward spiral of its characters’ lives reflects the ominous presence over the power of their hopes and dreams.

Ricky’s family is, however the focus of the film’s emotional journey. Powerless to change cynical management cultures which take hold of their time, their lives and ultimately their hopes and aims to work profitably and satisfyingly, their story sits at the film’s heart. The film is similar to I, Daniel Blake (which concerned inhumane policies and practices that place sanctioning, divisionism and pre-ordained number-crunching above empathy, respect and solidarity) in that it reveals the devastating impacts of these management practices. In Sorry We Missed You, the delusion of self-employment which renders workers as easy, disposable currency is exposed as being particularly gruesome and onerous.

The grossness of Ricky’s zero-hours contract and the arrogance of the unjust management scheme he complies with – because he has no choice – are patently obvious from the start to the end of the film. Alternately despotic and criminal means moreover transpire, effectively filching money from his hard-working pockets as events beyond his control progress from bad to worse. His steadfast self-perspective as a ‘grafter’ eventually dissipates, while his family show extraordinary resolve throughout his ordeal. Their unity is deeply moving yet empty, because it fundamentally conflicts with what Ricky feels forced to do to keep working and keep the family out of debt and free of the benefits system.

In typical Loach style, violent conflict delivers sudden, emotional shocks when escalating schisms of interaction erupt. We learn enough about Ricky to realise that, whilst genuinely striving to be reasonable, his main flaw is resorting to anger at home when over-pressured by impossible work obligations. As it becomes clearer to him that he is wrong to attribute his teenage son’s rebellious behaviour as the cause of family conflict, we nevertheless connect with his apologetic re-acceptance of his son, Seb (Rhys Stone), as an intelligent, communicative youngster whose true potential to become a responsible and mature adult has begun to emerge.

The most ironically satisfying moment in Sorry We Missed You arrives when Ricky and his wife, Abby (Debbie Honeywell) are seen to deal very differently with Maloney’s punitive callousness on the phone while the couple wait in a hospital queue. Her enraged lecture cleverly divides reactions of in-film onlookers, who are appalled at her outburst, and film audiences themselves, who applaud Abby’s uncharacteristically blasphemous response: brilliant stuff.

Arcs of political and social reference include the collapse of Northern Rock, which is revealed to have coincided with the Turner family’s failed bid for home ownership; Abby’s elderly care client’s 1990’s photographs of her coal miner husband, a ‘union man’ and his friends in the ‘colliery club’; regretful explanations by Abby to her client about her managers’ instructions ‘not to get friendly with clients’, which clearly conflicts with her own values concerning how she would like her mum to have been treated.

Helpful, bright Lisa Jane Turner (Katie Proctor) is too young to fully understand the merciless pressure of her parents’ work conditions when she innocently pleads for things to be the same as they were in happier family times. Meanwhile, the manifest catalyst when a young police officer delivers a tough love pep-talk to creatively defiant, Seb, ensures that the teenager will understand good reasons for not pursuing the wrong route. These admirable efforts lead to some positive changes; nevertheless, unbearably demanding work obligations and corporate tyranny versus autonomously productive purpose seems to win out depressingly in the end. Ultimately, brutality of circumstance and painfully unfair financial penalisation stack up against Ricky until he is completely broken.

Sorry We Missed You provokes its audience to think about how working class should be defined and sustained. Tremendous performances, particularly from Hitchen, command our fullest attention. A film with plenty to say to the socialist milieu: this is a must-see.