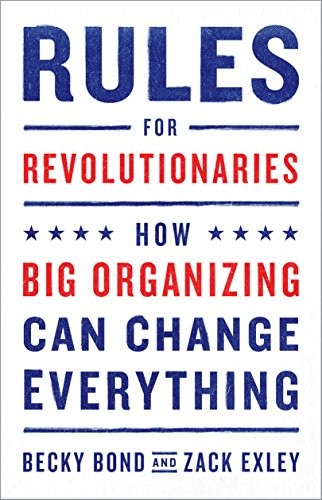 ‘Consumer software on our computers and mobile devices has transformed how people organise their lives and their interactions with each other, and it is the new expanded terrain on which organising succeeds or fails.’ Becky Bond and Zack Exley, Rules for Revolutionaries (Chelsea Green Publishing, 2016 – see http://www.rulesforrevolutionaries.org/)

Over the years of attending political party or union conferences, I have often witnessed the scene where delegates gather in their tribes outside the hall to be advised how they should vote, making sure they ‘get the line’. Lack of confidence and youth meant I never felt able to challenge or even ask why some of these decisions were made – it was just ‘the line’. Attending a recent student conference, I watched hundreds of delegates endlessly check their phones as their heads dropped before every vote – not much change in tactics – just the line is now delivered by Whatsapp.

As a former software developer, I understand the immense opportunity that technology offers. Harnessing data and developing systems for societal common good has the ability to change, enhance and, literally, save lives. However, advancing technology has a chequered history with organised labour as workers and unions often perceive the introduction of new technology and automation as a threat to collective bargaining power, skills and employment. The legacy of the short-lived, but bloody, Luddite rebellion remains as the term lives on and has evolved into the neo-Luddites of the present century. Social justice campaigners have often fared no better as technology raises concerns related to individual liberty, privacy and surveillance.

Alternatively, for capital, advancement of new technology has been essential as innovation has delivered ever increasing options for cost reduction and profit maximisation. Our economic system is designed to enhance business results and create profit so the best of tech can be seen in corporates who invest heavily in the skills and kit required for business process re-engineering, data warehousing and automation.

While our future could be defined by the progressive use of technology, we are sadly a long way off. However, the use of technology in campaigning and organising is growing as some social movements are reaping the benefits that data-driven solutions, data management systems and mass communication channels offer.

Becky Bond and Zack Exley provide the best of examples and a step-by-step guide to ‘big organsing’ in their highly acclaimed book, Rules for Revolutionaries: How Big Organising Can Change Everything (distinctly named as the flip side to the 1930s organiser, Saul Alinsky’s Rules for Radicals). While Alinsky offers a model for organising based on escalating engagement and incremental wins – Bond and Exley declare: ‘if you want a revolution you have to ask for one’.

Their strategy revolves around making a big ask and their experience was people stepped forward in huge numbers to offer their time and money. Key to their strategy was a distributed network of volunteers who were empowered and trusted to get on with the job. And fundamental to making this work was their adoption of corporate customer relationship management databases. Tailoring the system with custom code wraparounds matched with online tools including Slack and Trello, they developed the infrastructure needed to enable thousands of volunteers to staff a virtual call centre making seventy-five million calls and sending eight million texts. service and local organising forums. This enabled them to build the Sanders movement and deliver financial and electoral wins way beyond anyone’s expectations.

However, using tech isn’t just reserved for the mammoth US presidential campaigns with a firm aim on the presidential election. It is currently playing a key role in the fight to protect democratic freedoms in Hong Kong which has seen over 25% of the population take part in demonstrations, protests and occupations, undeterred by the escalating state violence designed to intimidate, stop the protests and kill the democracy movement.

Challenging the tech-authoritarianism of China has meant protesters have had to go both low-tech and high-tech to avoid detection and build their movement. Moving off grid to ensure their location and identity cannot be traced, demonstrators have ditched their contactless payment cards, travel cards and phone contracts in favour of cash, single use travel tickets and pay as you go mobiles. Covering their faces with masks and goggles not only to protect them from tear gas attacks but also to prevent their images being captured which may allow facial recognition technology to trace and monitor them.

Utilising technology, they have adopted secure messaging apps, including Signal and Telegram, enabling the protest organisers to instantly call rallies, alert supporters to ensure they avoid trouble spots with heavy police presence and call for supplies of umbrellas, clingfilm and water to protect protestors at the front of the protests. Messaging apps have allowed online voting to direct protests with large scale participation in online groups taking votes at key moments to decide instantly if protesters should carry on with occupations, retreat or reconvene elsewhere.

Closer to home, Extinction Rebellion has been shaking up the summer with a range of non-violent civil disobedience stunts and demonstrations. Its ‘self-organising structure’ enables autonomous, small, local teams to build relationships to plan and deliver both independent and co-ordinated actions. Using encrypted applications including Whatsapp and Signal to instantly share information and collaborative tools, Slack and Mattermost, for organising, the group members use the technology instinctively allowing them to pull knowledge from members that they have never met and make informed decisions in seconds.

None of this is a substitute for deep organising, building relationships and structures that stay beyond the rush of mobilisation, but technology must be seen as key to our progress. As tech rapidly develops campaigners can struggle to keep up. We need a network in Scotland to learn from each other, review tools and share hacks and tips – get in touch if you want to make this happen. And the best of it is we don’t even have to meet up to do this – we can Skype or even Zoom!

Linda Somerville is Director of NUS Scotland, a community campaigner and founding member of Save Leith Walk. You can follow Linda and direct message her on twitter – her handle is @lindasomervill