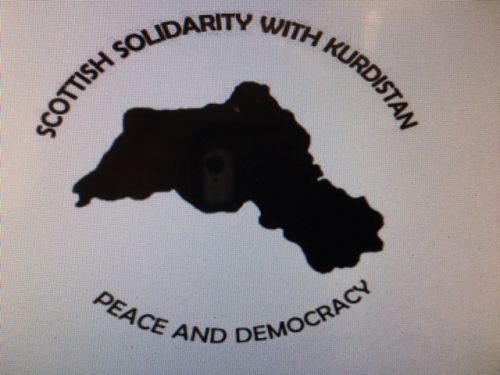 A hundred years ago, the imperial powers reneged on their promises and left the Kurds at the mercy of states that have attacked Kurdish culture, and threatened Kurdish existence. Instead of controlling their own lives, the Kurds found their lands divided up between Turkey, Iran, Iraq and Syria – and in each of these places they have faced discrimination and persecution. The world has learnt nothing from history.

After 100 years of persecution and struggle, the power vacuum at the beginning of the Syrian civil war provided an opportunity for the Kurds there to begin to take control of their own lives. By this time, the Kurdish freedom movement led by Abdullah Ocalan had moved on from Marxist-Leninist independence struggle to propagate a vision of non-state autonomy. This new alternative to capitalism is based on a radical grassroots democracy that is feminist, ecological and multicultural. The Kurds attempted to implement these ideas in the predominantly Kurdish areas of South-East Turkey, but were brutally crushed by the Turkish army. In their Democratic Autonomous Area of North East Syria, they could make them a reality. The Kurdish freedom struggle became a struggle for the freedom of everyone in the region, and it pervaded every area of life, as people learnt to take control, together, of the running of their neighbourhoods.

The Kurds have a saying, Berxwedan Jiyane, meaning resistance is Life. This resistance is not just the negative resistance of the struggle against repression; it is also the positive struggle for a better society. Its ability to give life meaning is evident in the pleasure with which women and men have committed themselves to the challenge of running their communities.

The autonomous area had been established less than two years when they came under attack from the self-declared ‘Islamic State’. Kurds fought back in defence of their homes and their existence, and their committed, disciplined, resistance turned the tide against ISIS. What ultimately proved crucial to their success was the US decision to provide air support. The Kurds knew that the US was only acting in their own interests, but for now, US and Kurdish interests coincided. Without US help, the Kurds faced death, or worse. 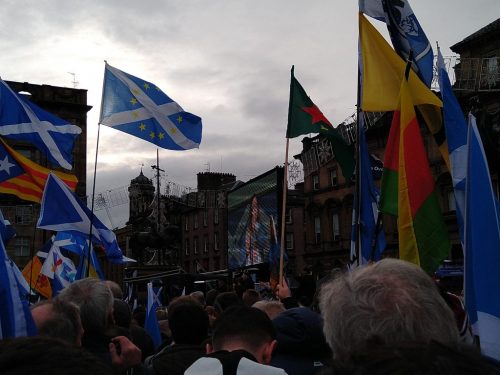 Kurds and their allies, backed by US air power, continued the fight beyond the predominantly Kurdish regions to liberate one third of the Syrian land area from ISIS. In each place they liberated, they helped establish groups that would create the framework for grassroots democracy, and they encouraged the involvement of women and of people from all ethnic groups. Their formidable Syrian Defence Forces (SDF) undertook the fighting on the ground, at the loss of 11,000 comrades; but they have no air-force and had to rely on US air cover.

When the SDF liberated the last part of Syria controlled by ISIS, we knew, even as we celebrated, that the struggle was far from over. The very fact of that victory opened new dangers, with the Kurds perceived to have fulfilled their purpose. A resurgent President Assad, backed by his Russian masters, would want control over the whole country – and then there was Turkey.

The Turkish Republic has ethnic nationalism at its foundations. The words of its first prime minister, written in 1925, still define official attitudes: ‘We must Turkify the inhabitants of our land at any price and we will annihilate those who oppose the Turks or ‘le Turquism’.’ Rules banning Kurdish language and culture aimed to eliminate the identity of the large Kurdish minority. At the same time, Kurdish areas were deprived of investment, in what has been described as a form of internal colonialism.

As a doubly oppressed group, Kurds were active in the Turkish left movements of the 1960s and 1970s, but they found that many of their comrades were blinded by an inflexible economism that prevented them seeing the racism of the society in which they had all been raised, and the importance of cultural oppression. So, Ocalan, and a small group of friends, established the Kurdistan Workers’ Party (PKK).

Turkish state control has been quick to supress the many attempts by Kurdish activists to pursue their cause through political routes, and the PKK took the path of guerrilla struggle. The response by the state has been brutal, leading to the death of around 40,000 people. Most were Kurds killed by government forces – a fact that generally gets omitted. Ocalan himself has spent the last 20 years in a Turkish prison.

Ocalan’s societal vision has reached way beyond the PKK. It is the inspiration for the Democratic Autonomous Authority in Syria, and for the pro-Kurdish, leftist People’s Democratic Party (HDP) in Turkey, whose activists and elected members face constant harassment, arrests and imprisonment. It has supporters among the Kurds of Iran, and in the Qandil mountains of Iraqi Kurdistan. But Kurds, like any other group, don’t all share the same politics, and the Kurdish Regional Government in Iraq is feudal, corrupt, and neo-liberal in its economics.

At the same time as imagining a new society, the imprisoned Kurdish leader has been persistent in the pursuit of a peaceful solution to the ‘Kurdish Question’ that would allow Kurds to live in Turkey in dignity. At time, hopes have been raised, but former Prime Minister, and now President, Erdoğan seems to have decided his political ambitions were better served by taking a hard line. The cause of peace has not been helped by the US and Europe siding with Turkey in designating the PKK a terrorist organisation, despite a recent Belgian court conclusion that the PKK should properly be considered ‘party to an armed conflict’. But terrorist designations are guided by realpolitik rather than the court logic.

Across the world, the decline of left opposition has allowed space for rightwing and religious groups to win support through a smattering of populist actions and efficient organisation, and Erdoğan’s Justice and Development Party (AKP) fits this pattern. Its neoliberal economic policies also ensured a welcome from world leaders, but its crony capitalism has been combined with a growing authoritarianism. A brutal crackdown on minorities, especially Kurds and critics of the government, is backed up by rigid censorship and the deliberate stoking of ethnic prejudice and religious hatred. The failed coup of 2016 provided Erdoğan with an excuse for an even more brutal clampdown. Although he put the blame for the coup on his former ally, Fethullah Gülen, this clampdown extended to all his critics and perceived enemies.

The current Turkish government is a coalition of Erdogan’s AKP with a more consciously far-right group, but it is no longer an exaggeration to describe the whole of the Turkish government as fascist. Fascist is not a term to use lightly, but this repressive, dictatorial regime, uniting – and also dividing – the country through an aggressive ethnic nationalism fits every definition of it. As a regional power with imperial ambitions, Turkey was quick to intervene in Syria. The government is driven by expansionist dreams of a new Ottoman empire with Turkey at the centre of the Muslim world; by a visceral hatred of the Kurds, who have dared to resist assimilation; and by political pressures at home – including a weak economy, that can be pushed into the background by uniting against a common external ‘enemy’.

Turkey has been the main sponsor of Islamist groups opposed to the Syrian regime, who have been responsible for extreme brutality and repression, and there is a wealth of evidence from those on the ground proving Turkey’s active support of ISIS fighters.

Turkey has also carried out three unprovoked invasions targeted at eliminating Kurdish control, and ultimately Kurdish existence, in Northern Syria. The first ensured that the Kurds were unable to link Afrin, in the west, with the rest of the land that they controlled. The second, early last year, occupied Afrin, making over 100,000 people refugees, and turning the province into a playground for warring ‘jihadi’ gangs. Having got away with this, Erdoğan effectively announced to the UN his intention to invade the whole border area and clear out the Kurdish population. All that was preventing him launching his attack was the presence of US troops.

While Turkey is a member of NATO, it has also been flirting with Russia. The US doesn’t want to find itself fighting a NATO member, and nor does it want to drive Turkey into Russian arms. Before Trump’s announcement of troop withdrawal, it had agreed major concessions to Turkey, including making the SDF dismantle its border fortifications. What persuaded Trump to pull out is harder to say. No one deems this to be in US interests, which is why the Kurds were taken by surprise. Trump seems easily swayed by his admiration for autocrats.

As soon as the US stood back, Turkey was free to invade, which it did with all the violence the Kurds had come to expect. Air attacks from the second biggest military force in NATO have been targeted at civilians and vital infrastructure, and evidence is being collected of the use of white phosphorus. Meanwhile, Turkey is paying militants who fought with Al Qaeda and ISIS to fight as frontline troops and terrorise the population. ISIS prisoners have been able to escape and join sleeper cells that can attack at any time.

All this is possible because it suits Russia to let Turkey attack. In supporting Turkey, it is weakening NATO. Russia is also content to see Kurdish power cut back and the Kurds forced to seek help from the Assad regime. That Assad is recognised as the lesser evil, is a measure of the extreme nature of Turkish-sponsored violence. Assad’s Syria is another autocratic regime with no tolerance of dissent or free speech. It previously clamped down on Syria’s Kurdish minority, banning Kurdish schools and festivals and refusing to recognise many Kurds as citizens. Assad’s forces are of only limited help, as Russia controls the airspace and does not want to clash with Turkey.

Meanwhile, European countries are reluctant to do more than criticise. Turkey is not just a trade partner, and customer for European weaponry. It is a border guard keeping immigrants and refugees out of fortress Europe, for which Europe pays billions of Euros. The 3.6m Syrian refugees who have found an uneasy shelter in Turkey, and have added to the Turkish government’s domestic pressures, have become pawns in Turkeys’ imperial game. They will be used to displace the Kurds. And any time Europe protests, Erdoğan threatens to send the refugees into Europe instead.

Horror at what is happening has led to various suggestions for external intervention. If this is primarily driven by fear of losing political influence, and if it is not prepared to stand up to Turkish aggression, then it could inflame the situation and make it even more dangerous. The UN never manages to rise beyond the interests of its constituent parts and fulfil the hopes invested in it – and they have not even included the SDF in their deliberations on Syria’s future. Yet, an internationally enforced no-fly zone and peacekeeping force are desperately needed.

As activists, we continue to call for genuine international intervention, and for meaningful sanctions on Turkey, and a full ban on arms exports. Governments will only act if we push them. We also call for a boycott of Turkey, and especially of the Turkish tourist industry, because a weak economy is Erdogan’s Achilles heel. We show our solidarity with the people of North East Syria, and, crucially, we call on everyone to help keep alive and strengthen the vision for a better world that the Kurds and their neighbours were making a reality. This should be central to our ideas and our practice. Berxwedan Jiyane!

Sarah Glynn is co-convenor of Scottish Solidarity with Kurdistan