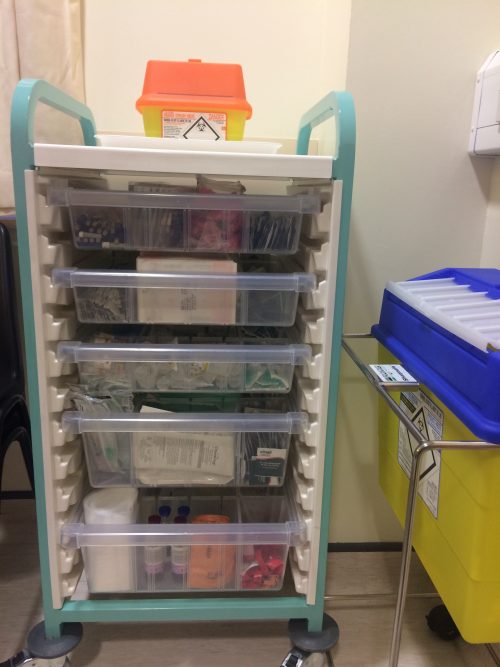 In September 2005, actor, Mike Myers, and hip-hop artist, Kanye West, appeared on US television to solicit donations as part of a celebrity-driven fundraiser for the displaced victims of Hurricane Katrina. It was during their segment on the hour-long A Concert for Hurricane Relief that West suddenly abandoned the autocue to declare that: ‘George Bush doesn’t care about black people’. West used the platform afforded him to draw attention to how an environmental disaster had developed into a humanitarian crisis disproportionately affecting black and poor communities. In calling out the Bush administration, West exposed the thinly veiled truth that the federal government’s use of a discourse of disaster and emergency belied the reality of their sluggish response to the crisis.

Writing in the aftermath of Katrina, and the subsequent displacement of African Americans from prime downtown real estate, cultural critic, Naomi Klein, echoed West’s claim by interpreting the Bush administration as proponent of what she termed ‘disaster capitalism’. The residents in districts like the lower ninth ward, and in other areas of the city destroyed by the floodwaters, had the misfortune of being too black, occupying housing too valuable to covetous real estate prospectors and being disenfranchised from federal politics (in 2000 Bush won all 9 electoral college votes in Louisiana despite only 10% of African Americans voting nationally, 90% of whom voted for Al Gore).

As the Black Lives Matter movement continues to reveal, the contemporary structuration of American society along racial lines of division remains complicated and multi-faceted. It is not the intention of this article to make clumsy lines of association between African American poverty and the rising levels of inequality blighting the poorest communities in Scotland. However, I take as my starting point West’s remark to show how, in Scotland, the language of disaster has been mobilised in Holyrood to decry inequality, while being accompanied by a similarly listless policy response.

This discourse of disaster has recently featured in the reportage mobilised to document the National Records of Scotland’s (NRS) report on drug-related deaths, published in July of this year. The fallout of the NRS report, ‘Drug-related deaths in Scotland in 2018’, has created headlines across the world. The New York Times, on 7 August 2019, carried an investigative piece high on the front page of its online version that followed the lives of drug users in Glasgow, along with various graphic depictions detailing the misery of life in modern Scotland. It was with a mixture of surprise, sadness and incredulity that the New York Times observed that: ‘[o]ver doses are more common in Scotland, by some measure, than even in the United States’; this all within a country whose booming tartan culture industry manufactures dewy-eyed romanticism like the television show Outlander while having ‘a higher baseline rate of both drug and alcohol misuse’ than the U.S. and a society characterised by a ‘chronic underinvestment in public health’.

The NRS report paints a grim portrait of a country struggling to get a handle on the issue of drugs – or having already lost it. The attention-grabbing statistic that drug-related deaths in Scotland increased 27% between 2017 and 2018 has been reprinted with such frequency that it is now a macabre meme recalling the unfortunate tagline of Scotland as ‘the sick man of Europe’.

The NRS report also makes particularly uncomfortable reading for a Scottish Government eager to portray an image of a policy agenda that embraces a social democratic form of ‘Scandi-utopianism’ and prioritises social inclusivity in such a way that renders it distinct from the rest of Britain. Yet since 2007, when the Scottish National Party formed a minority government, the number of drug-related deaths has more than doubled. Between 2008 (574 deaths) and 2013 (727 deaths), there was relatively little fluctuation in the numbers, but from the symbolically important date of 2014 onwards, there has been a sharp spike in the number of deaths: 614 in 2014; 706 in 2015; 868 in 2016; and 934 in 2017, culminating in 1,187 deaths in 2018. The SNP won a majority of the vote in the 2011 election and the right to form a government in Holyrood, yet this period of SNP government has coincided with an acceleration in the number of drug-related deaths in every year it has been in power.

The media has made much of the so-called ‘Trainspotting Generation’, a demographic predominantly male, now aged between 35 and 44 years old, and a group that accounts for approximately 26% of all drug-related deaths in Scotland. Written in a dispassionate and coolly bureaucratic tone, the report outlines that 1,017 or 86% of all deaths were caused by ‘accidental poisoning’. The underlying causes are classified under the following taxonomic headings: ‘drug abuse’; ‘accidental poisoning’; ‘Intentional self-poisoning’; ‘assaults by drugs, etc’; and ‘undetermined intent’. As is to be expected from an apparatus of government that deals in the quantitative and not the qualitative, there is no attempt to understand how these chosen headings are a manifestation of the same underlying issue: gross social inequality. People are literally dying on the streets of Scotland as a result of socio-economic inequality.

Coinciding with the publication of the NRS report, the collaborative research partnership between the University of the West of Scotland and Oxfam produced a report entitled ‘On Target for 2030? An independent snapshot review of Scotland’s progress against the United Nations Sustainable Development Goals’, a document that sets out to map the Scottish Government’s progress against a set of indexed social coordinates. While the report’s authors commend the limited progress made against UN indicators such as ‘No Poverty’, ‘Zero Hunger’, and ‘Good Health and Well-being’, any impulse towards a Scottish Ministerial triumphalism is undercut by the fact that, according to the report, ‘poverty is now rising, especially amongst children’ in light of the overall lack of ‘urgency’ shown by law-makers to tackle poverty. This critique of a slumberous policy is echoed in the report’s analysis of the ‘little substantive progress’ that has been made in the government’s attempts to eradicate hunger by 2030; if anything, the report urges the Scottish government to adopt ‘bolder action […] especially given the growing inequality between more and less affluent households’. A portrait of inaction emerges in the discourse deployed by the contributors to the UWS-Oxfam report which establishes a clear dissonance between the discourse of national emergency and the actuality of governmental inactivity to enact radical policy solutions.

Since the publication of the NRS report, the Scottish Government, and supporters of independence more broadly, have been zealous in their attempts to redirect culpability elsewhere, based on the constitutional prohibition reserving drug policy to Westminster. Counter-arguments that emphasise the methodological difference in how statistics are collated in England and Wales belies the fact that people continue to die while the government ventriloquises a language of national emergency. Joe FitzPatrick, the Scottish Government’s Public Health Minister, invoked the language of crisis when referring to an ongoing national ‘emergency’ on the issue of drugs, which prompted him to write to the then Home Secretary, Sajid Javid, inviting him to a ‘summit’ to discuss ‘how we can work together to help stop the increasing number of drug deaths in Scotland’. While FitzPatrick, the SNP and the more uncritical supporters of independence have been quick to disavow responsibility, to redirect the blame and to re-invest a collective ire towards Westminster, they have, paradoxically, been keen to garner credit for the spectacular drop in knife crime.

Glasgow, in particular, has been held up as a sociological model of how to combat knife crime by those seeking a solution to the current blight on London’s streets. This reduction in knife crime has come about from a radical rethinking of policy – one which the SNP seems reluctant to repeat on the issue of drugs – which resulted in a reframing of knife violence towards both a causal model and, crucially, a discourse of public health. Therein lies a troubling question for the Scottish Government: why does it refuse to approach drugs in a similarly holistic way, even if legislatively neutered by London? Why has it cowered away from implementing the sort of action that would see it go head-to-head with the Westminster Government – the spectacle of Home Office stooges deployed to close ‘fix rooms’ north of the border would be manna from heaven for independence strategists – and to address a problem that its own representatives have configured in the language of a national disaster and national emergency?

There are, of course, a myriad of complicated socio-economic reasons relating to the rise in drug-related deaths in Scotland – too many to articulate here. But what remains undeniable is that they are socio-economic in origin, with an added emphasis on the economic. The NRS identifies the largest killer within Scotland’s drug taking community as ‘accidental poisoning’, but the manifest causation is inequality.

The Salmond-ian neo-liberal vision of Scotland and free-market ideologues within the independence movement have a dual interest in presiding over the collapse of order within Scotland’s poorest communities. The horror of drug-related deaths in Scotland can be weaponised as a potent means by which to launch another political sortie against ‘the Union’, as evidenced by the speed and vigour in which blame has been redirected to Westminster for its refusal to sanction drug consumption sites in Glasgow. Disaster capitalists like the current Finance Secretary, Derek Mackay – for how else to interpret his enthusiastic outsourcing of state responsibility to nefarious private corporations like Barclays Bank, with its origins in slavery, in Kilmarnock? – provide a glimpse into the future of an independent Scotland in which all aspects of the state apparatus can be auctioned off to private enterprise to fix the social issues that government refuses.

Yet, there is one final explanation for the Scottish Government’s lotus-eater response to the increasing inequality underpinning the drug-death crisis in Scotland and a governmental refusal to act radically: independence itself. A powerful demographic of voters emerged in the aftermath of the 2014 Scottish Referendum – ‘soft’ yes and ‘soft’ no voters – that has stymied radical thinking at the level of governmental policy in Scotland. This new, liberal, middle-class, constituency of the Scottish electorate has benefited disproportionately from a raft of bespoke SNP policies that owe more to ‘nudge theory’, than to any authentic socialist or humanitarian impulse. Simply put, the Scottish middle classes have attained even greater importance in the eyes of nationalist strategists on account of their propensity to vote. The language used may be of emergency and expediency, but the actual message emanating out of Holyrood is as obscene as it is clear – it is a message that recalls West’s critique of a federal government that privileges the lives of wealthier citizens above the most vulnerable. The only logical way to understand the rise in homelessness, the rise of child poverty, the rise in hunger and the rise in drug-related deaths in Scotland is as further evidence for a truth that has become undeniable. This is that the Scottish Government doesn’t care about poor people.

Robbie McLaughlan lives in Glasgow and is a Lecturer in English Literature at Newcastle University.