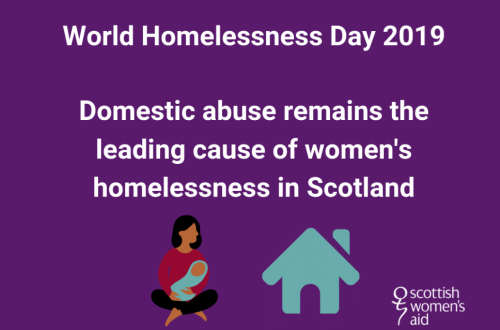 As we approach the period of the 16 Days of Activism Against Gender-Based Violence (25 November to 10 December), Scotland is in the middle of our first year of implementing a world-leading new domestic abuse law. At Scottish Women’s Aid, we exist to work for a Scotland free of domestic abuse; a future where women, children and young people enjoy all of their human rights and have equal opportunity to explore all of their ambitions and aspirations. Scotland’s ground-breaking new law on domestic abuse, which came into force on the 1 April 2019 was a significant step in the right direction.

Coercive and controlling behaviours are now criminalised meaning that the emotional and psychological abuse that women and children have been telling us for decades is the most traumatic and the hardest to recover from is now reflected as such in the law. It’s a course of conduct offence, reflecting the fact that abuse is made up of many tactics over time. This law is also the first to put children on the face of domestic abuse legislation, allowing the judiciary to impose harsher sentences when children are involved. All of this is great news for those experiencing domestic abuse. However, implementation of our new law is not the end of the work to stop domestic abuse. With 1 in 4 women in Scotland experiencing domestic abuse in her lifetime we cannot afford to consider the work completed.

Violence against women is both a cause and consequence of women’s inequality and to end one we must end the other. Interventions need to be early and effective and our society must actively reject all forms of violence against women and girls. It is vital that women have the opportunity to thrive as equal citizens socially, culturally, economically and politically.

We know that women start out poorer and are less likely to have job security or own their home. They’re doing most of Scotland’s unpaid caring work and they’re desperate for affordable childcare. In the context of domestic abuse, where financial control is often a tactic, the prospect of financial independence is even further restricted. All of this combines to create a scenario where, for many women, ‘leaving’ abuse will mean poverty, homelessness and destitution for them and their children. Indeed, domestic abuse is the leading cause of women’s homelessness in Scotland.

One woman who participated in our Change, Justice, Fairness research on this topic said: ‘You’re destroyed. I mean yeah, you eat, you drink, you sleep, you talk but you’re dead inside and you can feel it. You feel so down, so low, you wish the floorboards would open up and swallow you. It’s so embarrassing. Yeah, you just think, oh gosh, I should have let him kill me because that would have ended it. It’s just agony, agony, agony.’

We have campaigned loudly on the need to change this picture and we recently took over 100 messages from the public about this to the First Minister. Following this meeting, and campaigning from us and others over a number of years, the First Minister announced that new legislation will be introduced to the Scottish Parliament that will give courts and police new powers to remove abusers from the home, rather than victims having to leave. This Bill, if passed, would be an immediate and significant improvement. We are keen to keep this high on the political agenda and we will be engaging with the Scottish Government on the detail of the Bill, as well as calling for support from voices from across the political spectrum.

We will continue to call for protection and justice for women and children and we will keep stressing the need for appropriate responses to perpetrators – responses that do not minimise or excuse their behaviour, but rather hold them to account for the insidious patterns of abuse that they carry out. We will keep pushing for equality in all spheres and working to break down the barriers that hold women and girls back.

The words and experiences of tens of thousands of Scottish women and children are echoed in those words from the aforementioned woman saying, ‘It’s just agony, agony, agony’. Scotland can and must be better than this. 16 Days is a chance to highlight the need, but the efforts must continue year-round. Roughly 60,000 domestic abuse police calls a year are an indicator of women’s inequality. When we work on tackling both, we change Scotland for everyone.

• Change, Justice, Fairness was a research report on homelessness as a result of domestic or sexual abuse, produced in collaboration between Scottish Women’s Aid and a Community Research Team in Fife. http://womensaid.scot/wp-content/uploads/2017/07/Change-Justice-Fairness.pdf