Scotland’s energy unions have long argued for a planned energy policy that provides safe, secure and sustainable generation, which contributes to the economic future of Scotland and eliminates fuel poverty. While unions have supported the growth in renewable energy, we remain sceptical about the Scottish Government’s renewable energy target. The strategy has never set out targets for the different elements of energy generation and this has led to growing uncertainty about how to provide ‘baseload’ and ‘dispatchable’ (emergency top-up) power.

As Professor Colin McInnes, from Glasgow University says: ‘We need to have an energy policy that is technically well-founded, we need a balanced energy mix. Instead of what should have been a simple matter of energy economics, we have seen the debate politicised by a 2020 target to achieve the ‘equivalent’ of all of Scotland’s energy needs by renewable energy. Why would you want such a target? It’s an arbitrary number thought up by spin doctors for a purely political purpose’.

This chart shows the different elements of Scotland’s power generation. On the face of it, all looks fine. We have nearly 11GW of capacity against a peak demand of 5.4GW. 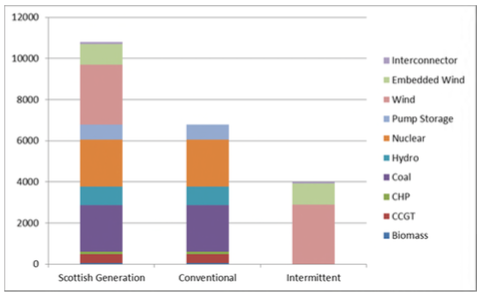 However, a closer look reveals two main problems. First, most of the conventional generation is due for closure in the near future. Nuclear and coal are the backbone of Scotland’s baseload and dispatchable energy. Second, we are heavily reliant on intermittent sources of energy, primarily onshore wind. While it may not feel like it, the wind doesn’t always blow in Scotland and that means we are now importing energy from England for part of one day in five. Exporting good jobs south of the border may work for National Grid’s planning and some environmental groups, but it’s not going to win many votes from our members in the energy industry.

Renewables now generate almost half of Scotland’s energy needs. However, this comes at a price. Economist, Tony Mackay, argues that the subsidies paid to onshore wind farms in Scotland are ‘unnecessarily high’ and have led to ‘supernormal’ profits for businesses and landowners. As a consequence electricity bills in Scotland are now around 7-10% higher than they would be without subsidies.

The promised economic and job benefits haven’t fully materialised, as former energy minister, Brian Wilson, said: ‘I find it bitterly disappointing that so little of the manufacturing associated with wind farms in Scotland has been carried out here. That is a major failure on the part of the Scottish Government and does no credit to the biggest developers, Scottish Power and SSE, who have had the benefits of major planning consents and vast subsidies through the Renewables Obligation but failed to reciprocate by creating an industry worthy of the name’.

A key debate in Scotland will be the use of unconventional gas (usually called fracking) to feed the INEOS plant at Grangemouth and potentially a gas fired power station to provide the dispatchable energy the system needs. Most unions support a moratorium on grounds of safety and doubt the need for new unabated fossil fuels. These concerns have been reinforced by the recent DEFRA full environmental assessment on fracking. Previously omitted sections show leakage of waste fluids from fracking processes has resulted in environmental damage in the US and the impact on water-resource availability, aquatic habitats and ecosystems, and water quality was ‘uncertain’.

The Scottish Government moratorium appears not to cover testing and preparatory drilling, or Underground Coal Gasification (UCG), a technique many consider more dangerous than fracking that is technically offshore but requires onshore infrastructure. As Daniel Sanderson put it in the Herald: ‘A moratorium that, five months on and with INEOS never planning to be engaged in full-scale fracking for several years anyway, is yet to have been shown to be anything other than an exercise in political misdirection’.

Despite recent reductions in energy prices, we should not forget fuel poverty remains a huge problem in Scotland. Earlier this year, an analysis from the House of Commons library showed the average household’s annual energy bill is now £260 more than it was in 2010. Electricity and gas bills for the poorest households rose 53% in cash terms between 2010 and 2013. There is no prospect of achieving the legal obligation to eliminate fuel poverty next year.

Whether it is price or generating capacity, the energy market has dismally failed. At energy industry events, I often allow myself a wry smile when civil servants are quizzed about Energy Market Reform (EMR) mechanisms, which are in effect state planning of energy, introduced by a Tory government. This was supposed to be a temporary process, but no one is predicting its imminent demise. In fact, governments across the world are getting more involved in energy planning. It’s simply too important to leave to the market.

In the energy chapter of the ‘Red Paper on Scotland 2014’, I set out a different energy strategy for Scotland based on common ownership and a more diverse generation ownership model. Key features were:

• A strong political vision over the long term, with commensurate policy and planning provisions.
• Favourable feed-in tariffs to create the incentive for new generation using different business models.
• A state-owned grid that will usually connect up communities. The cost is repaid through a public service obligation payment in energy bills.
• A clear focus on energy efficiency with measures to tackle hard-to-heat homes.
• Strengthen the ability and willingness of local government to get involved.

In conclusion, energy unions are not arguing for new unabated fossil fuel generation and we support a strong renewable industry – although we would want to see greater employment benefits. However, onshore wind power alone is not the solution and we, therefore, need a balanced energy policy that ensures security of supply, builds a more diverse industry and eliminates fuel poverty.

Dave Watson is the head of campaigns at UNISON Scotland and editor of Utilities Scotland (www.utilitiesscotland.com)