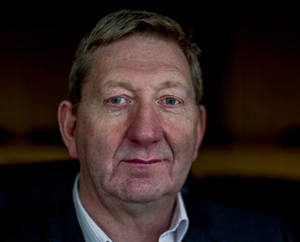 Jimmy Reid was a giant of our movement. A trade union leader and a man of great humanity he led industrial disputes with ingenuity and courage. It is a personal honour for me to have the opportunity to pay my tribute to him and his many accomplishments as one of Scotland’s most prolific industrial and political fighters.

Reid – a great son of Glasgow – left a mighty imprint on the trade union and labour movement. A towering figure of our movement during his life, it is right that many of today’s leaders of the left have paid their own tribute to his enormous contribution. And for any trade union leader, Reid’s fighting back spirit lives on as an inspiration for taking forward our agenda in the modern world. His determination in struggle and his unique style of challenging injustice remain both relevant and revolutionary even as time passes.

The son of a shipyard worker from a large family his experience of society’s injustice began at home, losing three sisters all under 18 months. Speaking about his upbringing he talked of his experience of not getting enough to eat and living in disease ridden slums where TB and diphtheria were rife. He said: “I hated the system that, in the midst of plenty, allowed millions to die in the slums of the ‘30s”. As a trade union leader and political figure he challenged the inequality and unfairness at the heart of the Britain in which he was raised and had he been alive today he would have carried forward that fight with the same vigour.

He left school at 14 and started out in a stockbroker’s office but soon left in favour of what he viewed as the industrial credibility of the engineering sector and as a shipyard engineer took part in the apprentices’ strike of 1952. He joined the League of Labour Youth and gravitated quickly towards the Communist party – at the time a major force in industrial Scotland.

Jimmy claimed his education was formed predominantly from listening to the speakers at Govan Cross. This education no doubt influenced his development to become one of Scotland’s most impressive trade union leaders. As a young man, he quickly gained prominence as an apprentice organising a strike after discovering he was paid half of the amount it cost to kennel a dog. Throughout his life he refused to accept the lot of the ordinary worker; he rejected the subjugation of workers by unscrupulous employers and fought for their pay and conditions to reflect the value of their work as well as their need to live a dignified life.

He campaigned on the issue of pensions and the rights of the elderly taking a petition to Downing Street of 300,000 names. Speaking about his drive to win better conditions for retired workers he cited the hardships endured by his mother as his inspiration. He credited his mother as being a profound influence on his politics. It was the lack of opportunities and hardships he saw for his parents’ generation that pushed him into political activism in the first place.

He did spend time in London as leader of the Young Communist League, returning in 1964 as the party’s Scottish Secretary with a bright future ahead of him in the party, although it was when he returned to his home shipyards his public profile was raised.

Jimmy will forever be remembered for leading the famous lock-in at UCS. It was through this that he caught the imagination of people from around the world and gained the support and solidarity of international trade unions.

When the Conservative government refused to offer state-support for the shipyard despite it having a full order book and projected profits in 1972 it put at risk the jobs of over 6,000 workers. Reid and the other shop stewards knew that a conventional strike would be self-defeating allowing the workers to be locked out and UCS closed down. Instead they locked out the management completing company orders and proving the value of the site. In the end the Heath government backed down and the yards were saved.

At the time he said: “We are taking over the yards because we refuse to accept that faceless men can make these decisions. Even today the memory of workers taking the lead and proving the worthlessness of the boss-class serves as an inspiration. He believed that workers could take industrial action and behave with “responsibility, and with dignity, and with maturity”.

If confirmation was needed that Jimmy Reid was one of his generation’s towering political figures, it came in the form of his rectorial address at Glasgow University. His speech was so powerful it won him plaudits as one of Scotland’s most impressive orators of his time. The full text of his address was reprinted in the New York Times with that paper describing it as “the greatest speech since President Lincoln’s Gettysburg address”.

It confirmed Jimmy Reid as one of our greatest political thinkers and I believe it should be considered required reading for any trade union activist. He talked of the concept of alienation; the “cry of men who feel themselves the victims of blind economic forces beyond their control. It’s the frustration of ordinary people excluded from the processes of decision making. The feeling of despair and hopelessness that pervades people who feel with justification that they have no real say in shaping or determining their own destinies”.

Most memorable was his outright rejection of the insidious unfairness and inequality that has pervaded society for generations. He mounted a stark defence of the humanity and dignity of all people in the face of economic failure, poverty and despair calling on his students at Glasgow University to reject the “rat race”.

He demanded of them: “Reject these attitudes. Reject the values and false morality that underlie these attitudes. A rat race is for rats. We’re not rats. We’re human beings. Reject the insidious pressures in society that would blunt your critical faculties to all that is happening around you, that would caution silence in the face of injustice lest you jeopardise your chances of promotion and self-advancement. This is how it starts and before you know where you are, you’re a fully paid-up member of the rat-pack. The price is too high. It entails the loss of your dignity and human spirit”.

Dignity and spirit. Two words which embody the legacy of Jimmy Reid and the class he represented.