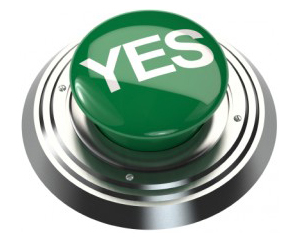 Over the past year, the YesScotland Campaign team has been working hard to win the argument about independence. Opinion polls suggest that we have much more work to do but this campaign is like running a marathon rather than a short sprint.

Over the next twelve months, we aim to redouble our efforts to win the hearts and minds of the people of Scotland by persuading them that independence will improve their lives. Of course, we have a massive job to convert enough people to our cause but I have every confidence that our YesScotland team is up for it.

I myself am a convert to the cause and my conversion is not based on emotion. It is based on my experience, particularly my Parliamentary experience. Having spent 26 years as a Member of the Westminster Parliament and eight years as a Member of the Scottish Parliament, I have come to the conclusion that Westminster is completely out of touch with the people of Scotland, whereas the Scottish Parliament responds more readily to the values, the needs and the aspirations of the people of Scotland.

For many Scots, Westminster is a different political planet whose inhabitants are completely oblivious to the real world.

On issues like land reform, free care for the elderly, financial support for students and free prescriptions for people who are ill, the Scottish Parliament has proved to be far more radical and far more progressive than Westminster.

At present, too many important decisions are taken at Westminster but the Westminster agenda is becoming increasingly different from the preferred agenda of most Scots. This divergence of agenda has been going on now for some time.

I recently came across an old election leaflet which was used by me as a Labour candidate during the 1979 General Election Campaign. It began:

“The result of this election will determine the kind of society we shall have for many years to come. Do we want a greedy, grasping rat-race where only the strongest survive and the weakest go to the wall? Or do we want a caring, sharing society based on the principle that most help should go to those who are most in need?”

In that General Election, Scotland voted for the latter option. The UK as a whole voted for the former. We all got a Prime Minister who told us that there is no such thing as society.

In twelve months time the people of Scotland have another opportunity to determine the type of society we have for many years to come. How we vote in next year’s referendum will be one of the most important decisions not just in our lifetime but in the entire history of Scotland.

We face a stark choice; do we want more austerity under the Union or do we want the opportunity of a fresh start in an Independent Scotland ?

Much of the negative propaganda of the No campaign is deliberately designed to create a climate of fear and uncertainty. In an independent Scotland, what will happen to our pensions and benefits? What about our mortgage rates? How much tax will we have to pay? And what about our currency?

On currency, critics have attacked the YesScotland campaign because some of our members, including myself, have a different view from that of the SNP Government. Yet some of the same critics also claim that YesScotland is just a front for the SNP. They cannot have it both ways.

YesScotland is a broad, inclusive organisation, embracing people of different political parties and people, like myself, who are not members of any political party. It would therefore be surprising if there were not differences of opinion on some matters, including currency. But what unites us is our firm belief that independence for Scotland would ensure that the people of Scotland would be empowered to choose their own Government, unlike the status quo which ensures that all the big economic decisions are taken by a government we did not elect.

When the naysayers talk about uncertainty, they ignore the fact that, in politics, there are many uncertainties. The truth is that there are as many if not more uncertainties if we choose to stay in the UK than there are if we choose independence. No-one can say with certainty what the rates of interest, tax or benefits will be in five or 10 years time if we stay in the UK. Any politician who tries to tell you otherwise is a snake-oil salesman.

But there is one thing for certain; if we stay in the UK, we shall suffer more austerity because that is the agenda of all the major parties at Westminster. Scotland is at present being ruled by a UK Government which is rewarding the rich with massive tax hand-outs and punishing the poor with savage cuts in benefits, including the iniquitous bedroom tax. Who ever dreamt that any government would stoop so low? It is Robin Hood in reverse: robbing the poor to pay the rich.

So what is the alternative? Ed Milliband, Leader of the Opposition at Westminster, has failed to give any firm commitment to reverse the benefit cuts or even abolish the bedroom tax if and when Labour regains power. Labour has lost its soul as well as its moral compass and the Scottish Labour Party is just an adjunct of the British Labour Party.

The Westminster consensus means wasting billions of pounds on weapons of mass destruction such as Trident instead of investing in people, including the most vulnerable members of society.

For example, there is a high regard in Scotland for social justice. When Margaret Thatcher came out with her infamous dictum that ‘there is no such thing as society’, she obviously had a receptive audience in Middle England but there was little if any resonance in Scotland. She later boasted that her proudest legacy was the creation of New Labour and her legacy lives on at Westminster on the Opposition as well as the Government benches. For many Scots, Westminster is a different political planet whose inhabitants are completely oblivious to the real world.

In twelve months’ time the people of Scotland will have the opportunity to choose a different pathway; a pathway of hope rather than despair. We can choose to continue as junior members of a discredited Union where the economic consensus has brought us to the brink of bankruptcy and the political consensus is making the poor scapegoats. Or we can start afresh with independence and try creating a caring, sharing society where the freedom of people is more important than the freedom of market forces.

The aim of creating a fairer society should not be confined to Scotland. I am not a nationalist and many of my friends in YesScotland are proud to describe themselves as internationalists. Our concern for our fellow human beings is not limited to one country or one race. We are all members of the human race and international solidarity is not something that was invented by the United Kingdom and is certainly not dependent on the unity of any kingdom.

The Westminster agenda is becoming increasingly anti-European and xenophobic with the UKIP tail now wagging the Tory dog and the British Labour Party blaming immigrants for taking British workers’ jobs. An independent Scotland, as a full member of the international community, would be able to pursue a different agenda, based on respect for our fellow human beings throughout the world and recognition of the valuable contribution made to this country by people from other countries who have chosen to live and work in Scotland.

Independence is therefore not an end in itself. It is a means of empowering the people of Scotland to shape their own future by building a better Scotland, a more prosperous Scotland, a fairer Scotland. It will also enable us to play a full part in the international community, to help to build a better world.

When we succeed in getting that message across to the people of Scotland, we shall win a famous and historic victory.