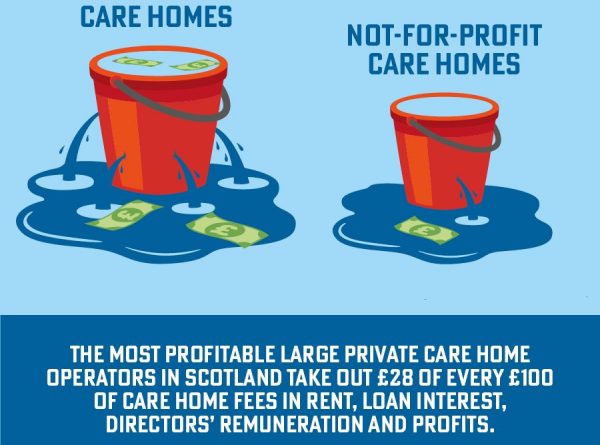 The Scottish Government has published its National Care Service Bill. The title evokes the National Health Service – this title though is deliberately deceptive, evoking as it does the affection felt towards the NHS. The reality of the Bill are proposals to destroy local government as a viable tier of democracy, outsource 75,000 jobs – as a start – and massively centralise decision-making about everything from home care to criminal justice social work and a whole lot in between. Care, as it is now, will be provided for profit – and the reach of market mechanisms will be extended to all of social work services.

The Bill if passed will mean legal responsibilities for adult social care services transfer from councils to newly created Care Boards when the NCS is set up. Children’s services criminal justice services and the rest of social work can be transferred out of councils whenever government choose – and it’s the Scottish Government’s declared intention that they do.

The Scottish Government will not run these services directly. Instead, they will set up Care Boards to commission and organise services. In a development from previously announced plans, Boards will be allowed to directly deliver services – but, and this will become something of a theme, there really is not any detail about that.

There are two main aspects to the Bill: what it contains and how the system will work – which is worrying; and, what they are telling us just to take on trust – which is even more worrying.

Take the Care Boards, for example. How many will there be? Who will sit on them? How long for? Will staff get any sort of representation? None of these things are in the Bill. The Scottish Government says all of these things will be decided by ‘a process of co-design’ involving all interested parties after the Bill is passed into law. For those wondering what co design means. Think of it this way, when minnow Partick Thistle playing majors, Celtic or Rangers, the result is decided by ‘a process of co-design’.

Co-designer in chief, and the only person who really counts will be Kevin Stewart MSP, Minister for Mental Wellbeing and Social Care. What the Bill is very specific about is that it is he who picks who goes on care boards, how long they stay there – and he can remove them at any time. Care Boards will have to have all of their plans approved by him. He will determine their budgets and priorities and can remove responsibilities – or add them – as he sees fit. It’s a vastly centralising move, but if you ask how all this power that is being gathered to the centre is going to be used, the Scottish Government is saying it will tell us later. It is asking people to buy a pig in a poke. You don’t have to be a vegan to think that is a bad idea.

We do know some things though. The Financial Memorandum accompanying the Bill says the new care regime will see the transfer out of local government of ‘up to 75,000 employees across social work and social care’. Bear in mind that once the scheme is fully operational, councils will have no legal necessity to employ any social work staff at all. Indeed, councils will only have social work to do if their social work departments win contracts from the Care Board. Essentially, the council will be an employment agency and councils can be prevented even from being allowed to offer to provide the services that are currently their legal responsibility.

Of course, staff will have TUPE rights if they are transferred out either to direct employment by a care board or, much more likely, to another provider. TUPE protections are limited and crucially do not include pensions. The impact of this goes far beyond individual workers. Taking this number, or anything like it, of contributors out of local government pension schemes will not be without impact on the schemes themselves.

Councils meanwhile will see a straight 33% cut in their budget as estimated by the Institute for Fiscal Studies given the funding comes out of their budget and goes to the Care Board. A cut of this magnitude will have repercussions all across the council. Councils will have far fewer responsibilities, staff and even buildings as Bill allows ministers to transfer property to ‘new providers’. It’s not Nostradamus level predictions to foresee cuts in personnel, finance, facilities management, maintenance and doubtless more.

In one of the few points where the Bill goes from a ‘This space is intentionally blank and will be filled in by Scottish Government Minister at a point later when your objections will be meaningless’ – and forays into specificity, the reader is presented with the declaration that Care Boards may reserve certain contracts to non-profit bodies.

The services that can be reserved are not listed conventionally as say ‘Home Care’ but rather in terms of Common Procurement Vocabulary Codes (e.g., 75231200-6). The codes listed cover services include provision of services from the community-based rehabilitation of criminals to home-based domestic help and much else in between. They have to be listed in this way because in our National Care Service (NCS), these are no longer public services to be delivered by a public authority – but rigidly defined functions in a marketplace, that under certain circumstances can, but not should, and certainly not must, but kept away from for profit providers – but not out of a market. Whilst this seems like some sort of step forward it is in reality an attack on public services being publicly provided. It’s designed as a licence for third sector providers to scoop services out of the public sector.

While the codes for functions that can be for reserved providers have commercial grade clarity, the definition of a ‘not-for-profit’ organisation is in many respects woollier than Sean the Sheep. An organisation qualifies if ‘its objective is the pursuit of a public service mission linked to the delivery of services, or its employee-owned, or it reinvests its profits in a participatory fashion’ or ‘will be if and when it performs the contract in question’. It goes almost without saying that the Bill allows Scottish Ministers to change the codes and the definition of qualifying organisation whenever they chose.

There are though one group of not-for-profit organisations that will not qualify. In a participation event explaining the Bill, civil servants explained that the purpose of this clause was to ‘promote the development of the sort of enterprises we don’t have a lot of in Scotland’, so giant function hungry English housing associations like Places for People must be salivating. When asked if local authorities would class as qualifying organisations the answer was straightforward and unequivocal ‘No – they will not’. This power to exclude councils from providing services is neither incidental nor accidental – it is deliberate.

The NHS will also see powers removed and transferred to the NCS. Which powers? Well, there is not any detail about that. It’s for ministers to decide. If they feel it will ‘best reflect the principles of the National Care Service’ they can designate an NHS function as an NCS function and ‘wholly or partly transfer to themselves, or a care board, a function conferred on a health board or a special health board’ (Section 28).

The knock-on effects of this could be considerable. At the moment, the Integrated Joint Boards which are responsible for delivering care – and, of course, include Health Boards – currently have to go to Health Boards, or at least via, the NHS for medical services. Once responsibility for a particular from of medical care becomes an NCS responsibility, there seems no reason that the Care Board will have to go to the NHS for the service. Reinforcing this view is the provision that as well as transferring functions out of the NHS, Ministers can also transfer property (Section 32).

Section 31 of the Bill deals with the transfer of staff from public sector bodies to other employers: ‘Scottish Ministers may by regulations transfer individuals from the employment of the original function holder into the employment of the new function holder’. Protection for NHS staff is illusory. Once a service has transferred to the NCS, and the building has gone, Health Boards will be desperate to get shot of staff they have no use for. They will TUPE the staff – the minister will not need to. This is not an abstract or theoretical issue – Highland Health Board is a lead agency with hundreds of staff doing certain NCS work who transferred from councils.

Simultaneous with the Bill, but separate to it, work is progressing on a sectoral bargaining scheme for social care workers. Desperately needed in any case, it becomes more urgent as thousands of social care staff are removed from current collective bargaining arrangements in local government and the NHS. Whether the arrangements here match up to the existing public sector arrangements remains to be seen. Whatever comes out will need to be able to be applied and enforced against hundreds of employers in the private and voluntary sector.

One urgent task of unions is not to allow sectoral bargaining in the care sector to be used as a battering ram against public provision of services. And, we should recall that TUPE played this role in undermining the political fight against privatisation and outsourcing.

Under these proposals, profits, markets and contract culture will not just remain central to care – but their scope expanded to cover all of social work services too. Local government will be fatally undermined. Market mechanisms and outsourcing were what put the care system into crisis, not Covid. The pandemic merely made it impossible to ignore this for a while. The Scottish Government is determined not to let this crisis go to waste.

Rather though than reflect on its own failings, the Scottish Government has decided to open a new front in their ceaseless war against councils, with NHS outsourcing as a bonus. The NCS Bill when it becomes the NCS Act will not simply impact on the services and workforces involved but all of us. The Bill is an assault against the idea that public services should be publicly provided by public bodies. All of these things should be challenged. This is not a drill.

Stephen Low is a Labour Party member in Glasgow. He is a former member of Labour’s Scottish Executive, part of the Red Paper Collective (https://redpapercollective.net/) and the Campaign for Socialism (http://www.campaignforsocialism.org.uk/) within Scottish Labour.

Towards a set of principles for a National Care Service