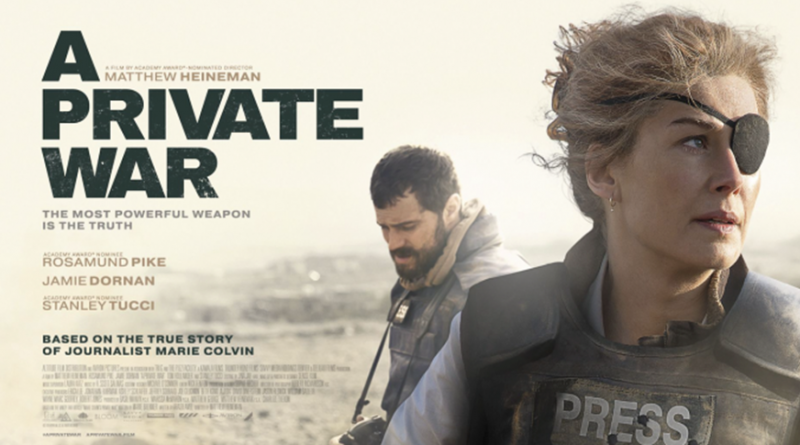 Bridging the period from when war correspondent, Marie Colvin, reported from within Sri Lanka in 2001 until the moment when she was killed in 2012, A Private War begins and ends with real footage from the place where she lost her life: Homs, Syria. Rosamund Pike’s portrayal as Colvin is faultless and fascinating. The actress embodies her forthright instinct for getting to, and speaking, the truth as well as her professional humility and integrity, her capacity for love and glamour and the warm, steady tonality of her voice.

A Private War also throws light onto Colvin’s more vulnerable side. This spanned her need to sometimes drink too much alcohol to numb the post-traumatic-stress which she constantly suffered is divulged and the probability that she considered suicide. The film’s narrative tracks Colvin’s mission to tell and show the tragic suffering of civilian victims of war crimes. Ultimately, and outstandingly, she uncovered the relentless and complete destruction and multiple daily bombings upon Syrian civilians by their own government.

Colvin’s widely publicised confrontational interview with Libyan Colonel, Muammar Gaddafi (Raad Rawi), before her Syrian missions is featured with specific intention. The political relevance of this narrative thread is especially important because it clarifies why she and her journalistic team in Homs were consequently targeted and killed by the Assad regime. Ominous repercussions focus on the fear and grief of her colleagues and editors in London (Tom Hollander as her news editor, Sean Ryan) when they hear and see what they will come to know as her final live broadcast from Syria. Colvin’s credibility was such that when she spoke over tenuous airwaves about ordinary, innocent men, women and children who were not terrorists being indiscriminately bombed and killed, her voice carried weight of truth and power.

The heroine of this story reasoned that she had to ‘… face the many horrors and tell people what really happens when all sides try to obscure the truth’. As a senior correspondent for arguably the most respected of major Fleet Street broadsheet newspapers, Colvin and her team (her photographer, Paul Conroy, played by Jamie Dornan) were hugely admired and revered. By the time of her death in 2012, she had won multiple awards and accolades for her outstanding work. A Private War gives audiences insight into the life of the woman rather than the headlines which made her career. Paul Conroy’s book, Under The Wire, which formed the basis for Chris Martin’s award-winning documentary of the same name, are both strongly recommended as companion pieces to A Private War.