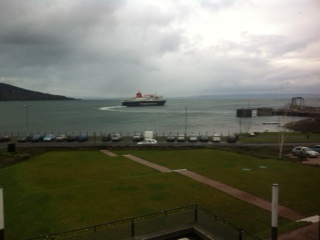 Ahead of the next two years of national elections, it is vital for the left to look at the Scottish Government’s record in areas of transport where powers have been fully devolved for some time. Scottish Ferries is one example where the record since the 2011 Scottish parliament landslide is one of privatising a public service.

Lifeline ferry services are split into two contracts, one for the Northern Isles (north east coast to the Orkney and Shetland Isles) and the larger Clyde and Hebrides network along the west coast. In May 2012, then Transport Minister, Keith Brown, announced that the Northlink ferry services were to be privatised and Serco were to be awarded the 2012-2018 NorthLink contract and would receive over 27% (£53m) more than the public sector operator, CalMac, received for the previous 6 year contract.

And what has been the result for passengers and workers of this privatisation of Scottish ferry services? An instant attack on jobs and pensions, resulting in RMT taking the first industrial action on Northern Isle ferry services for over 30 years. Whilst the jobs could not be saved, the action was successful in persuading Serco to honour seafarers existing pension rights.

For passengers, Serco’s commitment not to raise fares before 2014 soon proved meaningless when a 2.8% increase for travellers between the mainland and the Orkney and Shetlands was announced, along with cuts to services without a whimper from the Scottish Government. Concessionary tickets for school parties and pensioners have also increased in price, along with a thoughtful interior re-design that prevents passengers from sleeping on sofas and charges them for using the toilet.

Private profiteers like Serco who have no record in maritime transport but are seeking to expand into all areas with guaranteed streams of taxpayer and passenger revenue, will currently be preparing their bids for the 27-route Clyde and Hebrides contract, operated at present in the public sector by CalMac.

Successful union pressure, led by the late RMT General Secretary, Bob Crow, persuaded the Scottish Government not to ‘un-bundle’ routes and to delay the re-tendering of this locally and nationally vital network, although it was sure not to concede the point that constantly re-tendering these lifeline public services misinterprets EU law.

CalMac has a realistic chance of winning the Clyde and Hebrides contract from 2016 (yes, shock horror, the public sector can bid!) but the composition of the ‘Expert Ferry Group’ appointed by Keith Brown to advise the Scottish Government on ferries policy is a serious cause for concern. Not only is there no worker representation on this group, long term supporters of ferry privatisation, such as ex-SNP Councillor Roy Pedersen are well represented, along with the Chamber of Shipping.

The Scottish taxpayer has invested nearly £800m since 2000 in new vessels, repairs, maintenance and the ports and harbour infrastructure. New vessels are on order for the Clyde and Hebrides network and the Scottish Government’s Ferries Plan commits to expenditure of around £310m on specific projects to 2025. The private sector has no other motivation beyond profiting from these lifeline services and the decades of public investment in them.

Similarly, CalMac’s record of investing in the next generation of seafarers puts private ferry operators, with illustrious international reputations, to shame. The maritime skills base is under threat after years in which the shipping and financial services industries have enjoyed the bonanza from the Tonnage Tax but refused to recruit UK seafarers in the number required to avoid a deficit in five years’ time. Over 200 ratings and 100 officer cadets have been taken on by CalMac in the last five years, in effect making the Scottish public sector the only operator taking concrete steps to recruit the next generation of seafarers to operate, maintain and service the ferries relied upon by isolated communities all year round.

The recent SNP reshuffle has seen Keith Brown land the Cabinet post for Infrastructure, Investment and Cities, with Derek Mackay, widely regarded to be on the right of the party, replacing him as Transport and Islands Minister. Again, this is not the action of a party convinced of the case for public ownership of lifeline public services in Scotland.

The SNP in Government has privatised every ferry and rail contract that has come up for renewal since 2011 and could be responsible for privatising the entire Scottish ferry network ahead of the 2016 Holyrood elections. Let’s hope that the SNP government can charter a more progressive course and ensure a legacy of sound investment in ferry services and seafarers that remain in the public sector.

Mick Cash is the General Secretary of the National Union of Rail, Maritime and Transport (RMT) Workers