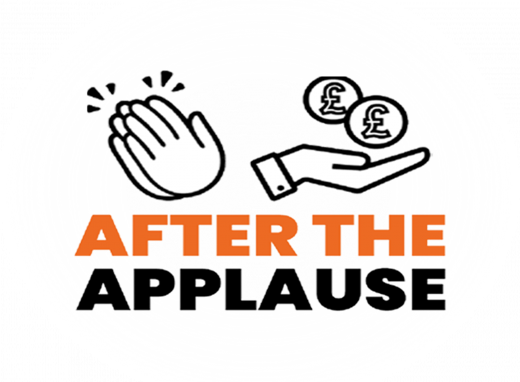 Roz Foyer ask whether the Scottish Government will pass or fail the test of paying up.

Since the first lockdown, we’ve hailed our key workers as heroes. They are. We owe them a great amount of gratitude. While many of us were tucked up at home, working online, the workers in our food shops and factories, on post and deliveries, in our hospitals, our care homes, our schools, local authorities, and all those providing essential services, put themselves at risk to look after us. Yet while hailed as heroes, they are not paid like heroes. Key workers are paid 8% less on average than others. A third are paid less than £10 an hour. While they continue to look after us, it is now time we look after them. Ultimately, claps and images of rainbows do not pay the bills.

The Scottish Government’s forthcoming Budget is a crucial test of whether it’s prepared to put its money where its mouth is and properly value our key workers. Half of Scotland’s key workers are employed in the public sector, and many key workers in the private sector depend on public sector funding or support. The Scottish Government has rightly distanced itself from the Westminster Spending Review, with Cabinet Secretary for Finance, Kate Forbes MSP, pledging ‘there will be no Tory pay freeze in Scotland’. For all his smooth words, Sunak’s Spending Review is a kick in the teeth for key workers. Far from ‘levelling up’, his attacks on public sector pay are about levelling down. And yet, the Scottish Government’s key policy announcement to date, of a £500 bonus to health and care workers, deserves further scrutiny.

While it represents a welcome show of appreciation for NHS and adult-care workers, it excludes many public sector workers who we have all relied upon as Covid has hit. What about the teachers and school staff that have risked their health to ensure our children are educated? And, the cleaners and cooks in our schools and care homes? And, the refuse collectors in our streets and backcourts? And, the civil servants processing benefits to increasing numbers of people across Scotland? And, the firefighters reporting for duty throughout the pandemic? The list could go on.

The payment is also pro-rata and, as a high proportion of the covered workers work part-time, they won’t see anywhere near the £500. Because it is a bonus, it won’t be consolidated into future pay levels or even be pensionable. The Scottish Government should extend its £500 bonus to all public sector key workers who have worked to keep people safe during the pandemic.

Longer term though, a cash bonus does not address the structural issues in the public sector where inequality of pay, low wages and the undervaluing of key skilled roles dominate in so many areas. Over the last decade, public sector workers have seen the value of their real pay fall from consecutive below inflation pay increases. The result has not only been declining levels of pay, but poorer communities. Workers deserve a real pay rise to put money in their pockets now, and in their pensions in the future.

A significant pay rise for poorly paid public sector workers would boost local economies. Well-paid bankers and executives would put their extra money into their offshore accounts. If you put money in the pockets of health workers, carers, and cleaners, they will spend it on basic goods and services in their local area. If ever there was a policy for ‘inclusive growth’, this is it. What’s more, while the Government would pay out more in wages, much of this would be recycled back in the form of tax revenue. Research by the Institute of Public Policy Research suggests more than 40% of the cost of Scottish public sector pay increases would be offset in tax revenue to the Scottish and UK Governments.

A public sector pay increase would also serve as a shock-absorber for many low-income families. Half of key workers with children have a partner who is in non-key work. Many will be on furlough pay of 80% or face an uncertain future. Boosting the pay of keyworkers can help low-income families deal with the wider economic impacts of coronavirus.

Increasing public sector pay would also narrow the gender pay gap. Women are twice as likely than men to be key workers, making up 82% of care workers and home carers, 77% of cleaners, 96% of nursery nurses and assistants, 92% of childminders, 89% of educational support assistants, and the majority of jobs in Government administration.

Of course, the Scottish Budget must do more than simply increase public sector pay. We need an economic stimulus package to support workers in struggling sectors and huge investment in a worker-led just transition that tackles climate change while creating good quality green jobs in Scotland. And at a UK level, we need further investment, tax reform, corporate governance reform, and an increase in the minimum wage worth more than 18p.
.
But public sector pay is the litmus test of whether the Scottish Government is willing to properly value those key workers that kept people safe while politicians clapped from their doorsteps. Let’s not pretend there is a lack of money. British billionaires have profited through the pandemic to the tune of £25bn. That is enough to fund a decent pay rise for every public worker in the UK. It is time for politicians to value our key workers in deeds, not just words. The Scottish Government Budget must be the start of that process and fund a proper pay increase for our public sector workers.

NHS wholly-owned subsidiaries – difference of approach between Scotland and England