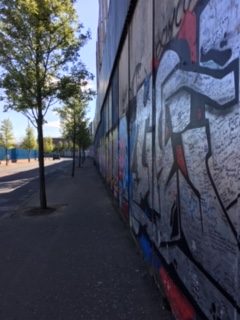 The seemingly never-ending saga of Brexit appears to be entering the crunch stage, as the October 31 deadline for exiting approaches. In Ireland, people are continually shocked at the arrogance, incompetence and ignorance shown by a Tory party intent on forcing through a ‘no-deal’ Brexit, without even the faintest of concern for the wishes of the majority of people North or South of the island. Previously, Boris has compared the border in Ireland to travelling between Camden and Westminster and paying the congestion charge. Northern Ireland is ‘as British as Finchley’ as his hero, Margaret Thatcher, would have put it.

No amount of Tory guff, however, can disguise the realities of the border in Ireland and the difficulties it poses for people who live in its vicinity. Boris and the Tories would be foolish to dismiss these concerns. Previous incarnations of the British ruling class have paid a significant price for doing so.

One does not require a degree in history to realise the border in Ireland cannot be compared to congestion systems in England. It is a deeply political edifice, and one that has been the source of much strife in the island in the last century. It was, after all, imposed on the majority of the Irish people by a counter-revolution, instigated by the British Empire. It was designed to produce a ‘carnival of reaction’, and to blunt the impact of progressive politics in Ireland.

In the North, people who live in Derry and work in Donegal and vice-versa have a genuine fear that the British government could ignore their fear of having to cross a border with checkpoints on it. The Irish National Teachers Organisation (INTO) have raised concerns about this and how teachers could be affected including being forced to carry out more training and longer travel times to get to work.

Not only is it correct to oppose any strengthening of the border because it would be a massive inconvenience to working class people. But at a time when a new and developing debate about a united Ireland is opening up, it would be also self-defeating for those who want to see the dismantling of the borer to tie ourselves to any project that would see its strengthening. No socialist in Ireland, therefore, should contemplate supporting a ‘no-deal’ Brexit.

Currently, there is a stand-off between London and Brussels over the issue of the ‘backstop’. This backstop is designed as a ‘last resort’ measure (in the event of a ‘no deal’ Brexit), to ensure that an arrangement is kept in place to that would mean the North and South of Ireland operates the same trade and customs policy and no hard border is erected.

The Democratic Unionist Party (DUP) see this as another attempt at sneaking a United Ireland through the backdoor, creating a potentially different customs and trade arrangement between Northern Ireland and the rest of Britain, undermining the Brexit they championed and, thus, they oppose the backstop. The Tories are heavily reliant on the DUP to maintain their coalition of carnage. The DUP say they do not want any divergence between Northern Ireland and other parts of Britain. Except, of course, for abortion law and equal marriage, where they have maintained and celebrated divergence for years.

So far, the people in Ireland have been at best an afterthought in the minds of the British government and its negotiating teams. Stopping Jeremy Corbyn entering Number 10, whilst appeasing the little Englanders in the Brexit party, seems to drive their motivation more than the upheaval that could be caused to the lives of people in Ireland. This flagrant indifference to the plight of people here has at times made the EU look like a progressive and sensible friend of Ireland. But it is just as plausible that a ‘hard’ border could be enforced by Brussels, as it is that it would come from London.

Indeed, EU bureaucrats have stated that they would insist on a border and custom controls in the event of a ‘no deal’ Brexit, in order to protect the ‘integrity’ of the single market. And. it appears as though they have a willing accomplice in the Irish government. Leo Varadkar, the Irish Taoiseach, has already employed thousands of extra customs officials, police and armed support units to be on standby. The Taoiseach has so far failed to rule out a ‘hard’ border or said anything about using Ireland’s veto to block any deal which tries to beef up the border in Ireland.

The EU’s main concern is not for peace in Ireland or harmony between North and South but the supremacy of its markets. The Irish government should boldly state that it will not abide by any requests from the EU for border posts, custom checks or tariffs between North and South in the event of a ‘no-deal’ Brexit. The economic interest of elites in Brussels cannot be used to create upheaval in Ireland.

People Before Profit stands with neither London nor Brussels in this ongoing fight between a declining British empire and a burgeoning European empire. We oppose all attempts to restrict people’s right to move freely across this island. We advocate a people power form of civil disobedience to make these measures unworkable if the elites try to install them against the wishes of the vast majority here.

A ‘no deal’ Brexit will be disastrous for Ireland, with talks of widescale job losses, food and medicine shortages. We cannot allow the Tories or the EU to pass the buck onto ordinary, and must resist all efforts by the ruling elites to use this crisis to create a new carnival of reaction in the twenty-first century.

Photograph of A Peace Wall in Belfast

Demos Kratia – it is all Greek to us for people power?