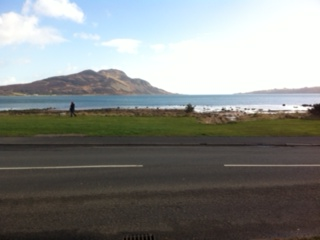 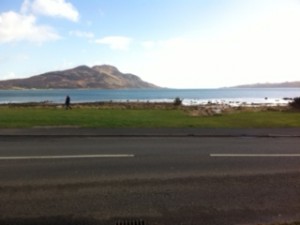 Calls for a big green infrastructure programme will feature strongly in Scottish Environment LINK’s manifesto for 2016. Combined with a focused approach to securing all the potential social and economic benefits from such investment, this is something to which the labour movement should give wholehearted support. It sits comfortably with the STUC’s ‘Agenda for Collective Prosperity’. And, if there is a flowering of enthusiasm and popular support, it can be a game-changer in Scottish politics.

Within the environmental movement, such a push is being driven by the failure to meet the targets in Scotland’s Climate Change Act, with the Scottish Government’s plans for meeting those targets regarded by Stop Climate Change Scotland as insufficient. In particular, de-carbonisation of the transport system is a weakness and this is compounded by the absence from the budget of any substantial transport investments which will reduce carbon emissions.

Even where appropriate measures are more clearly set out in this plan, there is a large investment gap between what is required to shift our economy rapidly towards low greenhouse gas emissions and investment by public and private sectors. It doesn’t seem there is a concerted approach by the Scottish Government to fill this gap.

What’s needed, therefore, is a green ‘new deal’ programme – large-scale, public-led investment in transforming our economy which should generate new, well-paid productive jobs and reduce fuel poverty. We need to operationalise in Scotland the concept of a ‘just transition’ to a low-carbon economy.

Broadly speaking we do know how to do this. The technology already exists, as illustrated by Zero Carbon Britain, the ‘One Million Climate Jobs’ campaign and, indeed, the World Bank. In terms of raising the finance, one of the most inspiring suggestions is Green Infrastructure Quantitative Easing (GIQE) – deploying the powers to create money which saved the banks towards instead saving our environment. However, even without this the British government could and should borrow the funds needed, though doing so would require abandoning its ideological commitment to austerity.

There’s another major driver which is reviving interest in ‘just transition’, especially in the labour movement, namely, job losses in fossil fuel industries. Most starkly, closing Longannett’s coal-fired power station and the lay-offs in the North Sea, both of which are devastating for the workers and communities affected. An industrial strategy is needed to replace these jobs and it should be a green industrial strategy in which new employment opportunities are created to provide jobs for those moving out of the old industries. In particular, efforts should be made to bring new work to communities which have suffered the worst consequences of industrial decline, like the coalfields.

If we need evidence that how you make this transition matters, we only have to look at the tragically poor record in Scotland and Britain of job creation from on-shore wind. It’s not that there are no new jobs – just that most of the high-quality engineering and manufacturing jobs are in other countries where the factories of Siemens, Vestas, Alstom etc are situated. Wave and tidal should be next but the failure of the two big Scottish wave energy companies indicates that we haven’t yet learnt how to correct the mistakes of the past.

The conclusion is that to ensure just transition requires a change in the state’s approach to management of the economy and to economic development, national and local; and to ownership – and to financing the transition as well.

In 2009, the STUC and Scottish Government signed a communiqué which stated ‘the transition to a sustainable economy needs to be socially just so that all parts of society partake in the benefits of growth and responsibilities are shared fairly’ but it is not clear what fruit this has borne. Now is the time to come together to make this happen in Scotland. Pushing for a just transition and a seriously large green infrastructure programme can transform Scotland’s economy. We know what needs doing. What’s stopping us?

Matthew Crighton is active within Friends of the Earth, Edinburgh World Justice Festival and Scottish Venezuela Solidarity Campaign. He is currently freelancing and was an officer of City of Edinburgh UNISON.