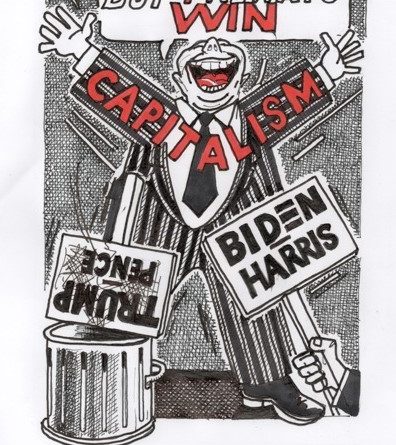 Dan La Botz says Biden’s victory is a positive development but Trumpism remains a force and Biden is no progressive.

Democrat Joe Biden defeated Republican Donald Trump by a popular vote of 81.2m to 74.2m, winning the Electoral College vote by 306 to 232, leading to dancing in the streets in some parts of the United States. Still Trump claims victory and many Republican legislators have until now continued to support him. Seventy-five percent of Republicans believe Trump won the election and that Biden will be an illegitimate president.

While Trump has been defeated, Trumpism—an authoritarian, racist and sexist, and reactionary ideology—remains a powerful force, with something like 40% of the voters remaining not only loyal to him but imbued with his values. These millions of people—wealthy, middleclass, working class, and poor—largely located in rural and ex-urban areas in the Midwest and South represent a breeding ground for even more reactionary white nationalist and neo-fascist groups. The continued existence of this now highly politicized population represents one of the biggest challenges for the future. And, despite the stresses caused by Trump, the Republican Party, now more reactionary than before, remains powerful.

While Biden won the presidential election, the Democrats lost nine seats in the House of Representatives, weakening their majority in the lower house. The control of the Senate will be decided on January 5 by two runoff elections in the state of Georgia, and, if the Democrats lose one of those, Biden will face great difficulty in advancing his legislative agenda.

Biden embodies, in his long history in the Senate and as Obama’s vice-president, the Democratic Party establishment with its ties to finance, industrial corporations, the media and the military. He is committed to the capitalist system and to U.S. imperial interests abroad. Biden’s principal goal will be to re-establish the policies of the Obama presidency and the neoliberal economic order that began in the 1980s and prospered—for the capitalist class—until the crisis of 2008. His cabinet appointments, about half of them from the Obama administration, and his plans to re-establish international ties—the Paris Climate Agreement, the Iran Nuclear deal, the World Health Organization, the UN Human Rights Council—and strengthen existing alliances like NATO, make his objectives clear. As he said, ‘We are back and ready to lead.’ Biden must deal with problems like Iran and North Korea, but his great foreign policy challenge will be China, which has become an economic competitor with the United States, while Russia will continue to be a disrupter of the US-dominated world order that Biden desires.

While the self-proclaimed ‘democratic socialist’ Bernie Sanders lost his bid for the Democratic Party nomination, American progressives and socialists did not do badly in the election, though they still remain a minor force in U.S. politics. Still the progressives, many of whom are members of the Democratic Socialists of America (DSA), retained their positions in the House of Representatives and gained others in state senate and house elections, as well as in city councils. All four members of ‘the squad’ of progressives—Ihan Omar of Minnesota, Alexandria Ocasio-Cortez of New York, Rashida Tlaib of Michigan and Ayanna Pressley of Massachusetts—won re-election. DSA now has five members in the US House (out of 435), as well as seven members in state senate seats and 30 in state lower houses. In Chicago, DSA has six of 50 city council members. But Biden’s Democratic majority claims that the Left’s talk of ‘socialism’ and ‘defunding the police’ caused the party’s losses in the House.

While Biden may wish to go back to the past, the depth of the American crisis of coronavirus, economic depression might force him to take more progressive positions than he has in the past—but don’t count on it. While the Biden administration promises to be more sympathetic to working class issues of the unions, immigrants, communities of colour, and women, neither Biden nor the Democrats have done much for these groups in fort years. All of them will have to organize and fight if they are to make progress under Biden, and in many states they will continue to face Republican governments and the forces of Trumpism. Unions—representing only 10 percent of American worker—remain weak and strikes had virtually disappeared in the last forty years, though in the last two years there has been increasing number of them. Women teachers and nurses have represented the majority in recent strikes and protests. And last spring and summer some 20m people or all racial groups joined protests against police racism and violence. So, the potential for a fight is there. DSA will be campaigning for Medicare for all and working to reach 100,000 members.

Dan La Botz is a Brooklyn-based writer and a member of both Solidarity and the Democratic Socialists of America. His latest book, and first novel, is ‘Trotsky in Tijuana’ (trotskyintijuana.com).

From Scotland to Gaza with much love, favour and affection