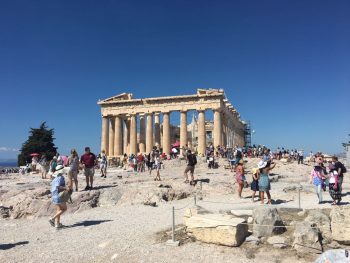 In the decade since the banking crisis, tens of millions of people in Greece, Ireland, Spain, Italy, Portugal and beyond have suffered inestimable hardship having been reduced by austerity and deepening indebtedness. This book by the Irish communist academic and activist, Helena Sheehan, examines the meteoric rise and catastrophic collapse of the one radical left party that had a chance to change all that.

I was in Athens on Burns Night 2015, at the invitation of SYRIZA [The Coalition of the Radical Left], to witness their astonishing General Election victory first hand. Standing alongside thousands of other supporters I cheered the election of Europe’s most left wing Government since the 1930s. On that joyous late January evening, I remember seeing veteran Greek militants, who had struggled against the Nazi occupation in WW2 and against the military junta of the 1960s, weep openly as the realisation of their dreams dawned on them. They had finally prevailed, and on a profoundly anti-capitalist manifesto that promised to confront those responsible for plunging Greece into economic and social collapse. It was heady stuff.

In Glasgow, a month earlier, I had met Stelios Papas a veteran Greek communist [and father of Syriza Government Minister Nico Papas]. Stelios spent half the year with his Scottish family and the other half heading SYRIZA’s International Department in Athens. SYRIZA, he told me, was a fusion of the old left and the new. Here was a united left party with a proud socialist hinterland elected to challenge 21st century capitalism. Their programme, or ‘Thessaloniki Declaration’, set out to revoke the punishing terms of the ‘Memoranda’ agreed by previous Greek Governments. They would restore jobs, pensions, the national minimum wage and essential public services to previous levels, root out state corruption and compel rich oligarchs to pay taxes and end their evasion. SYRIZA carried the hopes of a nation and beyond. Their victory represented an exceptional success for socialists worldwide.

And yet, as Helena Sheehan explains, all those hopes were dashed within weeks. SYRIZA failed as spectacularly as it had risen. She recalls Alexis Tsipras’s boast in Dublin in 2014 that ‘We are not Ireland. We will resist.’ He didn’t. Events were to show he grievously underestimated his enemies. Political expectations were high in January 2015 even though Greece’s economy was in ruins. The country was bankrupt and threatened to bring down the entire Eurozone. It had the second biggest per capita debt in the world. Incapable of paying it back, successive Greek Governments had taken out further loans [on ever more punitive terms] simply to pay back the interest on earlier ones. Youth unemployment stood at 70%. Evictions and homelessness put beggars onto the streets alongside rioters and looters. Ten per cent of the population emigrated. Suicide rates soared. And the sense of a society unravelling engulfed the nation.

Into this maelstrom stepped SYRIZA whose rise was as much to do with the collapse of the traditional left party, PASOK, as Tsipras’s ability to build a coalition of leftists or present a programme capable of capturing the imagination of desperate people. Their politics were high on populist rhetoric, as Helena Sheehan’s book amply records, but utterly inadequate in combating the plans of the ‘Troika’ (ECB/ IMF/EU). If principled socialists in government live by George Lansbury’s famous maxim, ‘Better to break the law than break the poor’. SYRIZA didn’t! It dutifully swallowed all the ‘medicine’ the Troika prescribed for them and then forced it into the mouths of the Greek people. Urged by the party’s Left Platform to leave the Euro and introduce its own currency SYRIZA’s leaders argued that a country which imported 80% of its foodstuffs and raw materials could not use a currency no one wanted or expect to be offered essential credit lines. In this they were probably right.

Their fight against the Troika was however what boxing aficionados might call ‘a mismatch’. The power imbalance was plainly insurmountable. And, there was a certain inevitability about Tsipras throwing in the towel! Sheehan accuses SYRIZA of having developed no Plan B i.e. leaving the Euro and its debts. In truth, they had no Plan A! What they did was implement cuts and privatisation programmes worse than PASOK or New Democracy ever did.

The referendum of September 2015 was the final straw. That lunatic adventure killed off any remnants of credibility SYRIZA may have retained. Defaulting on a $1.8bn loan repayment to creditors, Tsipras called a snap referendum over the terms of the Memoranda and won a resounding NO [‘OXI’] vote. But by now at a political dead end, he turned around and agreed terms inferior to those offered to him just two days earlier! Such was the ridicule that greeted his decision the Harvard Law School awarded him their 2015 prize for the worst negotiating performance of the year. One disgusted SYRIZA MP went further telling Parliament: ‘We are now engaged in a brutal class war – with our own leaders’. Thousands of SYRIZA members, who had been euphoric in January, followed his lead and resigned from the party in anger and disgust.

Recording this modern Greek tragedy in all its glory Helena Sheehan unhappily concedes: ‘SYRIZA is no longer a laboratory for hope for the left but a cause for despair’. Few would disagree. Today SYRIZA is a byword for shame on the Left. No one mentions them with pride. Nevertheless, this episode is rich in lessons about where power lies today in the world and what is involved in confronting it. Every socialist should study them carefully.

Colin Fox is national spokesman of the Scottish Socialist Party