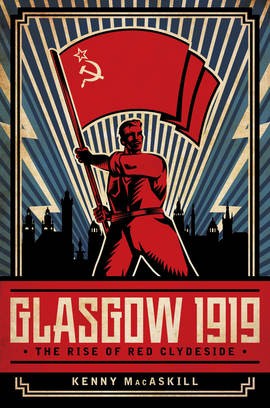 Much has been written and remembered about events in Glasgow’s George Square in 1919 when civilians battled police. Troops and tanks appeared on the streets of the city and remained there for a week. It has become the defining event of a period known as ‘Red Clydeside’, an era that continues to inspire Scotland’s labour movement, and this new book is a welcome addition to our knowledge of the political radicalism that lay behind it.

The author, Kenny MacAskill, former SNP member of the Scottish Parliament and former Cabinet Secretary for Justice, looks for the roots of Red Clydeside and finds some of them in the way the French Revolution influenced political reformers like Thomas Muir in the late eighteenth century.

A century later, Keir Hardie was standing for election as an independent Labour candidate and the Scottish Labour Party was formed. Trade unionism and strikes exploded in the first decade of the twentieth century but resisting war fever after the outbreak of World War 1 in 1914 was a challenge for the Left.

Industrial struggles for better wages for engineering workers started on the Clyde in 1915. Any increase in militancy was feared by the ruling class and legislation was introduced by minister for armaments, Lloyd George, cracked down on dissent.

In 1916, the Clyde Workers Committee (CWC) was formed, its chairman was Willie Gallacher, and the lull in militancy was lifted a little with news of the February and then October revolutions in Russia. The all-too-familiar divide between reformists and radicals began to take shape.

Well-paced chapters in Glasgow 1919 cover the fast-moving events of these years and there is a good analysis of the 1919 general election.

Events gathered steam in 1919 with plans for a Clydeside-wide strike demanding a forty-hour working week. Coordination for an alliance with miners, rail and transport workers was not successful but this not deter those who gathered in George Square on 29 January and hoisted a red flag on the municipal flagpole.

Trade union leaders tried to rein in the growing militancy of workers and the CWC. The Cabinet met for the same reason and military intervention was discussed.

The author estimates that between 20,000 and 40,000 people were in George Square on Friday 31 January when a fracas developed after an argument between a striker and a soldier on a tram. The police later claimed that they came under attack but MacAskill’s considered opinion is that this was a fabrication. What is not disputed is the fact that the police baton-charged the crowd and set off a running battle on what became known as ‘Bloody Friday’.

The book provides a graphic account of what took place that day: the reading of the Riot Act, the battle extending into streets outside the square, troops from outside the area and tanks entering Glasgow that night.

Gallacher, in his autobiography, claims that a revolutionary situation had developed in Glasgow and that an opportunity to seriously challenge the state had been lost. MacAskill considers this claim and concludes that it is ‘highly debatable’ which, given his tendency to use diplomatic language around contentious issues, probably means a downright negative. Gallacher, though, has a point when saying the failure of strikers to make their way to the Glasgow barracks – where soldiers recruited from the city were strictly confined to quarters – was something to regret. The authorities must have perceived a potential danger if strikers entered into dialogue with soldiers from the Glasgow area.

After ‘Bloody Friday’, the wider social base that had helped paint Clydeside red was to be contained within a narrow field of electoral politics and the Labour Party gradually gained ascendancy.

This book deserves praise for bringing together details of events in 1919 and placing them in a wider context of working class militancy. The lack of an index and reference notes are its only drawbacks.