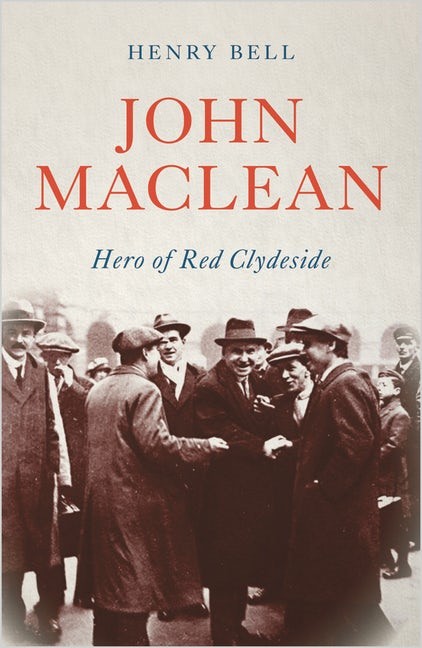 The explosion of working-class revolt during WWI produced one of Britain’s finest revolutionaries. John Maclean was one and he broke from the leaders of his own party to become the most consistent opponent of British imperialism, becoming the most prominent figure in the anti-war movement. Working independently, in virtual isolation, he made a series of impressive breakthroughs echoing those of Lenin and the Bolsheviks. Like Lenin but unlike most of the socialist left, he defended the 1916 Dublin Easter Rising.

Drawing on earlier sources and more recent material, Henry Bell’s engaging biography explains all this clearly to a new audience, showing the lengths which the British state went to counter Maclean. The account is compelling and timely. It captures the essence of Maclean, portraying him as a towering, creative figure from a momentous period in our history – an enduring figure that can speak to us today.

Maclean was a fierce opponent of British imperialism who led the opposition to the First World War. He was involved with the Clyde Workers’ Committee (CWC), which spearheaded the rank and file revolt against the dismantling of union defences during wartime.

It is doubtful that its leaders would have taken such a lead had it not been for Maclean’s efforts to show how the war served only imperialist interests and should be opposed by the workers. He held regular anti-war meetings at the factory gates and outside army recruitment offices.

He campaigned against spiralling wartime food prices. Alongside women like Mary Barbour, Helen Crawfurd and Agnes Dollan, he connected the great Glasgow rent strike of 1915 to the power of the Clyde munitions workers and in so doing helped lead it to a stunning victory.

His importance was recognised by both the British and Russian governments, if for opposite reasons. Lloyd George’s war cabinet saw him as a dangerous revolutionary and imprisoned him repeatedly. Twice he was condemned to lengthy terms of penal servitude for sedition and on both occasions he was released early, thanks to mass agitation in Scotland and around the world. In Russia, the new revolutionary workers’ government elected him their honorary president and appointed him Soviet consul in Glasgow.

In May 1918, Maclean had been sentenced to five years in Peterhead. But six months later in November the German Revolution toppled the Kaiser and ended the war. Maclean was immediately released and Bell explains why:

‘A snap General Election was called for December and the Scotland Office feared that if Maclean defeated Labour Minister George Barnes in the Gorbals and was then unable to serve due to imprisonment, they might face increased unrest on the Clyde. … The Home Secretary noted Maclean had the support of revolutionaries in Wales and London who would see his release as a triumph over the government. And the Scotland Office noted that ‘if Bolshevik propaganda is put out in this country Maclean will be the leader’. Nevertheless, the government decided that releasing Maclean was still the wisest course of action to defuse the growing protests.’

Maclean returned to Glasgow a hero and the newspapers estimated 100,000 lined the streets to greet him, including many who had struck work. This was the event that later inspired Hamish Henderson to write his John Maclean March.

When, encouraged by Lenin and the new Third International, the Communist Party of Great Britain (CPGB) was belatedly formed in 1920-21, Maclean refused to join because he had major political differences with those who would lead it and this brings me to my only criticism of an otherwise excellent book.

Henry Bell agrees with Maclean’s refusal to join the CPGB. In doing so he confuses the new party of 1920 and the Third International to which it belonged, with the deformed caricatures they’d both later become after Lenin’s death and Stalin’s ascendancy. Stalinism was not the heir of Bolshevism; it was its nemesis, the gravedigger of the Russian Revolution.

It was a mistake on Maclean’s part. He was head and shoulders above those he criticised – those who later, in his absence, became the leaders of the CPGB. But tragically his refusal to join cut him off from the most class-conscious workers. It was the one organisation, which despite its undoubted weaknesses, tried to face up to the task of rebuilding the working-class movement in the teeth of a vicious employers’ offensive.

Maclean’s absence isolated him from the movement and deprived the new revolutionary party of the most talented and courageous socialist in Britain. He was still highly regarded among the Scottish working class, as was shown by the thousands who lined the streets for his funeral in 1923. But sadly, his Scottish Workers’ Republican Party, founded towards the end of his life, numbered its membership in the dozens and its electoral support in mere hundreds.

But this weakness cannot diminish Maclean’s immense significance for socialists today; nor does it deter me from recommending this book. In his final chapter, the author argues convincingly:

It is hard to imagine Maclean would see the idea of a Scotland, independent but still under capitalism, as any kind of ideal. He would, however, still see the break–up of Britain as a blow against capitalism and imperialism. Were Maclean to take part in the campaign for independence today it seems likely he would do so by fighting the housing crisis, unemployment and rising fascism – just as he did in the 1920s.