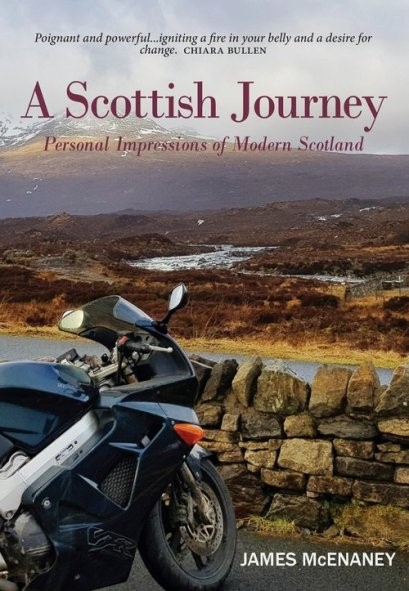 A lot has been written about the democratic foment of the Scottish independence referendum of 2014. This is not a book about that momentous period in our history. But it is firmly located in the Scotland created during the referendum. And that is why it is so important. James McEnaney’s book cannot be read without reference to the book from which it draws much inspiration, Edwin Muir’s Scottish Journey, published in 1935. In Scottish Journey, Muir recounts his journey around Scotland by the relatively new-fangled mode of the motor car. The ability for an individual to travel from place to place relatively easily was at the heart of Muir’s excellent book. It was new, and so it was interesting. Muir’s observational flair makes his book a pleasure – and one I would thoroughly recommend. McEnaney’s is also well worth the read. It is well written and insightful, and the use of a motorbike to make the journey gives it the same displacement as Muir’s 1930s readers must have experienced.

Muir’s experience was that of many in the early twentieth century: failure of the family farm prompted a move to the city, in his case, Glasgow. A series of family deaths left Muir with the sense that industrial Scotland was a form of hell. His journey is in search of a sense of what Scotland is in the 1930s. It was at this time that the ingredients for the social democratic state of les trente glorieuses from 1945 to the mid-1970s were coming together.

What makes McEnaney’s book a significant work is that it comes at a time of great transition. The remaining crisis-hit vestiges of the world Muir witnessed coming into being are under threat. The motor car, and its associated technologies, dominated the mid-twentieth century. They made travel easier, depleted the distinctiveness of place, compressed space and facilitated the creation of mass public services. Those mass public services are now the source of deep political contestation: on one side, advocates of universal services – the Scottish Radical Independence Campaign, Democratic Socialists in the US, the Corbyn movement; on the other, those who want to reverse the progress of the twentieth century – the right Brexiters, Trump and demagogues like Brazil’s President Bolsonaro.

The 2014 referendum exposed a fault line in progressive thought – one that has resonance well beyond Scotland. The dominant mode of twentieth-century thought in Britain was that centralisation was a requirement of solidarity. This was often right for its time. The National Health Service is the crowning glory of this approach to politics. There is, though, another way. During the referendum, a great deal of attention was paid to Nordic models of social democracy. Where Scotland has the largest ‘local’ authorities in Europe, the Nordic countries have some of the smallest. As McEnaney points out Lesley Riddoch’s Blossom gives a thorough overview of the contrasting approaches to democracy.

And, this is significant because it seems that the Nordic model has taken the best of British social democracy and turned it into a model that is both more effective and more durable. Time after time at referendum debates, Labour politicians would point to the importance of maintaining the union to ‘show solidarity with workers in Newcastle, Liverpool and Manchester’. That is an argument of the twentieth century, and one that no longer resonates. And it does not resonate because of a decline in the idea that solidarity requires centralisation or, more specifically, requires bounding and containing by the notion of the state.

I, like many radicals, see my solidarity unconstrained by the borders of a state. For me, solidarity stretches well beyond the industrial cities of the north of England, to Kurdistan, to Palestine, to Venezuela, to Yemen and around the world. But that solidarity is no substitute for an actual lived engagement with those around us. Saying we must share a government to share solidarity is an argument that misunderstands not only what solidarity actually is, but also what government – and by extension, democracy – should be.

In A Scottish Journey, McEnaney does what nowhere near enough of our politicians do: he travels, stays with people he does not know, and talks to them about the issues that matter to them. Repeatedly those issues are about a lack of local control, a failure to understand the difference of place and a distance from power. It is this malaise that I believe is at the heart of our current political and economic crisis.

Possibly the most interesting development in the Scottish referendum campaign, and the one that unleashed a social movement unseen in the preceding 25 years, is the reclaiming of place. Along with this reclaiming of place comes the desire to redistribute power to those places; to free them from the shackles of ‘remote and ignorant government’, as Norman McCaig once described Westminster. McEnaney’s book speaks of the alienation and remoteness that the people he encountered on his journey feel.

But his journey does not end there: ‘Despite the inequality, alienation and frustration apparent all over the country there is also a sense of momentum, a feeling that change is coming … Even amidst a battleground of entrenched political division, Scotland, against all the odds, feels ready to build a future’.

Maggie Chapman is a co-convener of the Scottish Green Party.