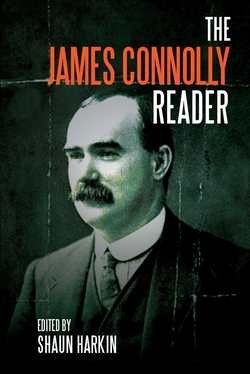 Born to Irish immigrants in an Edinburgh slum, Connolly was driven into the army through poverty at fourteen, being sent to serve in Ireland. When he learned his regiment was being transferred to India, he deserted and returned to Scotland, becoming a socialist activist in Dundee. Moving to Dublin in 1896, he launched the Irish Socialist Republican Party and pioneered Marxist ideas in Irish conditions. Poverty forced him to immigrate to the USA where he played a key role organising in the labour movement. Returning to Ireland in 1910, Connolly was a key figure in the new Irish Transport & General Workers’ Union, helping lead the fight back in the Dublin Lockout of 1913. Wounded and taken prisoner in Dublin during Easter 1916, he was summarily executed by a British firing squad for his leading role in the Irish Rebellion.

Harkin shows Connolly as an original thinker and creative Marxist. His grasp of the relationship between national liberation, anti-imperialism and socialism, along with his understanding of the need for women’s liberation, were way ahead of their time. Connolly was true to his own maxim: ‘the only true prophets are those who shape the future’.

His major theoretical work, Labour in Irish History, is included in its entirety. Echoing Trotsky’s theory of permanent revolution, it argues ‘the fight for national liberty of any subject nation must, perforce, keep pace with the progress of the struggle for liberty of the most subject class in that nation’; that middle class nationalists in Ireland, ‘have a thousand economic strings … binding them to English capitalism’.

In a polemic that speaks to the situation in Scotland today as much as it did Ireland in 1897, Connolly warned: ‘If you remove the English army tomorrow and hoist the green flag over Dublin Castle, unless you set about the organisation of the Socialist Republic your efforts would be in vain. England would still rule you through her capitalists, her landlords, her financiers and the whole array of commercial institutions she has planted in this country’.

His undying commitment to Marxism was distorted after 1921 by Ireland’s new rulers: he was idolised as a nationalist martyr for Irish freedom, with train stations, hospitals and schools named after him. Harkin writes, ‘to depict Connolly as merely a militant Irish nationalist, his lifelong involvement in the international socialist movement had to be down played. The notion he abandoned his commitment to socialism and sacrificed himself for the ‘cause of Ireland’ was widely popularised … Yet an understanding of Connolly’s Marxism is essential to appreciate his political outlook and strategy right through to the 1916 rebellion’.

As a union organiser in Belfast prior to the WW1, Connolly fought the scourge of sectarianism: ‘The Irish Catholic was despoiled by force. The Irish protestant was despoiled by fraud. The spoliation of both continues today under more insidious but more effective forms, and the only hope lies in the latter combining with the former in overthrowing their common spoilers and consenting to live in amity together’.

The defeat in the 1913 Dublin lockout was followed by the threat of partition and the outbreak of war; these setbacks shaped Connolly’s final years. He could see the partition of Ireland – now agreed by the Tory Unionist establishment and the businessmen and landowners who led both the Unionist and Irish Home Rule parties – would mean ‘a carnival of reaction north and south’, securing the rule of both orange and green capital both sides of any border.

Connolly knew the carnage of 1914 was the outcome of a system based on competition for profits and empire but he believed the European socialist parties – the Socialist International – would live up to its pre-war resolutions and oppose the war. He even hoped the socialist movement would use its outbreak to foment general strikes in the belligerent nations and topple the system.

To his horror the socialist leaders of Germany, Britain and France lined up behind their rulers, swopping the language of socialism for national chauvinism. Yet Connolly remained steadfast; the only solution to war was revolution: ‘The signal for war should have been the signal of rebellion’. His anger and impatience propelled him towards the Easter Rising in 1916, hoping it would not only break British rule but that it would ‘set the torch to a European conflagration that will not burn out till the last throne and the last capitalist debenture will be shrivelled in the funeral pyre of the last warlord’.

In hindsight, its preparation and timing are open to criticism but Lenin wrote in defence of the insurgents – rejecting the view of some on the left that it was a military adventure. Within two years things had changed dramatically. Starting in Russia less than a year after the failed Dublin rising, a revolutionary wave would sweep Europe, toppling empires and dynasties and ending the slaughter. By early 1919 revolution had spread to Ireland itself.

This book is invaluable for anyone keen to learn from Connolly’s writings. Placed in context by the author’s concise and balanced introduction, he links them to Connolly’s tremendous political contribution as a union organiser, revolutionary socialist and anti-imperialist. A long time ago, Isaac Newton said, ‘the reason we can see much further is because we are standing on the shoulders of a giant’. As Harkin shows, while James Connolly was not infallible, he remains a giant for those who are out to fashion a better world today.

Uniting and fighting – how unemployed workers can be collectively organised