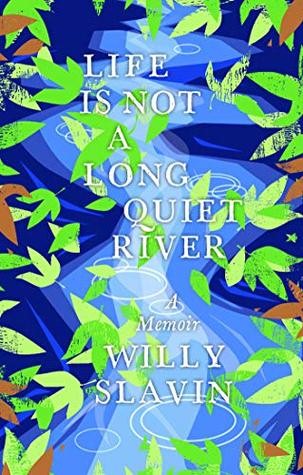 I don’t know if Slavin is ‘prole-ier than thou’ but he’s certainly holier than most. This troublesome priest, who will be eighty in January not only takes Jesus seriously – he takes him literally. Father Slavin, as he does not, on unimpeachable scriptural grounds, like to be called, used his small pension to buy a compact camper van – home as away – and sold all his worldly goods and went to live in a hermit’s hut, forsaking Glasgow for the Kingdoms of God and Fife.

These are the backward glances of a diligent parish priest whose worldview refused to be parochial: the tale of a clergyman who then qualified as an educational psychologist; a chaplain to prisoners and hospital patients; a good doer rather than a do-gooder, whose role on important committees was manifestly committed, much to the benefit of old people, rough sleepers, drug users, those living with and dying from, HIV, and many others scorned, abandoned and impugned, since the sermon on the mount. In his overlapping vocational fields, no lily went unconsidered.

Slavin’s life has been joy giving, right living, liberation theology, combining theory and practice and theory in practice. It has amounted to a praxis of profound moral efficacy. In his militant detestation of poverty and the social, educational and cultural impoverishments it entails, he unapologetically admits to a Latin American-style, option for the poor. While ‘Marx + Jesus = Liberation Theology’ is far too simplistic a political or religious equation. Archbishop Helder Camara is quoted: ‘When I give food to the poor they call me a saint, when I ask why they are poor, they call me a communist.’

Glasgow University has for its mediaeval motto, ‘via, veritas, vita’. Slavin might well have lived his ministry under that exacting rubric. If Jesus is the way, the truth and the life, then to follow that way is quite simply to be that way. Put Christ back in Christmas? Sure! And, while we’re at it put Christ back in Christianity!

If you are looking for a nuanced meditation on the finer points of theology, this down-to-earth, yet heavenly, book will withhold such erudite insight. One gleans a political outlook typical of many in austerity resistant, fascist fearing, culturally re-nascent Scotland: progressive, open, inclusive, well intentioned, in favour of broadening and deepening the compassionate consensus; ‘one of us’. If there’s not much theology or ideology, this memoir, possessed of an unfussy, flowing, confidingly conversational style, has plenty of first-person parables to pass on.

A tripartite structure based on the (diocesan) priestly promises – not (monastic) vows – of obedience, poverty and chastity, nonetheless, allows a narrative arc to be described. This takes us from the author’s birth in England, in 1940, where his skilled engineer father was employed, through family, primary school and parish life in Penilee, close to the Rolls Royce factory his dad had eventually found war work in. And then onto secondary schooling, as a boarder at Blairs’ College on Deeside, spiritual formation in the Scots College and Gregorian University in Rome, and studies at Glasgow, before a very varied series of postings, including a long stint in Bangladesh, where he became fluent in Bengali. Fellowships and networks let the him wander and chronicle in the journal he has maintained since boyhood.

As an adolescent, his diary entries remained pure in thought, though the staff at the seminary explicitly proscribed ‘dangerous friendships’. Many of his classmates went on to seek heavenly bliss via the wedded sort. One sighs in sympathy at his poignantly candid confession of falling, platonically, yet passionately in love with women who might otherwise have become spouses. Slavin maintained his chastity by taking to the hills, conquering every Munro, and the highest peaks of England and Wales. These affairs of the soul reveal a great deal about his tender humanity and tenacious faithfulness to the undertakings he vouchsafed as a young man.

The memoir nearly shares its title with another movie that influenced the film fan, 1988 French comedy, Life is a long quiet river. And this life of service and services has all too evidently had its roaring eddies and rapids.

Blairs’ College was an idyll of sorts. Camaraderie and conviviality are affectingly evoked. No pressure was put upon the students definitely to become priests. And many did not. The commonweal of caring and sharing. A life changingly brilliant teacher. Priests in good faith, standing and conscience who abused no one and assisted everyone. The Irish in Scotland and the eloquence and education that let them rise above discrimination to positions of power and influence. Italian Scots, so significant ecclesiastically and in culture and cooking. A tale of two Partick churches. Simon and Peter, and the Poles who populate the former.

Some found Slavin’s sermons self-righteous. With a quarter of Scottish infants enduring poverty likely to be lifelong, I thought, he was on the money, so to speak. And boy, did he speak; talking the talk and walking the walk as few ever do. According to a Myers Briggs personality test, Slavin is a born manager. Certainly, his memoir affords evidence of exceptional talent as a problem solver, nettle grasper and bull by the horns taking, no nonsense, sorter out.

The Good Book has inspired a good book by a good man. For his love of life, and life of love, Slavin deserves to be remembered in the prayers, even of readers who do not pray. For, as Walter Benjamin said: ‘attentiveness is the soul’s true prayer’. Slavin has paid attention. And its price.

Donny O’Rourke is a Glaswegian poet, journalist, television producer, university teacher, protesting Catholic and ‘faithiest’ who retains his belief in liberation theology and the pedagogy of the oppressed.