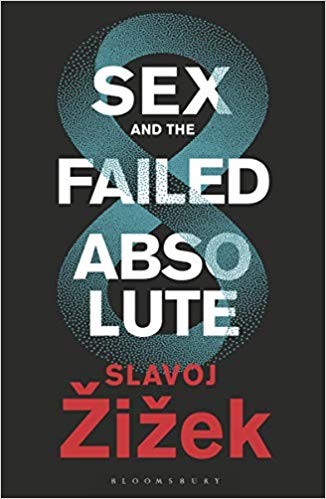 Žižek’s first English-language book, The Sublime Object of Ideology, appeared in 1989 and was an immediate sensation, comparable to watching Pulp Fiction when it came to cinemas in 1994, or seeing one of Alexander McQueen’s runway shows a decade later. There was a realisation that the book – nay, the very first chapter ‘How Did Marx Invent the Symptom’ – was intellectually electrifying. It distinguished its author and proved to be the launch pad for his rocketing journey to international fame.

Fast forward to 2019 and Žižek’s latest book, Sex and the Failed Absolute, induces an instant shot of déjà vu. Hostile critics might say this is because a lot of what he says here can be found scattered across his previous publications. But this would be unfair because he has accomplished a remarkable and pure distillation of ideas that, yes, he has been repeating but also refining and honing over three decades. The result is a penetrating new study that redefines a term that most would be wary of returning to: dialectical materialism. What the feeling of déjà vu in reading Sex and the Failed Absolute does come from is the re-experiencing of the excitement that characterised reading his first book back in 1989.

Dialectical materialism, for Žižek, is a philosophy endorsed by the fundamental undecidability that quantum physics points towards as the oscillating nucleus of the universe. Dialectical materialism has an unmistakable Stalinist ring but Žižek, in a book uncharacteristically free of the kind of jokes that would once have gleefully cashed in on this, is deadly serious in stating the reversal behind how this term should be understood.

Stalin defined dialectical materialism in terms of an interconnected whole that constantly underwent development and change, driven by inherently natural contradictions. Žižek, instead, proposes disconnections and partial perspectives, fueled by contingent changes that occur out of order, either as premature failures or as registrations after the event. Repetition not development; unorientables replace evolutionary progress.

Contradictions remain ubiquitous but are no longer reducible to a blasé, positive-negative struggle of opposites (a là male/female, yin/yang and so on). Contradiction is constitutive and, because it is at the heart of everything, whatever arises is necessarily inconsistent and not-All. What we think reality ought to be — something substantial and whole – is deeply thwarted by its own impossibility of being. This deficiency in reality is what underlies the first of the theorems that Žižek structures his book around. Reality is marked by a failure to realise itself, arising from a fundamental incompleteness. At a sub-atomic level, there are no ‘bits’ of solid stuff, there is no core or dense centre, just a proto-reality of quantum oscillations. This is materialism without – as we ordinarily understand it – matter.

The transcendental, on the other hand, is the frame that defines the coordinates of our everyday reality. Kant inaugurated the realisation that what we take as reality is shaped by categories in the mind of the subject (cause and effect, for example, and substance). He deemed the core reality of objects that lies behind their appearance – the ‘thing-in-itself’ – to be impenetrable and ultimately unknowable.

Žižek looks to Hegel and Lacan for the radical steps that locate the split between subject and object within the subject itself. And his second theorem pinpoints sex as the space where the human animal confronts the ontological incompleteness that renders everything as torn. Human sexuality is characterized by a meta-physical force that spiritualises sexual enjoyment as a goal-in-itself. It is observed how the Catholic church, fearing this claim to a higher dimension in our lives, ironically seeks to keep us at the level of raw animality by insisting on tying sex with procreation.

Sexuality bears the subject’s indelible failure to fill the incompleteness at the heart of being. Difference between two sexes, far from marking male and female as positive entities, is the pure difference, the inconsistency, that cuts into any sexual identity. A part of Žižek’s reservations about #MeToo is its inability to recognise the antagonisms that undercut notions of an individual possessing an inner identity prior to social mediation.

The third theorem transposes the earlier two into unorientable surfaces – the Möbius strip and the Klein bottle – as ways of understanding and visualising the puzzles and paradoxes of quantum physics. The explication of the kind of materialism at work in the universe is fiendishly intricate at times and requires close reading. It bears testimony to the power of the Lacanian death drive, the self-reproducing loop of desire that endlessly embodies its lack by aiming for something that it knows cannot be reached. Žižek’s death drive is the pursuit of what he calls ‘less than nothing’ and the intelligence and energy that fuels his drive gives life to his dauntless endeavour.