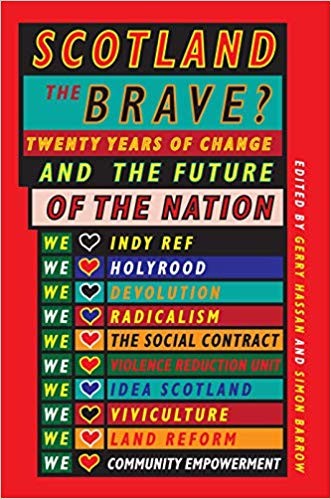 Gerry Hassan and Simon Barrow (eds.) Scotland the Brave? Twenty Years of Change and the Future of the Nation, 2019, Luath Press £14.99

This is a hugely ambitious book to mark the twentieth anniversary of the Scottish Parliament. It consists of forty chapters each written by a diverse set of people whose biographies alone take up ten pages. The chapters are grouped into six separate sections plus an introduction and each chapter is restricted to between five and ten pages including references and the book overall is 340 pages long. This means the book is more a dip into rather than a continuous read. However, the editors with assistance from 22 advisors have marshalled the contributions to some cohesion.

The introductory chapter by Neil Ascherson states ‘I have a nightmare’ after Brexit Britain ‘will become a place the young want to leave.’ He compares the SNP to the pre-1918 Irish Home Rule Party in whom ‘the fires had died down on the national question’ and notes ‘impatience always breaks through’ and states we must act ‘As If’ Scotland is already independent.

Many of the following chapters suffer from a lack of space. The three ‘economy’ chapters all highlight the need to break from the ‘casino capitalism’ but lack the space to explain solutions. The social justice section’s eight chapters covers public health, the NHS, education, housing, and the criminal justice system. Gerry McCartney notes the positive effects of the smoking and alcohol price restrictions whilst noting that that poverty which is the main cause of health mortality relies in reserved powers. Douglas Robertson notes that whilst slum housing has been removed, disrepair in private housing persists and ‘rentier capitalism’ has returned. Fergus McNeill notes that the first report of the parliament was on reform of the justice system and, however, despite progress there much is to be done.

The public realm section consists of nine chapters covering participation, gender, race, democracy and environment amongst other topics. Two of these involving dialogues between experts in ‘participation’ and separately humanity and public service are distinctive. Mike Small imagines a post-oil Scotland and points out the major environmental and economic issues the Scottish Government needs to address.

Cultures of imagination deals with the press, broadcasting, arts, literature, music, architecture and design, football and separately religion! The authors include Douglas Fraser, Ruth Wishart, Richard Holloway and many others each of whom is well worth reading. Meantime, place and geographics starts with Andy Wightman on land reform and follows with Malcolm Maclean on Gaelic followed by five chapters on individual cities or communities. George Kerevan suggests Edinburgh could ‘become a global laboratory for post capitalist living’. John Bone says ‘viewed with a wider lens, Aberdeen’s oil boom comes to appear as a period of hiatus in a story of long-term historical decline’.

In the wider world, William Walker looks at how events have progressed since ‘Scotland’s Future’ was produced in 2014. Trident would ‘again be vexing’ and the entirety of Scotland’s defence issues remain ‘to be negotiated’ post-independence. In the final chapter, Fintan O’Toole looks at England, Brexit and Scottish independence within a historical literary context quoting John Stewart Mill, George Orwell, W.B. Yeats amongst others. He states that as an outsider, what interests him about Scottish independence ‘is not that Scotland might become a new state, but that it might become a new kind of state.’ This is very much the theme of the book so it is well worth dipping into and buying.