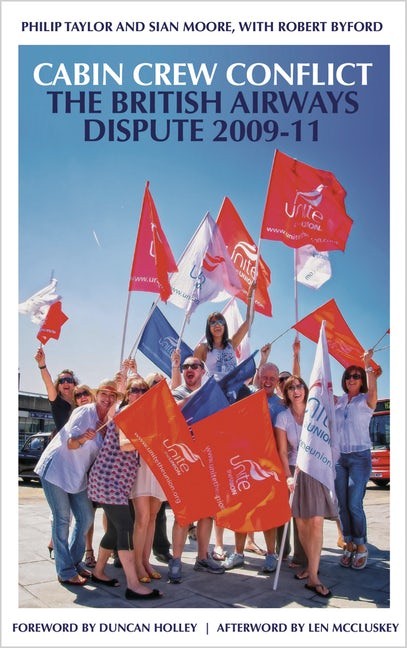 This book is about one of the bitterest industrial disputes in recent times. In 2009, cabin crew, members of British Airways Stewards and Stewardesses Association (BASSA), part of Unite, began what would become a historic battle to protect their working conditions and save their union. Facing unprecedented legal obstruction; Labour government opposition, worried about bad press before the 2010 general election; intensive management surveillance and counter-mobilisation; and media hostility, cabin crew took unprecedented levels of strike action in a two-year campaign of resistance. BA initiated legal proceedings against BASSA leading to a High Court judgement in December 2009, being one which threatened the legality of unions being able to strike. So, resistance took place within the most challenging of contexts – but it took place.

The authors made sure it tells the fascinating story from the perspective and in the words of the cabin crew: ‘The principal aim … Was to write a book for BASSA members, activists and representatives, which would provide a meaningful account of events and their involvement in them … and also to deliver an analysis that would appeal to a number of audiences simultaneously’. The book will be very useful for those interested and active in trying to build, extend and strengthen organisation in workplaces and sectors with little or no tradition of union struggle.

Based on extensive testimonY and access to BASSA meetings and its social media network, the book reveals the developing solidarity forged in a workforce diverse in gender, sexuality, race and nationality. As the authors say: ‘Gender, particularly, should be commented upon in terms of the resilience of the cabin crew, who had been stereotyped as middle-class, union-lite ‘trolley-dollies’.

The dispute cost BA £150m in lost revenue. The issues being fought over were the attempt to impose major changes to crew’s working conditions, changes that threatened the very existence of BASSA. Of particular relevance to activists is the focus on BA’s legal challenges to the right to strike. It considers the company’s ‘counter-mobilisation’ measures to try and break the strike; to polarise the workforce; to ‘decapitate’ BASSA; to victimise activists and its use of sinister surveillance tactics.

The BASSA branch secretary during the dispute writes in the foreword: ‘This was a dispute engineered by BA to bring about the end of a … union that had long been a thorn in [its] side, a union that over the years had fought tooth and nail to protect the terms and conditions of workforce prepared to stand by their union. BA failed. BASSA is alive and … kicking. I’m proud of what … members did’.

A later chapter looks at the dispute’s aftermath: the proliferation of industrial action in civil aviation and unionisation of the new ‘mixed fleet’, providing an account of their remarkable action against poverty wages and conditions, which saw the workforce take 85 days of strikes in 2017. The struggle to unionise the industry continues. In 2018, Ryanair recognised Balpa, the pilot’s union, after 32 years during which its CEO, Michael O’Leary, refused to deal with unions, previously boasting: ‘hell will freeze over before Ryanair is unionised’. Six months later, Unite secured recognition at Ryanair so that cabin crew have full collective bargaining rights.

Dave Sherry is a member of the editorial committee of the Scottish Left Review.