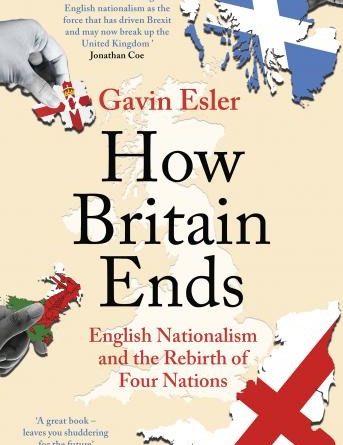 Born in a Clydebank council house, Esler is the descendant of Protestant refugees from Germany during the Thirty Years War of 1618-1648. Further, in 1912 six of his Ulster relatives living in Belfast signed the Ulster Covenant in the hope of remaining British rather than becoming Irish. In a sense, this book carries on the family tradition of political resistance. He is, however, the reverse of a dogmatic conservative. When he was the main presenter on BBC’s Newsnight, he was creatively flexible and ethically firm. He is an extremely erudite radical with no rigid ideology. As a writer with How Britain Ends, he has produced a book completely relevant to Britain’s dire political conditions. In the midst of a combination of economic and medical health chaos, he says ‘I want to explain why the UK cannot survive English nationalism.’

Does he mean it is fatalistically too late to stop Johnsonian English nationalism or that this book is designed to reveal that nationalism is as much a parody of genuine English tradition as Johnson is of Churchill and so thwart it? The following witty passage clarifies this problem to some extent: ‘I should also thank British governments over the past few years, in particular, that of Boris Johnson. They have inspired me to think how it came to pass that such a creative, competent and diverse group of people inhabiting these islands has ended up with a generation of leaders of astonishing complacency and incompetence’.

Esler is not alone in reviling post-Brexit Johnson. He is able to ruthlessly expose Johnson’s perverted historical rhetoric and ideas (in so far as the PM is capable of consistent thought). The use or rather abuse of Edmund Burke is particularly absurd in that it stresses English organic evolution while everyone else evolves from fabricated ideologies. There is a post-Trumpian echo in Johnson’s ‘England First’. This logically entails the break-up of the UK. Johnson’s totally counter-productive foray in Scotland does not mean a change of heart. It means that he knows that by decree the PM who loses Scotland has to resign immediately.

Esler balances his intelligent negativism towards Johnson and company with his profound positivism towards the UK. He seems always to have had a deep need to know each part of the UK. As a student he went from Scotland to two English universities to study Irish literature. With the BBC, he has had the benefit of working in every British capital. This makes his profound distaste for the English ruling class ever sharper. It has given us austerity, marketisation of the NHS that devastated it prior to Covid and the Brexit Referendum. To get his way over Europe Johnson immediately removed the whip from 29 MPs, thus depriving the Tory party of any remaining wisdom and integrity. Gavin Esler correctly believes that the appearance of right-wing English nationalism heralded the death of the UK. If the Irish descended Catholic Biden had not won, we might well have become an annex of Trumpian America.