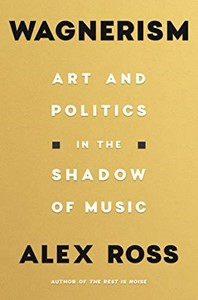 Readers will be more than familiar with the whole panoply of political ‘-isms’ that range from those of collective struggle to those named after specific individuals. The same is rarely true for artists, or more specifically, musicians. So, whilst we have Leninism there is no such thing as Lennon-ism; Stalinism but not Shostakovich-ism, Trotskyism but not Tchaikovsky-ism; such ‘-isms’ simply do not exist. And whilst each of these artists remain influential, admired and even inspirational, none of them sired an -ism: Wagner, however, did.

Borrowing the term ‘ambivalence’ from a 1943 essay written by Eric Bentley (an essay which asks the question ‘Is Hitler always right about Wagner?’), the music critic for The New Yorker, Ross provides two examples from the 1882 Bayreuth Festival production to illustrate the fundamental condition of Wagnerism. Firstly; whilst Wagner never intended to ban applause from Parsifal, he did request that there be no curtain calls after Act II so as not to ‘impinge on the impression’. When though, at the end of the performance, the audience simply stood up and left, Wagner was left plaintively asking whether they liked it or not: Wagner’s word could unintentionally become law. Secondly, when at that same performance the ever enthusiastic Wagner called out ‘Bravo!’, his intervention was roundly hissed by the audience. Even Wagner could not be allowed to spoil the Wagnerians’ worship of Wagner. In these two moments, Ross asserts, Wagnerism took leave of its Master.

Following an initial case study of the ambivalent relationship between Wagner and a young acolyte that Ross labels ‘the first Wagnerian’, the philosopher Friedrich Nietzsche, the central chapters broaden out to national and cultural case studies. This includes chapters on Wagner’s influence on decadence, esotericism, Zionism, gay rights, modernism, feminism, the list goes on and on, until it gets to the most successful, and the most persistent of the appropriations: that by far-right German nationalists in the 1920s.

Scottish Wagnerism is sadly absent, and Ross has surely missed the opportunity to reflect on the tragic fate of Glasgow School of Art. Amateur stagings of Wagner operas were performed there in the 1890s. Later Mackintosh and Macdonald would use leitmotif techniques to achieve profound aesthetic and psychological consequences. More recently, Alexander Stoddart has acknowledged that his modernism is solidly built on Wagnerian foundations. Perhaps then, it was just a tragic irony that led to Mackintosh’s gesamtkunstwerk on Garnethill being consumed by flames like Walhall at the close of Götterdämmerung. That, or criminal negligence. One of the two.

Ross is wise and gracious enough to acknowledge that much of the national European studies that he recounts have been written, in finer detail, elsewhere. Rosamund Bartlett’s Wagner and Russia, for example, provides considerably more detail on the stagings of Wagner in the early Soviet Union where the most frequently performed of Wagner’s operas was Rienzi. Nowadays, most productions of Rienzi adopt a derogatory, critical perspective on the eponymous hero, portraying him, at best, as a populist demagogue or, at worst, a proto-fascist. Such productions provide an affirmative to Bentley’s famous question and, Ross argues, grants Hitlerite thinking with a belated cultural victory.

Since Wagnerism is not a book about what Wagner thought, but what others thought and made of him and his works, it matters not, writes Ross, what Wagner thought about Jews or people of colour – what matters, in this context, is what they thought of him. Amongst those who make a simplistic conflation of race and culture, W.E.B. Du Bois’ Wagnerism is rarely discussed. Ross resurrects Du Bois’ lifelong personal and political engagement with Wagner and it will surprise many that The Souls of Black Folk, published in 1903 and described as the definitive text of the African American literary tradition, should culminate in a remarkable reworking of Wagner’s opera Lohengrin. For Russell A. Berman, Ross writes, both Du Bois’ story and Wagner’s opera are tales of incommensurability, but ‘when the white woman in the New York opera house recoils from the touch of a black man sitting beside her, it is the music of Lohengrin that holds out to him an alternative model of human relations; one in which she would not question his rank or race’. Thirty-three years later, when Du Bois shunned the 1936 Berlin Olympics to attend the Bayreuth Festival, he reported that he suffered no race prejudice and that in the hotels and restaurants of the town, he was treated with nothing but respect. That Du Bois felt less open hostility in Nazi Germany than Roosevelt’s America is rightly judged by Ross to be a devastating verdict on liberal, egalitarian American race relations.

The most frequently used word in the many reviews of Ross’ book is ‘masterpiece’. It’s mentioned four times on the dust jacket alone. As Ross documents in this consuming, enthralling read, poets, politicians, writers and tyrants have all appropriated for their own particular purposes. Everyone, it seems, wants a piece of the Master. Ross’ book is a treasure house of gossipy anecdotes of the half-mad, the nearly always eccentric, the decadent, the dreamers, the obsessive, the desperate and the just plain lonely. It is consequently sad, poignant and, in places, immense fun. At over seven hundred pages Wagnerism will, of course, appeal primarily to the already initiated – but loved and loathed there is not a path into the twentieth century that bypasses Wagner.

Graeme Arnott is a member of the Wagner Society of Scotland