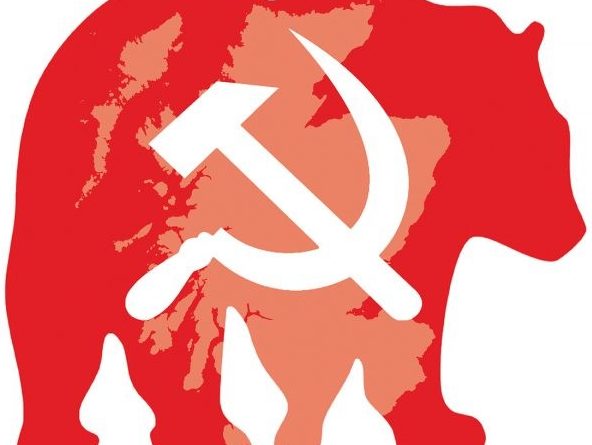 I grew up in Scotland in the 1950s and 1960s not far from the Rosyth naval base. Awareness of the danger of nuclear war between the superpowers led me to CND and some token activism. I recollect when in 1962, I acquired a pot of emulsion and a brush. In the middle of the night, I sneaked out and painted ‘No Polaris’ in huge letters on the pavement of Kirkcaldy High School. That was my contribution to the struggle. 50 years later I witnessed an SNP government committed to the removal of nuclear weapons from Scotland. Correspondence in the Herald and other Scottish papers recently has brought that policy into question. The SNP has already endorsed NATO but is now being urged to accept Faslane as a base for submarines with nuclear weapons. A proponent of this is Trevor Royle.

He is very knowledgeable about the history of the development of the Cold War. For me, this was part of the fascination of the book. Equally fascinating were the anecdotes. I had never heard of the marine, Andrew Conron, of Bathgate. After being taken prisoner, he decided to stay in The People’s Republic of China and contribute to the construction of socialism. He learned Chinese, and worked as a translator. Other anecdotes include a mention that the much-vaunted V-bombers had no provision for the crew to bail out and did not have sufficient fuel to return to Britain after delivering their deadly cargo.

Nor had I heard of ‘The Laird’s Lug’ in Edinburgh Castle. This is a medieval listening device built into the Great Hall. It enabled a listener above the hall to listen on to conversations. When Gorbachev was invited to speak there, his minders became aware of this and asked for it to be bricked up. I was not aware of the role of my alma mater, Edinburgh University, in providing platforms for discussion on Strategic Studies between East and West.

Royle is clearly an insider. It seems evident that he played some role in the intelligence and defence apparatus. I still have my unilateralist opinions, reinforced by the possibility of Scotland leaving Britain. That possibility still poses the question, ‘What is to be done with Faslane?’

I am prepared to continue a dialogue on that question although for me ridding us of these nuclear weapons is still on the agenda. So too is an end to the wars in Afghanistan, Iraq, Syria, Libya and Yemen. Foreign affairs and defence do not get much exposure in the political sphere – in Scotland or in the wider UK. Can we take steps to put them up there for discussion again? As part of that, I have invited Trevor to come and talk to us in Rothesay on these matters.

Hamish Kirk is a retired teacher, linguist and translator living on the Isle of Bute.