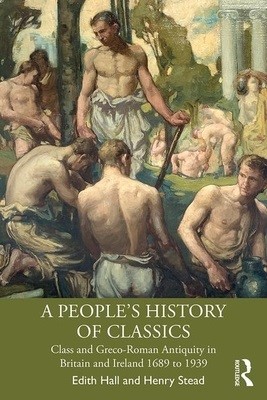 In Britain, collusion between Classics and class is portrayed in terms of a privileged few brandishing their acquaintance with Greek and Latin as an emblem of their place at the top of a hierarchical society. Hall and Stead, well aware of this and its material basis in family affluence and private schools, tread a path-breaking course by opening up a new approach: the unplumbed role of classics in working-class culture.

The first of their book’s four parts covers the emergence of Classics as a discipline and the challenges to its elitist status from readers, poets and visual media. Part II looks at the ways communities mounted their challenges to ruling-class hegemony over the classics. The chapter on Scotland points to the country’s egalitarian tradition which saw a huge number of unofficial ‘adventure schools’, not unlike the Irish hedge schools, develop in the seventeenth and eighteenth centuries. It was in one of these, in Alloway, that Robert Burns studied Latin, nurturing his future renown as a cultured Scot able to contest the destiny that his status as a labourer made seem inevitable.

The Scotland chapter examines four particular aspects of the way ancient Greece and Rome were experienced by the Scottish working class: the bursaries that provided educational opportunities for boys in Aberdeen and the north-east; the publishing ventures of George Millar in Dundee and the Peebles-born Chambers brothers; the use Thomas Carlyle made of classical myth in his denunciation of capitalism; and the novel Spartacus by Lewis Grassic Gibbon.

Part III, ‘Underdogs, underclasses, underworlds’, brings to light extraordinary working-class individuals (‘ragged-trousered philologists’) whose love of classical learning never earned them recognition and for whom adversity became their environment. They include Andrew Donaldson, born in the Fife village of Auchtertool, whose poverty and eccentricities prevented him making a success of his accomplishments as a classicist. Fluent in ancient Greek, William Wilkie, the ‘Scottish Homer’, composed a nine-book epic about Thebes while ploughing his fields to plant potatoes. Glaswegian James Moor was able to achieve academic success, becoming a Professor of Greek at Glasgow University, but his proletarian habits alienated colleagues: living with his working-class wife in a poor quarter of the city and frequenting taverns, he died insolvent.

Equally absorbing material in this part of the book unearths more that will be new to most readers, looking at how Greek was used in various recherché contexts, from sex manuals to shopkeeping. A chapter traces the ways performers of the human body, the likes of strongmen, strongwomen, dancers, actresses, contortionists – invariably working-class – referenced the classical world to authorise and widen their appeal.

The book’s final part brings to the fore the importance of classical material in the experience of work for the labouring classes. Wanlockhead in Dumfries and Galloway is given due recognition for its Miners’ Library founded in 1756 and the village school where children had access to a classical education. Other chapters cover trade union banner art and the work of communist theatre practitioners in the 1930s.

A People’s History of Classics is a trailblazer, opening up to view a fertile landscape that has for long been obscured by clouds of class partiality. Each of its twenty-five and fully referenced chapters acts as a signpost to byways that are full of surprises and lessons to be learnt.