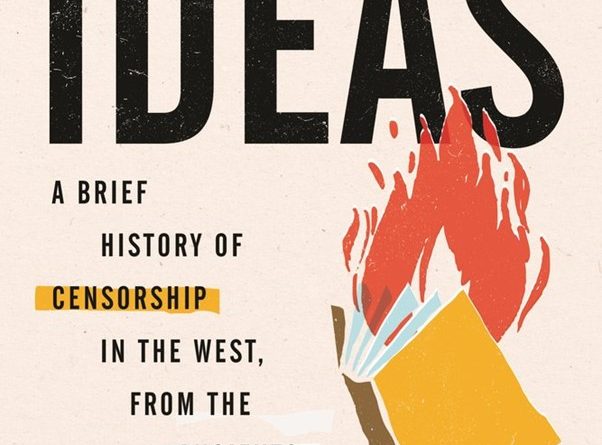 A history of censorship is a history of the world and the author of Dangerous Ideas wisely adds the word ‘brief’ to his book’s subtitle. That still leaves plenty of ground to cover and chapters attending to the ancient world and pre-Gutenberg Europe are followed by five devoted to the centuries that came after and a final one looking at the contemporary world. The historical stories that fill the pages are variations on what should not come as a surprise for, as Leonard Cohen sings it, ‘everybody knows’.

But what is more nuanced and trickier to handle goes beyond a simple polarisation between freedom of expression (good) and censorship (bad). Such binaries are comfortable when they allow the positioning of ourselves on what seems clearly to be the right side but situations are not always neatly classifiable. Having a right to watch snuff movies is not on a par with the right of Edward Snowden to leak classified documents revealing secret mass surveillance programs. The creating of new offences on the stirring up of hatred – as proposed in Scotland’s Hate Crime and Public Order Bill – has the potential to impact negatively on freedom of expression.

Berkowitz’s book is at its most engaging when looking at conflicts of interest between the right to say or print what one wishes and the harmful consequences of, say, hate speech, pornography or fake news. Then there are complications arising from publishing material like cartoons of Muhammad. Dangerous Ideas argues that censorship doesn’t work even though the author acknowledges that limitless toleration of harmful rhetoric comes at a price and that free expression can be irresponsible and dangerous when the consequences are ignored. But he also concludes that ‘the elimination of harmful rhetoric protests the well-being of some in the short term, but there is no evidence that it eliminates the darkness behind the words’.