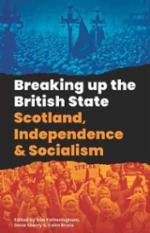 Two books address the same two questions: why should socialists support an independent Scotland and how do we get there? Breaking up the British State is a collection of ten essays explaining the events that shaped the modern British state and Scotland’s relationship to them. The essays were written by members of the Socialist Workers Party in Scotland, constituting their manifesto for ‘indyref2’ and beyond. Scotland & the National Question has five chapters containing articles and internal documents from the Socialist Party Scotland and its antecedents in Scottish Militant Labour that chart its splits over the Scottish question from 1992 until 2020.

Both agree that an independent Scotland would represent a serious blow to British capitalism but that without significant structural change, it will be of little benefit to working people. They concur that the current programme of the Scottish National Party will result in two capitalist blocs with austerity policies facing each other on one island. They also agree that the fight for independence cannot be fought without raising demands for the radical improvement of working-class lives and arguing for a socialist future. But there the agreement ends.

Breaking up the British State places great emphasis on building grassroots organisations such as All Under One Banner and Now Scotland ‘to fully mobilise the collective social power of the working class, the only force capable of confronting state power and moving beyond the timidity of the parliamentary wing of the independence movement’. This united front should include unions as well as anti-racist and climate campaigners.

Scotland & the National Question, on the other hand, argues that ‘a new mass workers party in Scotland’ is necessary to ‘lead a mass working class movement for independence while campaigning against all cuts and for public ownership and socialist policies’. It advocates a new Labour-type party, to be established by Scottish unions, ‘not necessarily from its inception having a Marxist programme,’ but which would allow ‘the forces of the Socialist party [to] … seek to be a powerful Marxist influence.’ This seems to be the old Militant policy of entryism in new clothes. In the meantime, if a new referendum is refused by Westminster, a ‘Constituent or National Assembly’ should be called, similar to those in France in 1789 and Russia in 1917. ‘Marxists would call for such an Assembly to have a revolutionary character and to be convened and made up of delegates from mass workers’ organisations, trade unions, neighbourhood assemblies, mass youth organisations and so on.’

In dealing with the national question, the methods of the two publications could not be more different. Breaking up the British State has an erudite and elegantly written essay by Bob Fotheringham and Donny Gluckstein entitled ‘Scotland, the National Question and Marxism’, which outlines the historical development of the modern nation state and the attitude of Marx and Engels to the national question at the time of the European revolutions of 1848. They compare that with the fresh insights of Trotsky in 1905 and Lenin in 1917, when colonial imperialism was at its zenith. They then ask how these theories might be applied to Scotland today. Their chapter is followed by three substantial essays: ‘The Formation of Scotland’, ‘The Making of the Scottish Working Class, 1787 to 1850’, and ‘Red Clydeside’. Taken together, these four chapters provide a map to the present day and the ‘twin souls of the independence movement’ – nation and class – together with the democratic challenge for an independent state: ‘the potential to ‘grow over’ into something more ambitious’.

The difficulty with the arguments of Philip Stott and Peter Taaffe is that they are tangled with disagreements in their own party. Their chapter, ‘Applying the Method of Marxism’ is in two parts. The first is a document written by Taaffe in 1992 when he was general secretary of Militant. It was in response to the rise in popular support for a Scottish parliament. The ‘Scottish turn’ led to the formation of Scottish Militant Labour and split the parent party. Those who opposed it are described as ‘self-appointed ‘‘bolshevik historians’ [who] do not understand the history of the Bolshevik Party’. Quoting Trotsky, Taaffe describes the ‘confused consciousness’ of Scottish workers as the ‘outer shell of immature Bolshevism’.

The second part of the chapter, by Stott, was written in 2003, and is a criticism of the leadership of the then Scottish Socialist Party, which he accused of ‘promoting illusions in capitalist independence at the expense of socialism’. Scottish Militant Labour split again over the formation of the Scottish Socialist Party. Stott writes that this was a ‘squandered opportunity to build a sizeable left party in Scotland’, and that the leaders of the Scottish Socialist Party ‘abandoned Marxism and went down the road of left nationalism and reformism, with calamitous consequences.’ Stott was in the minority in this split and with others formed the Socialist Party Scotland, publishers of Scotland & the National Question. For any new reader looking for clarity on the national question, this is not the place to start. Lenin and Trotsky are quoted often, but in a fashion more akin to scriptural dispute than political analysis.

The sidelining of Labour is of central importance to any analysis of Scotland today, and Dave Sherry and Julie Sherry in Breaking up the British State devote nearly eighty pages to the party and the unions. Their chapter, ‘The Decline of the Labour party in Scotland’, takes us through many important industrial disputes from the 1970s onwards, as shop-floor trade unionists were forced to overcome the hesitancy or opposition of Labour-leaning union officials to secure even minor advances. Beginning with the mass solidarity shown for striking workers at East Kilbride’s BSR factory in 1969, they guide us through a near comprehensive history of modern industrial relations in Scotland. The unfortunate legacy of a failed ‘popular front’ strategy around the ‘work-in’ at Upper Clyde Shipbuilders in 1972 is closely followed by the miners’ strike, which smashed Tory wage controls. We are taken through the second miners’ strike in the 1980s, the closure of car manufacture at Linwood, the occupation by the women in Lee Jeans at Greenock, and a wave of occupations and sit-ins that they generated in other places. The theme running through this and most of the disputes up to the present is that, as at the Uddingston Caterpillar fight against closure in 1987, ‘Despite official passivity, the workers mounted a terrific fight. They defied the law, stayed solid, and won widespread support.’

Labour in government is also dissected to find the origins of its decline. We are reminded of the wage freezes and welfare cuts of the Labour governments of 1964-1970 and 1974-1979, which led to the ‘Winter of Discontent’ in 1979 and ushered in the government of Margaret Thatcher. Scotland was a guinea pig for her Poll Tax, introduced in 1989, which a Scottish Labour Party conference in 1988 refused to fight, and it was implemented by the biggest councils, mostly controlled by Labour. Local opposition was overwhelming, leading to the creation of the Anti-Poll Tax Federation, led by Tommy Sheridan. Labour leader Neil Kinnock called them ‘toytown revolutionaries’. The former Labour MP, Jim Sillars, won a spectacular ‘no poll tax’ by-election victory for the SNP in Govan with a 33% swing from Labour.

The ‘new’ Labour government of 1997, led Blair, overturned the long-standing policy of nationalisation and his chancellor, Gordon Brown, declared: ‘The Labour Party is now the party of modern business and industry. For the first time it has set down its commitment to a market economy’. He introduced the Private Finance Initiative, again taken up by Labour-controlled councils, affecting the finance of schools, hospitals and housing. The government also failed to reverse Thatcher’s ‘reforms’, including anti-union legislation. And, of course, there was mass opposition to the Iraq war. ‘New’ Labour did, however, introduce devolution, which had been mooted by Tory Prime Minister, Ted Heath, in 1974 to counter a growing SNP. The 1997 referendum saw 74% vote yes to a parliament in Edinburgh.

The Tory years from 2010, which began with Labour winning 42% of the vote in Scotland and 41 Westminster seats, saw utter defeat in 2015. Even Jeremy Corbyn and the Momentum movement made little impact in the Blairite Scottish Labour Party. ‘The weakness of Labour’s opposition to austerity at both national and local level,’ argue Sherry and Sherry, ‘and the absence of a lead from the union leaders … its role in outsourcing and privatising council services, and its attacks on workers’ conditions and pay all … combined to weaken Labour’s fifty-year hold on Scottish politics. The final straw was its rush to wrap itself in the Union Jack alongside David Cameron in the 2014 referendum’.

The SNP and the wider independence movement came to be seen as the only way to resist Tory attacks, and they are given an equally rigorous analysis in the three concluding chapters of the book. SNP policy is for an independent Scotland in which very little structural change would take place. The Holyrood government’s 2020 Report of the Advisory Group on Economic Recovery following the Covid crisis, for example, recommends ‘a top-level Council of Business Advisers’ to determine economic priorities. So, argue Iain Ferguson and Gerry Mooney in ‘Neoliberalism with a Heart? Life Under the SNP’, independence is not the end goal. ‘Rather, independence would provide the opportunity to reject Tory policies of austerity, privatisation and racism and to build a different kind of society, free from poverty, inequality and oppression’.

How to get there? The contributions of various leftist writers and activists are scrutinised in Bob Fotheringham’s chapter ‘Scottish Independence: Beyond the Limits of Nationalism’. He examines the writings of Stephen Maxwell, who in the 1970s formulated the case for ‘left-wing nationalism’; Tom Nairn and his many contributions including his book The Break-up of Britain; Kenny MacAskill and Lesley Riddoch, who both look to the Nordic model; Robin McAlpine of Common Weal and its impressive range of policy papers; and George Kerevan, with his policy of a new leadership elected by a national convention and a post-independence workers party ‘embracing the unions, Labour supporters, and the left of the SNP, and a broader left sentiment released from its old constitutional commitments’ (his words). It also discusses John Foster’s contribution for the Scottish Communist Party on ‘Radical Federalism’. Fotheringham’s main conclusion is that ‘we cannot leave the argument for socialism and workers’ self-emancipation out of the case for Scottish independence. To do so would condemn Scottish workers to the continued exploitation by the bosses, with all the consequences of poverty, exploitation and racism which we are subject to under the British state.’

Scotland & the National Question is something less than its subtitle, A Marxist Approach. It is more a collection of papers and articles that might interest a future historian of orthodox Trotskyism and the Scottish question, although the points of its manifesto are spelt out clearly at the end of the chapter, ‘SNP’s White Paper Will Not Deliver Change’. They include public ownership of industry and utilities, reversing social and benefit cuts, no to NATO, and abolition of anti-trade union laws. For anyone wishing a clear and historical exposition of Marxism and the national question in Scotland, Breaking up the British State is pertinent and timely.

Murray Armstrong is author of ‘The Fight for Scottish Democracy: Rebellion and Reform in 1820’ (Pluto, 2020).