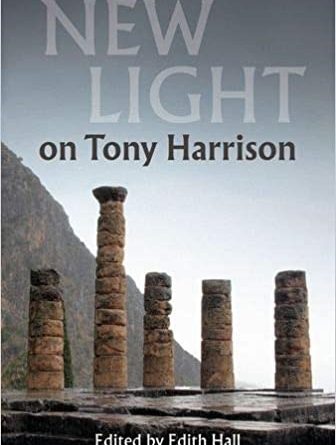 Edith Hall is at the heart of two books about the aesthetics of resistance in the work of the poet, Tony Harrison, writing one of them and editing the other. Classicists are not renowned for their left-wing politics but Hall is admirably different, making her ideally placed to appreciate the unique blend of socialist materialism and classical learning that fuels the dynamism of Harrison’s verse.

The seventeen essays and one poem in New Light originate from a conference Hall convened to commemorate Harrison’s eightieth birthday in 2017. The contributors are a diverse crew from academia, the arts, journalism and media professionals. Hall divides their contributions into different areas of Harrison’s oeuvre: his poems, work for the theatre, his immersion in the literatures of France and Italy, and his film poetry. Their essays combine to form a remarkable celebration of the integrity, depth, learning, intelligence and politics of Britain’s most important living poet: the bard of Leeds.

Harrison’s School of Eloquence sequence of poems and one called ‘V’ provide an accessible introduction to his combative style and its origins in a historically-specific family background, one he pinpointed in an interview: ‘I came from a loving, rooted upbringing which was disrupted by Education and Poetry. And I’ve been trying to create new wholes out of that disruption ever since’. As a working-class scholarship schoolboy in the 1950s, his Yorkshire pronunciation of a Keats poem earned rebuke from an English teacher: ‘Poetry’s the speech of kings. You’re one of those Shakespeare gives the comic bits to: prose!’

Defiance in the face of such claims on the ownership of culture constitute Harrison’s political act. Given the sophisticated codes and traditions of literary culture, the challenge is to give voice to those excluded by these codes. Harrison has spoken of finding inspiration in the republican Milton whose ‘sonnets range from the directly outward to the tenderly inward, and how the public address of the one makes a clearing for the shared privacy of the other’.

The blending of the private and public finds expression in poems of loss and regret alongside rueful reflections on class conflict. Allied to this is Harrison’s receptivity to other arts forms like photography, theatre and film and what literary critics call ‘heteroglossia’, a hybrid of different voices or languages within a text so that no single utterance takes priority. 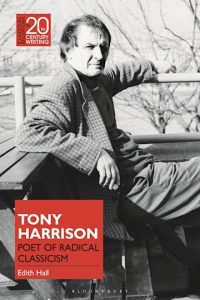 A photograph of an Iraqi soldier’s charred body in the first Gulf War provoked Harrison’s writing of ‘A Cold Coming’ and this interest in the visual arts helps explain his move into making film poetry. Peter Symes directed eight of Harrison’s films and his illuminating essay provides a window into how their close collaboration produced a rich artistic chemistry: ‘the [filmic] image as metaphor, the word as hard fact’. In The Blasphemer’s Banquet, they decided on a tracking shot and Harrison walked with the crew, beating out time to give them a rhythm and him a sense of how many quatrains were needed. The result is one of the film’s core messages about how life’s transience and our fear of meaninglessness can feed a habit for ‘the opium of the people’ – if Marx hadn’t created the image, Harrison surely would have – with fixes supplied by dealers (the ‘one-book creeds’) proffering ‘the unblemished beautiful in the untrue’. Another essay, by Henry Stead, convincingly links the film-poems with the cinematic montage of early Soviet film-makers like Eisenstein, the GPO film Night Train and Tarkovsky’s Mirror (1975).
Hall’s own book is as engaging and erudite, looking at Harrison’s use of Greek and Roman material to give voice to the oppressed and the injustices perpetrated by hierarchies of class, race and gender. Educated as a classicist, Harrison’s years of teaching and travelling in Africa and Latin America extended his learning to an awareness of colonialism and the global south and poems like ‘Newcastle is Peru’ (1996) gave early expression to his internationalist allegiances.

Her study begins by connecting features of his poetry with the epigrams of Palladas, the Hellenistic poet whom he translated early in his career. She moves on to Harrison’s decade-long creative relationship with the National Theatre that resulted in masterpieces like Oresteia. Its feminist inflection and colloquial language infuriated conservative critics: ‘unease with his class politics masqueraded as aesthetic derision. The real problem was … Olympian gods and the Argive Royal Family sounded like dockers from Hull’ Hall observed. Similarly, the use of profanities in the television broadcast of his ‘V’ became an excuse for attacking his class position.

The book concludes with the 1990s’ film-poems and his late poems, including the autobiographical elegy ‘Polygons’ (2015) which, as Hall says, provides the culmination to poems like ‘Newcastle is Peru’. Harrison’s wicked use of diction and rhyme in confronting urgent social, political and existential concerns blend dizzyingly to form an aesthetic of resistance that has no equal. Videos of some of his work are easily found online and print editions of his poems, plays and film poetry confirm the scale and depth of an achievement that puts him up there with Blake and Shelley. Like their poetry, his too is an antidote to indifference and as public as it is political.