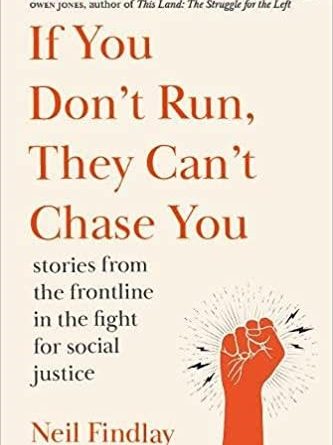 October 2021 marked the third anniversary of the historic 48-hour strike for equal pay by 8,000, mainly female, Glasgow council workers, members of UNISON and the GMB. Amongst those who responded to the strikers’ call for solidarity were the male cleansing workers at Polmadie and Dawsholm Recycling Depots who came out ‘illegally’ in their support. On the Dawsholm picket line of the second day of the strike, the scent of victory was in the air. One woman, a home carer, said that she had even been phoned by a relative in Australia to say that their strike – the biggest equal pay strike ever – had been reported there on the national news. ‘We’re making history’, she proudly announced. This is an example of the kind of accounts of struggle contained in this powerful collection edited by Neil Findlay, providing examples of what the media calls ‘ordinary people’ making history by challenging injustice and oppression.

Their stories range from the most intimate and personal to involvement in some of the biggest national and international struggles of recent decades. Those of the former include the death of a son at the Hillsborough Stadium on 15 April 1989, one of the ninety-six Liverpool fans who died that day; the loss of a much-loved brother as a result of corporate manslaughter; and the horrific story of the women whose lives have been devastated by transvaginal mesh, inserted by medical professionals supposedly to cure incontinence. On the bigger scale is Terry Renshaw’s account of his experience as one of the Shrewsbury 24, rank-and-file building workers in the early 1970s who were jailed and blacklisted for decades for fighting to improve safety conditions on building sites; chapters detailing life on the frontline during the Great Miners’ Strike of 1984-1985; and accounts of building solidarity in the struggle to end apartheid in South Africa and in the fight against the Pinochet dictatorship in Chile. Yet despite the very varied range of experiences discussed in the book, some common themes emerge.

One is just how little value the ruling class – the employers and the state – places on the lives and well-being of working-class people. Whether it be workers forced to work in highly dangerous conditions as building workers were in the 1970s (as nurses, social care and transport workers have been during the current pandemic), or the housing of poor people and migrants in high-rise buildings like Grenfell Tower that are little more than firetraps, nothing can be allowed to stand in the way of maximising profits.

A related theme is the brutality of the state and the bosses towards those who seek to challenge their power. In his chapter on working as a union activist in the building industry in the 1980s and 1990s, Dave Smith discusses the employers’ decades-long blacklisting of union activists as a means of ensuring that workplaces remain unorganised: ‘A pattern emerged: pretty much any time I raised health and safety concerns or site conditions, I’d be sacked. It was as simple as that’. As a result, countless lives and relationships were destroyed as activists struggled to find work, pay the bills and bring up families.

Even more shocking is the account of female activist, Andrea, of being a victim of what she accurately describes as ‘state-sanctioned rape’ when she found years later that a man whom she loved and had been in a long-term relationship with was, in fact, an undercover cop, placed there by senior police officers to report on the campaigns that Andrea was involved in. As we now know, Andrea was far from alone in being a victim of ‘spy cops’.

But the overall message of the book is a positive one. For what these individual stories show is that where the experience of personal loss, oppression and injustice can be channelled into collective organisation and action, then the anger and grief can be a force for challenging the system. And in the process of fighting back, people themselves are changed in ways they never expected. For Louise Adamson, campaigning to hold employers to account for corporate manslaughter following the death of her brother, ‘’Progress is made by collective action. That’s how you bring about change’ while for Dave Smith, the lesson of the struggle against the blacklist is: ‘Social change comes from below, not from handing over power to any politician’. It’s a lesson that is particularly relevant today when we face the triple crisis of climate change, the Covid pandemic and an economic system that will see millions of families this winter forced to choose between food and heating.

Iain Ferguson is emeritus professor of social work at the University of the West of Scotland and co-editor of ‘People Before Profit: The Future of Social Care in Scotland’ available from https://www.calton-books.co.uk/books/people-before-profit-the-future-of-social-care-in-scotland/

Scottish Labour must take its head out of the sand