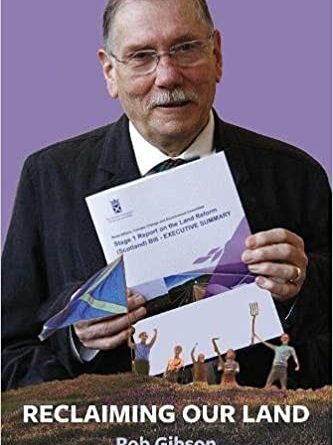 This is a book about land reform, providing through it a valuable resource for those looking to better understand the history of the SNP and those interested in parliamentary process. Gibson, with a long history in the SNP, was MSP for the Highlands and Islands Region for two parliamentary terms with constituency MSP for Caithness, Sutherland, and Ross following, before retiring in 2016. As a senior backbencher, a longstanding contributor to SNP land policy, and with convenorship of the Rural Affairs Climate Change and Environment Committee, there is a wealth of experience here for discussing land reform under the SNP government.

In many cases, Reclaiming our Land can be considered a defence of the SNP government’s progress on land reform and offers explanation on perceived lack of progress for many on the left in terms of both dealing with the challenges of getting land reform legislation through Parliament and facing down landed interests looking to diminish progress. Reclaiming our Land is introduced as a deliberate non-academic approach to telling Gibson’s personal story. There are a wide range of subjects incorporated into the book and it sets out to explore issues wrapped up under the banner of land reform as well as the parliamentary processes to progressing land reform legislation in the Scottish Parliament.

The first five chapters are given over to land reform history and progress over fifty years from the 1960s through to 2011. These chapters encompass Gibson’s own personal story of political development with a focus on land reform including reference to membership of the ’79 Group, but refreshingly not dramatic scenes and suspensions, more the logistical difficulties of accessing debate with other radicals in the Highlands in the pre-internet age.

Of particular interest is mention of his authorship of the party’s 1977 land policy containing suggestions of a two-tier land commission and what appears to be suggestion of a public interest test which, having made into the 2021 SNP manifesto, Green party manifesto, and now shared policy programme, should make it into a new land reform bill in this parliamentary term.

Although following a linear timeline, various chapters diverge into specific land reform issues, in the case of chapter six on deer impacts across Scotland. Much of the, arguably central belt focussed, Scottish left now view land reform through the prism of grouse moor reform, which although an important issue, is much to the detriment of wider debate. This focus on deer is welcome relief.

Various chapters deal with other aspects of land reform, or in chapter eight marine reform, which allows the casual reader to easily find points of interest. Tenant farmers, human rights, and urban land reform are all included and are incorporated back into the timeline of Gibson’s parliamentary career.   Evidence of this are the numerous extracts from parliamentary speeches, news articles, parliamentary research briefings and more. One of which, a speech at Community Land Scotland’s annual conference, encompasses two issues of personal interest: ‘Far from being wild land, I call it Clearances Country’ in response to the 2014 Scottish Natural Heritage’s ‘Wild Land Map’ and ‘local people describe themselves as the most endangered species’ regarding depopulation in the Far North, both as pertinent today in 2021 as they were in 2015.

In reference to other work and, at times, detractors (including those from his own party), Gibson outlines why process cannot match the speed of progress others aspire to. There’s a rebuttal of the ‘rebellion’ at the 2015 SNP conference, although I would have liked to have seen more on internal party politics, and voices on the Scottish left critical of SNP land reform policy. Gibson’s frustration is often apparent, and no one is safe from his attempts at refutation. The prominent voices of Lesley Riddoch and Gerry Hassan are highlighted in the book as failing to identify EU transparency registration as ‘beyond the power of the Scottish parliament’ and ‘crucially … unworkable’. Andy Wightman’s research skills and publications are praised, and Gibson recognises his impatience, yet picks up frequently on areas where he feels progress made by the minority government had been ignored. There is a brief and humble respite from defence in recognition that Wightman’s claims were a ‘black mark against any government no matter what the political and economic circumstances’.

Reference to Wightman’s ‘polemic style which takes no prisoners’ suggests that this approach, shared by many left commentators, may be at odds with the fundamental message of the book, that delivering on land reform in the Scottish Parliament has proven to be laborious work fraught with difficulty that can only be understood with experience of trying to deliver land reform via the devolved settlement and, ultimately, ‘Holyrood politicians should be recognised for being as radical as was practical’. Gibson is clearly happy with his achievements and sets out to defend them. It is also clear that land reform in Scotland would be in a poorer place without the work of Rob Gibson.