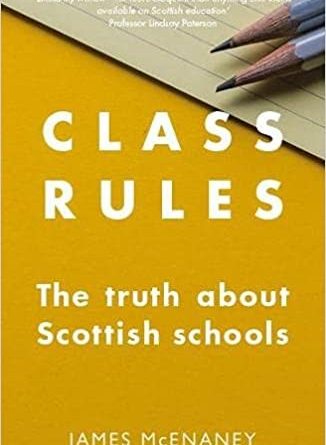 Class Rules is an engaging tour through Scotland’s contemporary education landscape. It maps out some of key issues in Scottish schools in the early twenty-first century and is recommended for those who wish an up-to-the-minute, broadly-based critique of Scottish education focusing on Curriculum for Excellence, examination results and the impact of the pandemic.

Over the course of its chapters, McEnaney aims to cut ‘through the endless political grandstanding, media misrepresentations, impenetrable statistical releases and pernicious class-based assumptions that obscure so much of Scottish education’. He fulfils almost all these aims with a comprehensive analysis of teachers’ concerns with the implementation of Curriculum for Excellence, the decline in quality of education data and an expose of the shockingly poor response of the SQA – and by association Scottish Government – with its alternative certification model utilised during the pandemic for national awards. In addition, his journalistic investigative work in accessing necessary information and data not readily in the public domain continues to shine the light on the lack of transparency and openness within the civil service in Scottish Government as well. Across the book, the writer’s discussion about education and social class, leads to his wish for radical transformative (even revolutionary) change for Scottish education.

In terms of the book’s key aims, McEnaney does not miss in his attack on political grandstanding. He skewers both Nicola Sturgeon and John Swinney, the latter for his series of failures in thwarted legislation and mismanagement of certification arrangements during the pandemic. The former’s ‘I want to be judged on this’ speech at Wester Hailes Education Centre in August 2015 is criticised as an entirely and transparently cynical manoeuvre dressed up as political accountability. In his view, the introduction of national standardised testing at various stages from primary one year (P1) led Scottish education into a poisonous conflict played out across the media and the debating chambers across Scotland.

He brings a great deal of clarity to the degraded, if not corrupted, quality of statistical data issued by the Learning Directorate of Scottish Government. In a fascinating chapter, he manages very successfully to make sense of a wide range of assessment and exam data. Taking this evidence, he questions the whole notion of closing the attainment gap as a policy aim. The hope would be that his excellent work can lead to a debate around quality of statistics that seek to measure the outcomes of Scottish schools.

The chapter on Scotland’s Curriculum for Excellence is, perhaps, less successful in indicating a route towards transformative change. In discussing and raising the concerns of teachers in secondary schools with its implementation, this chapter damns Curriculum for Excellence’s faults in all their glory yet too often fails to identify its strengths fully. Within the chapter, it does read as if the Scottish curriculum, in secondary schools in particular, should return to a fragmented sectorally-structured, academic knowledge-based curriculum. This would be accomplished by a managerial approach with further levels of specialist promoted posts in secondary schools. The chapter does not include much of strengths and outstanding practice in implementing Curriculum for Excellence in primary schools where teachers felt more able to make progress in engaging with children to gain their capacities while also working attentively with numeracy, literacy and health and well-being. In part, the idea is reinforced that the broad general education only occurs in secondary years one to three (S1-3) and partly accounts for problems with Curriculum for Excellence. James offers the notion of mixed-age provision at early years. This is a recipe for transformative change for ineffective structures in S3-5 too.

The class-based assumptions that underpin Scottish education are identified throughout the book though a more coherent analysis within a chapter of its own going beyond ‘closing the attainment gap’ may have better served many of the points made across the text. James does say that limits to its length prevented the text giving a further analysis of social and cultural injustices within Scottish education. In this context, it is a regret that he did not explain the social injustice promoted through setting by ability, still a very common practice within Scottish schools.

Before advising you to rush out and buy this book, it’s fun to record the irony of the future Freedom of Information (FOI) hunter extraordinaire following the advice of his early mentor in regard to requests for paperwork: ’Almost all paperwork should be ignored the first time it appears – if it actually matters someone will ask for it a second time.’ Perhaps the governing authorities pursued by Mr McEnaney maybe need more than one request?

In concluding, he comes round to agree with Basil Bernstein’s statement from 1970s: ‘Education cannot compensate for society’. McEnaney’s neat summation being that ‘injustice in, equals injustice out.’ More recently educators, such as Michael Apple, from a democratic socialist position reset the argument as a question as ‘Can education change society?’ In England, the question is posed by Diane Reay as ‘what would a socially just education systems look like?’ McEnaney ‘s major strengths are that not only does he broadly critique the failings of Scottish education in the early twenty-first century for her also begins to identify practices that can be part of transformative change towards a more socially just education system for Scotland.

David Watt is Secretary of the Socialist Educational Association Scotland. Further information is on the SEAS blog https://seascotland.blog

Stalled and stymied? The right to informed democracy in Scotland