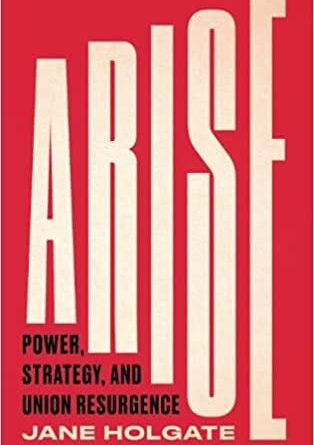 Holgate charts the historical rise and fall of union power but this is no dry or dreary account of the past. The book is structured to build bridges between the new unionisms of the 1880s and the situation facing the UK union movement today. A rich narrative using short case studies to illustrate points brings the book to life.

The 1970s are used as the point around which the story of union growth and decline pivots but, from the outset it is obvious that wistful nostalgia will be avoided. Within the first three pages, the scene is set by quoting the then controversial essay published in 1978 by Marxist historian, Eric Hobsbawm and called ‘The forward march of labour halted?’. That analysis of 40 years ago suggested that the British labour movement was already failing to respond to the changing structure of British capitalism. The book does not bludgeon the reader but puts the zenith of union membership in its historical context and questions whether high levels of membership equated with actual power. The point is clear that looking back at a period regarded by some as the halcyon days of union power, key elements of state and employer counter-mobilisation were already in train. Whether you are a union and community activist, a union ‘leader’, or a scholar of industrial relations, in other words if you have any interest in trade unions, this is a book for you.

The book covers a lot of ground but, as already suggested, its central thread is a discussion of union power, a phrase in common usage but often with little thought about the expression’s meaning. Helpfully, Arise breaks down the concept into the different types of power available to workers, providing examples by interlacing them in case study accounts. In so doing, Holgate provides a practical check-list for understanding the power resources that are available to us in different contexts.

The battles of the 1980s are dealt with deftly, managing to avoid both the traps of sentimentality and being clever in hindsight. The point made is obvious but worth restating: Employers and the state are not submissive recipients of union mobilisation, they learn from previous battles and, perhaps, there’s been an over-reliance by unions on old tactics and manoeuvres that the other side are wise to. In dealing with shifts to the composition of the working-class, Holgate takes a conscious choice to incorporate the struggles of women and ethnic minority workers and issues of precarity as a core part of the movement’s history, dispensing with the temporal parochialism that pervades many contemporary accounts of these issues.

Essentially, Arise takes Hobsbawm’s question and suggests that the reasoning still holds true today. Despite the turn to organising by UK unions from the mid-1990s, unions are still failing to respond to structural changes in political economy. Holgate’s evaluation is nuanced, noting that the introduction of organising techniques were important in slowing the decline membership rates but asks if union leaders were really signed-up to ‘a strategic review of where power lies and how it can be (re-) created.’, arguing that, in many cases, the approach was organising in theory but recruitment in practice.

Now to the picky points. Unsurprisingly, it is natural that the strategic choices made by unions and the role of leaders are questioned. Holgate’s account is certainly not a diatribe against union leadership and takes care to acknowledge the complexities of internal union governance. However, the general conclusion gets close to blaming one set of actors (‘full-time officers’) for poor decisions and there are a couple too many references to the oligarchic tendencies of union leadership. Now, given the job I do, it would be easy to assign any difficulty I have with this reasoning to defensiveness and self-interest but the conclusion is too easy and has a shaky evidential base. The analysis is a bit too crude and does not fit with larger (admittedly old) and focussed empirical studies of union officials.

The other minor gripes I have about the book also say more about my current predilections than the publication. One concerns the use of ‘class’. The term is used more as a rhetorical device and rallying cry than an analytical category; the other is that, on first reading, I thought it may have been useful to be clearer about the contextual differences and similarities between the period of Victorian new unionism and today. I would not be surprised to revise my views on a second reading and so, these minor points aside, Arise has done what it should, caused me to reflect.

Although an academic of some standing, Holgate is no passive observer. Years of activity in the field mean her style leaves you in no doubt whose side she is on. It does not shy away from the knotty questions about the prospects for union resurgence and future forms of workers’ collectivisation but, mercifully, she is much too modest to join the ranks of commentators who think there is one clear way (theirs) to build union power, regardless of context. Instead, she notes: ‘Workers have always fought injustice and will continue to do so’ but, while careful not to predict the exact organisational form, notes that unions should be capable of adapting and equipping workers with the political education to realise their collective power. This book is a great read and would be a valuable contribution to anyone wanting to resurrect the tradition of political education courses within unions.