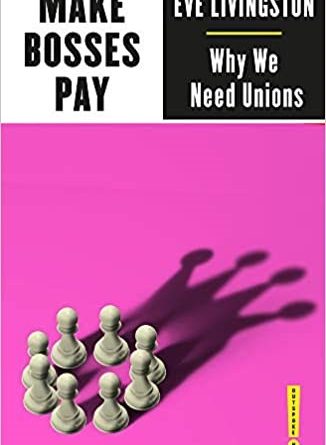 For some, there is a rare feeling of positivity in the union movement at the moment, as unions prepare to take strike action in Glasgow and beyond, and with a wave of encouraging personnel changes in the senior ranks of some of Scotland and Britain’s biggest unions. Supporting this feeling of rejuvenation in the labour movement have been some important publications and Eve Livingston’s Make Bosses Pay: Why We Need Unions is a significant contribution to recent literature on the continued relevance of unions.

Part of Pluto’s Outspoken series platforming ‘underrepresented voices, intervening in important political issues, revealing powerful histories and giving voice to our experiences’, Make Bosses Pay is aimed at a younger readership but is a thorough, compelling and highly relevant book. Livingston makes the case for why workers of all ages – especially the young – should join unions and get active, offering a clear and persuasive analysis of the imbalance between capital and labour within our economy that demands union action. Seasoned trade unionists would do well to pick this book up and take advice on where efforts can be focused to adapt unions to the economic and societal shifts in the age of digitisation, international mega-corporations, ‘gig economy’ and environmental challenge.

The book refreshingly includes a wide range of views from activists in low paid precarious work to senior union leaders and academics, exploring key conceptual debates around the role of the unions such as the ‘servicing vs organising’ models (building on the work of Jane McAlevey and others who promote unions’ role in ‘deep organising’) and ‘liberatory unionism’ which puts marginalised or underrepresented workers at the centre of their work. As with the decline in union power over the past decades, so there has been a decline in journalism dedicated to the labour movement and, while this young award-winning Scottish writer has a broad portfolio, Livingston makes a vital contribution to the often-wanting coverage of union politics and industrial relations.

Make Bosses Pay is an accessible but comprehensive introduction into the vital role of unions in today’s world, providing an instructive run through the political and historical theory underpinning the movement and offering practical examples and insight (using case studies into effective modern organising examples such as Better Than Zero and Unite Hospitality). This book should be read widely by activists young or old, experienced or up-and-coming and those with a casual interest in how joining your union is the key to rebalancing an economy tilted in favour of your boss.

John Wood works in the public sector and for many years has supported Scottish Left Review by voluntarily proofing its contents before publication.