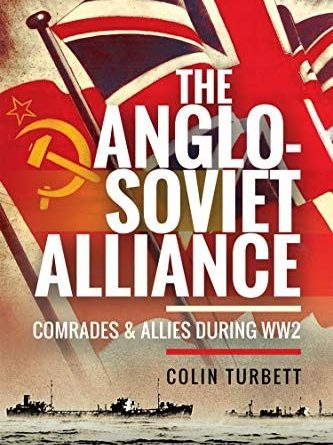 Reviewed by Michael A MacLeod

As a schoolboy, I interviewed an uncle for a school project regarding WW2. There, I heard first hand of the Arctic Convoys where my uncle had served as bosun on a Merchant Navy rescue ship during one of the many convoys from Britain to Russia. With this in mind I picked up Colin Turbett’s book looking to learn more about the Arctic convoys and especially how they were viewed from the Soviet side. That a whole chapter was dedicated to these convoys shows just how important they were.

Weaving into the narrative three distinct strands, actions of the states, British political parties and those of the ordinary people in the street, trenches or onboard ship, Turbett manages to present a precise overview of events whilst zooming in to pepper the story with individual episodes of comradeship. Beginning with an overview of the inter-war period and how relations between the Soviets and British had developed, he demonstrates that despite ideological differences between the two states there was a growing awareness in Britain that Germany was the biggest threat and as unpalatable as it was too many within the British Establishment an alliance with the USSR was going to be necessary.

If the Communist Party of Great Britain (CPGB) was an acrobat, it would have been gracing the Bolshoi circus such was the manoeuvring and outright volte-faces it performed during WW2. Turbett highlights how the CPGB morphed overnight from declaring the war a battle for supremacy between capitalist nations to full throated support for war following Germany’s attack on Russia. Examples of the different campaigns undertaken are provided to show how ordinary people responded to the call to support the USSR. Tours by Soviet war heroes such as that of sniper, Ludmilla Pavlichenkco, were met by enthusiastic crowds and massive fundraising was undertaken.

Cooperation between respective armed forces is studied, showing that on the occasions that such actions took place they generally worked well although as war concluded any joint effort met with increasing suspicion by those on either side. The firebombing of Dresden is cited as an example of the British and the US military flexing their muscles to intimidate the USSR.

I highly recommend this book to those wishing to better understand how the British and Soviets worked together during WW2 despite their ideological differences. That the British workers took so quickly to their Soviet comrades worried many within the British establishment and it was only as the Allies seemed set for victory that the suspicion and fear that would come to dominate the coming years appeared. This book helps dispel the Cold War fog which has distorted this reality for decades.