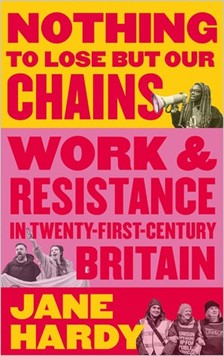 If there’s a central theme in this book, it is optimism. Drawing on both secondary data analysis and interviews with activists from across the union movement and beyond, the book provides a rich portrayal of the transformation of our workplaces, economy, urban landscape and society (much of it depressing) but also, thankfully highlights ‘successful struggles in a dismal period for trade unions, where the tenacity and resilience of some groups of workers have shown is humbling’ (p11).

The first part is given to debunking a number of dubious narratives about contemporary work and resistance. Hardy pithily deconstructs many of the policy discourses (surrounding for example the gig economy, future of work, precarity and their supposed novelty) and propaganda exercises of neo-liberal governments. Some such narratives are plainly ideological, while others which have been overstated by some academics, who might be seen as more interested in their own status that than of working people, or in truth. In any event, the effect of many of these unchecked narratives is to contribute to making us believe that the challenges of neo-liberal capitalism are all but insurmountable. This kind of debunking is important. The detail in some sections counterposing numbers with dominant discourses provides a useful reference point for academic readers underpinning their own research or teaching, and activists looking for ammunition to take on employers and policy makers alike. Despite the key problematic – how to reverse union decline and the deterioration of work – now being a perennial feature of industrial relations scholarship for many decades out in the cold now, this opening section manages to feel fresh, urgent and hopeful.

Hardy has a flair for the symbolic, poetic and ironic in the imagery and she uses, often juxtaposing of wealth and deprivation, such as by contrasting the localities of Tower Hamlets and Canary Wharf, next-door neighbours that are a world apart in terms of working lives and income. Her opening chapter sets the scene, surrounding her institutional setting of the University of Hertfordshire. The enormous Hatfield British Aerospace plant once located here, providing highly skilled and well paid work at the heart of its community, has been fractured into a tiny pieces: a university, built under the private finance initiative, a David Lloyd leisure complex, a huge hub of distribution, logistics and warehouses for fulfilment and dispense, mass ‘cheap’ (but not necessarily affordable) housing for students and migrant workers provides an evocative illustration of many of the tragedies and sometimes ironies of the fissured workplace and the glossy glass-fronted workplaces that are so often sites of growing pay disparity between the upper lower echelons- a disparity that as Hardy shows us, is vividly portrayed by the contrasting conditions of cleaners in large cities, often working unsocial hours in the offices of financial services giants and university managements on inflated salaries. This complex reflects the neo-liberal instinct to carve, contract, sell, privatise, divest, franchise and contractually-distance. Hardy’s portrait is evocative and all too familiar, for as she puts it, such evolution is ‘emblematic of the restructuring of the British economy’ (p3). There is, she tells us: ‘nothing unique about changes to the local economy and work in Hatfield; the towns, cities and regions or Britain have all undergone transformations. The only differences are the timescale and the details’ (p3).

From this vantage, Hardy outlines some of the most important and exemplary struggles that challenge the narrative that there ‘is no alternative’ to neo-liberal policies. She draws on several notable examples of organising in adversity that while off the radar of mainstream media are probably known to most on the left, albeit, the case studies she provides are enthralling and, to this reader, balanced accounts. Chapters on the hidden histories of migrant workers as well as the details of sub-contracted cleaners’, the Glasgow and Birmingham women’s inspiring victories on equal pay are particularly riveting contributions, illuminating less well-known elements of working class and union history in Britain. Hardy’s investigation takes in many regions, including Scotland, which can be neglected in British industrial relations texts of this kind.

The book will no doubt be a provocation to unions, particularly the larger ones in terms of managing their bureaucracies, and the tensions between rank-and-file and the officialdom. Hardy’s righteous anger against the capitulation of the previous UCU leadership is clearly stated and reverberates in discussions of other hierarchical tensions. This extends to missed opportunities like at Sport Direct warehouse where the ‘vacillating’ support of UNITE is described as a key factor in the failure to sustain an organising campaign. Hardy urges that workers join when unions take action.

Particularly in its opening chapters, this book is beautifully crafted, multi-faceted, bold and hopeful but, in terms of a few minor quibbles, it is also a little uneven in the level of detail and theoretical analysis it offers. In some sections, the level of detail of the data can feel a little overwhelming, whereas in other places, interesting arguments are stated without details or references to follow up. The introduction sets up the expectation of a highly theoretically informed piece. The case studies for all their insights deliver less on this front. The conclusion might have developed some of the many interesting themes further. Hardy wishes to resist avoid a mechanical tool-kit for activists, noting some respectful criticism of Jane McAlevey’s popular organising manuals. Hardy very briefly extols the virtues of socialism in terms of going beyond even radical trade unionism, and suggesting a political-economy of alternative values. A fuller airing of this analysis and its logical extension might have added a further layer of insight and offered activists clearer ideas for how to bolster their campaigns.

Ultimately, with the urgency in the present moment of a dramatic change of direction, given the ‘looming environmental disaster,’ the ‘dire consequences’ of which ‘cannot be averted without a complete reorganisation of society and changed priorities’ (p217), we might forgive Hardy these minor limitations. At a time in which we need courage to take bold action to address a host of grievances, rooted in an entire political economy of neo-liberalism, there is a sense that the ‘unprecedented’ times of the pandemic present a brief historic moment for action. Recalling the titular theme of the book, the concluding chapter highlights a point made an unnamed worker Hardy interviewed; that ‘if we organise and fight back there is no guarantee that we will win, but for sure, if we don’t, we will lose- that is the only thing that is certain’ (pp216-217). Hardy’s aim, successfully achieved, promotes action rather than pontification.

Eleanor Kirk is a researcher, based at the University of Glasgow School of Law, and a UCU member.