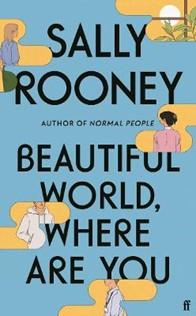 Sally Rooney Beautiful World, Where Are You? Faber & Faber, 2021

Rooney’s Beautiful World, Where Are You? was hotly anticipated by critics and by her broad fanbase after the acclaim and mainstream commercial success – aided by the popular and captivating BBC3 adaptation of her second novel, Normal People – of her earlier work. Much like her first novel, Conversations With Friends (TV adaptation in production), this latest one focuses on what might be described as a ‘love quadrangle’ between four young Irish people finding their way uncomfortably into adult life. Alice, a young writer dealing with the burden of early success, and her close friend Eileen, enjoying a low-profile life working in a publishing house in Dublin, are the two lead protagonists, each with complex relationships to two very different men, Felix and Simon.

With many critics apparently lining up to find fault in Rooney’s writing even before publication, Beautiful World, Where Are You? may have faced a difficult entry to the world but any reader (and judging by sales there are many) will take pleasure in immersing themselves in Rooney’s characters and begin to care deeply about their various (mis)fortunes. Each main character reflects Rooney’s sharp wit, contemplating deeply the state of the modern world and what it means for social relations among those born into it. Relevant or not, Rooney’s self-proclaimed Marxist analysis is the subject of much ill-informed debate, not to mention the root of some tabloid nonsense the author has been subjected to (‘How Sally Rooney loaded bestselling books with communist ideas’ ran the Daily Mail). But it is undeniably refreshing for a novel to take such deep exploration of politics, sex and society in its stride and continue to be so readable.

As with lead character, Alice, Rooney’s talent is, perhaps, the real cause of irritation among some critics. Her depiction of young male characters is once again extremely impressive: something this nearly-young male reader can particularly appreciate. This skill gave us Normal People’s Connell whose unlikely heartthrob status was put beyond doubt by Paul Mescal’s charming BBC3 performance. And, the book expertly incorporates social media and email in a way many writers often struggle to deliver without clunk.

‘I think of the twentieth century as one long question, and in the end we got the answer wrong. Aren’t we unfortunate babies to be born when the world ended? After that there was no chance for the planet, and no chance for us? Or maybe it was just the end of one civilisation …’ writes Alice in one of her intimate emails to Eileen.

Three books in, a trademark type of ‘Sally Rooney character’ has begun to emerge but this won’t be a problem to those who enjoyed Rooney’s previous offerings and who wish to enjoy more of the same. What feels like light reading will take you along with these troubled young intellectuals to profound places pondering the state of our beautiful world.

Overheated and over here: our planet on fire