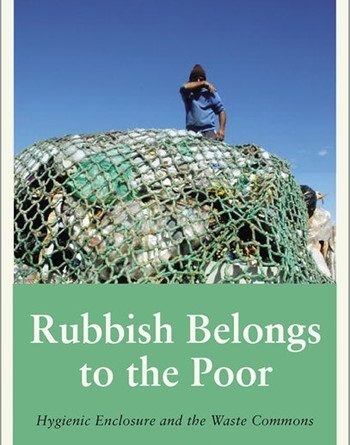 Whether from an environmental or geopolitical perspectives, waste management is on the political agenda in 2022. O’Hare – a young and influential activist academic – takes the reader on an impressive journey through the politics and notions of waste as a ‘commons’ through the stories of Uruguayan waste pickers called clasificarodes.

Within his academic discipline of social anthropology, O’Hare proposes a new conception of waste as commons, exploring how waste management ties in with broader anti-capitalist debates on dispossession, class power, sustainability and how the developed world perceives and deals with its waste. Within a turbo-charged capitalist system, access to waste commons is often denied to the poor by large waste management corporations and the (normally local) authorities responsible for waste services. This dynamic plays out at a local level with an impact on those who would make a living from waste commons as well as at a global level reflecting the relationship between the global north and south.

Grounding the book in his close experience of clasificadores in Uruguay, O’Hare – perhaps unusually for a social anthropologist – likes to roll his sleeves up and immerse himself in this community. Indeed, O’Hare’s affection for Uruguay and the communities who make a living from trawling landfill is an infectious bonus to this book.

While painting a vivid picture of reality on the waste heap, O’Hare traces the historical role of clasificadores as ‘lumpen-proletariat’ or ‘rag pickers’ in pre- and post-Marxist conceptions of the proletariat. Themes are explored such as the displacement of waste pickers serving to help racialise the working-class (as with treatment of Irish immigrants to Britain) which carries on today as both Afro-Uruguayan and white Uruguayan pickers are called los negros de la cantera (‘the blacks from the dump’).

Although the text has its roots in academic social anthropology, the book is accessible and engaging from the outset and traces of a Scottish perspective on a global subject are refreshing. O’Hare is from Glasgow and is based at the St Andrews university. Fundamentally, the power of this book is in its matching of theoretical discussions of waste as a commons with intimate accounts of life on the front line as a Uruguayan waste picker.

Any inquisitive reader unsure about what a book about waste-picking on the other side of the globe might hold will not only enjoy the socio-political themes explored within but will find that a sense of joy, humanity and appreciation shines through as O’Hare recounts his time spent embedded within this community who find themselves emblematic of capitalism’s ills.

John Wood works in the public sector and continues to support Scottish Left Review by voluntarily proofing its contents.

Overheated and over here: our planet on fire