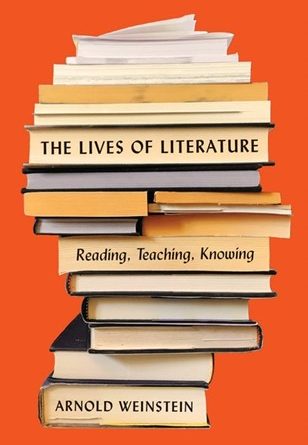 The Lives of Literature, a valediction by a retiring academic who taught at an Ivy League university for over fifty years,has a lot not going for it. Prone to platitudinizing, paternalistic at times and peppered with autobiographical snippets, it is irksomely old-fashioned in its approach to literature as a series of individual books deserving to be singled out for their exemplary insights into the human heart.

What saves the day is Arnold Weinstein’s conviction that literature seriously matters and that the serious reader is like the character in William Faulkner’s Go Down Moses who has to track the footprints of a fleeing bear before it can be seen. Faulkner’s novels do not make for easy reading – ‘a Hieronymus Bosch of prose’, as one critic put it – but Weinstein makes a strong case for tracking their convoluted contours in order to bring to light the ethical rot of the antebellum South and its racial poison that has not been eradicated. Growing up in Memphis, the author remembers seeing Confederate statues every day but ‘we white youngsters rarely thought twice about them’.

Though no mention is made of Faulkner’s suspect personal politics, a moral imperative is traced in his novels and it connects with Weinstein’s reading of Kafka’s ‘Metamorphosis’, the tale of a man who finds himself transformed into a giant insect. The man never tries to make sense of his plight but the reader learns what it looks and feels like to be cast out, not recognized as human by his own family: ‘the abyss between life’s monstrous events and reason’s pitiless procedures’.

Weinstein quixotically ignores literary/cultural theory on the grounds that it is ‘too much a head-game’ and while this protects him from jumping on hip-proclaiming bandwagons, it also allows him to reduce literature to a set of his personal favourites. His range is a wide one – from Baudelaire and Proust to Strindberg, Joyce and many others– and readers will be drawn into wanting to read some of the books he discusses, even if disagreeing with his opinions.

He is strong when paraphrasing works of classic American literature, like those of Faulkner, Mark Twain, Emily Dickenson and Toni Morrison, but he risks straight-jacketing English writers in pursuance of the thesis that literature is centrally concerned with the difficulty/impossibility of knowing another person and the pain that often accompanies the act of knowing. Too much is sidestepped by his reading of Emily Bronte’s Wuthering Heights as a fiery love story about two people struggling to comprehend one another and using King Lear to illustrate the cost of knowledge is too baldly presented to take us very far. One wishes at times like these to present Weinstein with an old copy of Terry Eagleton’s Literary Theory or his latest book Critical Revolutionaries.

What emerges as deeply admirable about The Lives of Literature is the author’s humility in coming to acknowledge his shortcomings. Toni Morrison’s Beloved forces him to confront the raw experience of a black person living under slavery, as opposed to Faulkner’s white-man perspective that examines it in terms of ownership, dispossession, emotional entropy and cognitive torpor. Weinstein finds himself admitting that most of the issues he has previously discussed, ones of justice, love and empathy, seem by comparison ‘quaint, perhaps abstract, academic and elitist’.

A similar moment of enlightenment occurs when in 2017 he teaches Coetzee’s novel Disgrace. Thesexual abuse in the protagonist’s affair with his student some thirty years his junior incenses Weinstein’s own students and their indignation is not mollified by their teacher’s picture of a man in his fifties taking male privileges for granted. It would seem that Weinstein draws an inept parallel with the event in the novel when the teacher’s own daughter is raped by three black African men. A formal complaint is made about Weinstein’s teaching of the novel. In his account of this uncomfortable episode, what is sensed is the limitation of his liberal humanist approach to literature. Coetzee’s mapping of the female body’s subjection to violence onto the social landscape of post-apartheid South Africa is complex and finessed but the nature of this complexity was not communicated to Weinstein’s students.

The Lives of Literature will not shake the foundations of literary criticism or memoir writing but it is to be warmly applauded for its sincerity and its insistence that particular works of literature can take readers on journeys of self-discovery that will become important parts of what it means to be a human being in a fallen world.