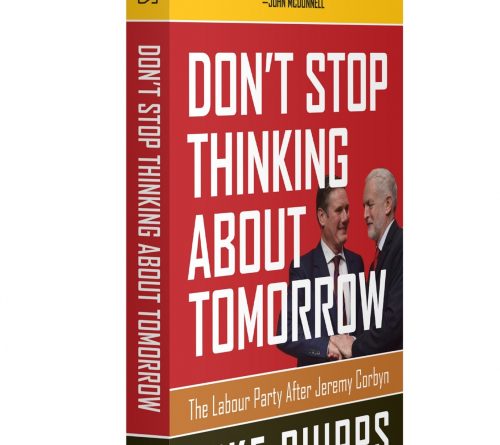 When the storm cleared after the 2019 general election, there was wreckage in its wake. Much of it now is the flotsam accounts of prominent individuals from the labour left, published as monographs, and often accusing former crewmates of negligence at sea. These works analyse what went wrong in 2019, and it is a shame that most contain more recriminations in their pages than lessons on what is now to be done.

Mike Phipps’ Don’t Stop Thinking About Tomorrow, marks something of a welcome departure from this genre. While reflecting on the Corbyn era, it is primarily focused on what has followed – two years of pandemic and Starmerism in the Labour Party. While Phipps’ effort might ultimately prove unsatisfying, it nonetheless marks an important bridge among works on the Labour Party. As the author argues, the time has long since passed for those within the Party to turn their focus to what is to come.

Across 200 pages, the work offers a chronological reprise of events within and without the Labour Party from the general election. It binds together internal Labour reports, articles and tweets lucidly, though at times it could be more assertive in its interpretation of events and in describing how the left might counter its recent misfortunes.

Don’t Stop Thinking About Tomorrow’s first chapter addresses the 2019 election directly. It highlights some mistakes which were made by the Labour leadership, but its conclusion appears to be that Labour was scuppered either way on the Brexit question, or else that it was the victim of more acute structural tensions within British society. Here, whatever the author’s own sympathies, he provides a relatively balanced and honest account of the difficulties faced by the Party going into the election; difficulties which are likely to continue unless the Party is able to change tack from its current course.

Chapter two considers how Keir Stamer won the Labour leadership and his subsequent attack on the left within the Party. Unfortunately, here the work becomes rather descriptive: an account of what has occurred rather than a productive analysis of it. By focusing on the plight of left-leaning members within the Party, the book neglects any detailed account of the right and its motivations. This is surely crucial if we are to understand how its grip on the Party is to be loosened.

In the third chapter, Phipps continues to analyse the Starmer era, but considers Labour’s future more directly. This includes charting routes through demographic challenges and the supposedly rough currents of patriotism and nationalism. For readers of Scottish Left Review,there’s a lack of substantive discussion on Scotland and the national question, though there are a few astute quotes from Tommy Kane and Stephen Low. Broadly, the work argues that only through a renewed focus on local ‘grassroots’ organising can Labour and the Labour left recover.

At its strongest, Don’t Stop Thinking About Tomorrow collates a variety of important ideas and developments within the Labour Party. It highlights that to begin any renewal, the Labour left and the Party itself must be prepared to do the hard work of building genuine community support. Phipps also succeeds in demonstrating that the Corbyn project and its legacy is evidence of the importance of organising through the Labour Party, not evidence of its futility. For socialists outside the Party, he makes a convincing case that the Labour Party must be understood as a terrain of struggle, not yet the vehicle for its advance. Whatever the Labour Party is, it is certainly not a signifier of moral integrity, to be boarded or to disembark when one agrees or disagrees with its leadership.

There are criticisms to be made of Phipps’ account too, though. In particular, the book maintains the idea that Labour’s membership is inherently sympathetic to the left of the Party. It cites members’ continuing support of much of the policy from the 2019 general election as evidence for this and seems to suggest that were it not for the right’s manipulation of supposedly democratic processes, Labour would naturally swing to a democratic socialist bearing. Much of the evidence of the Labour Party’s history does not suggest this. Without resorting to tedious quips of Methodism and Marxism, it seems clear that the Labour Party’s membership is composed of a great mixture of people. Some of these are socialists, some now ardent Blairites, but a great many appear to sway in time to rather vague appeals to hazy ideas of values and power. An underappreciated aspect of Jeremy Corbyn was that he offered a pallet cleanser to the indistinct Blairite politicians who surrounded him, now he has been swallowed by the party membership, perhaps we are returning to that fare.

In any case, Don’t Stop Thinking About Tomorrow does not make a course for the left or the Labour Party, but that it begins to think about such routes makes it a welcome shipmate on the journey.

Dexter Govan is a historian and writer of unionism and the left.