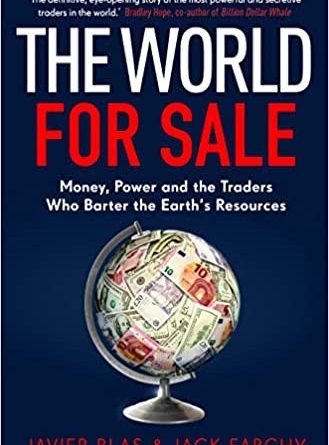 Reviewed by Will Podmore.

Blas and Farchy are journalists at Bloomberg News. Previously, they covered commodities for the Financial Times. They have produced a fascinating account, based on more than a hundred interviews with commodity traders, of those who profit hugely from exploiting those who produce the goods they buy and sell.

For example, they describe how ‘from 2004 to 2006, the Jamaican government would have received $370 million in additional revenue if it had been selling its alumina on the spot market and not Glencore. … Thanks to their unprecedented financial firepower and mastery of the commodity markets, traders such as Marc Rich were able to seize on the economic weakness of countries such as Jamaica’.

In the 1970s, traders assisted the countries of the Middle East sell their oil on the world’s market: ‘The nationalisation of Middle Eastern oilfields had cracked open the oligopolistic system that had been carefully built and nurtured by the Seven Sisters for decades. As OPEC nations seized control of their oil resources, they diverted the flow of petrodollars from the companies’ coffers to their own. Western countries began to worry about their dependence on Middle Eastern oil, a concern that would be a major driver of foreign policy for the next half century’. This brought about ‘one of the great geopolitical and economic revolutions of the modern era: the seizure of their natural resources by oil-rich nations, the rise of the petrodollar as a crucial element of international finance, and the rise of the petrostate as a force in global politics’.

The authors show how commodity traders have the power to affect the destiny of whole countries. Traders supplied the Libyan rebels with the oil without which they could not have overthrown Libya’s government. The head of Vitol, the company involved, said: ‘Obviously, I got permission from the Brits to go in’. The authors add: ‘In the UK, a covert ‘Oil Cell’ in the Foreign Office worked to prevent Gaddafi’s forces from obtaining fuel or selling crude internationally. Washington granted a sanctions waiver to allow US companies to buy Libyan oil from Vitol’. As the authors note: ‘Almost immediately, Vitol’s intervention shifted the balance of the war. Securing sufficient fuel had always been a crucial determinant of victory in North Africa’s empty stretches of desert’.

Earlier, at the other end of the continent, traders had helped South Africa’s apartheid regime to defy UN sanctions for decades. A trader like ‘Marc Rich was among those who didn’t have any qualms about dealing with anyone, including those under economic sanctions. ‘In an embargo, only the small people suffer … ‘We did business according to our own laws and not those of others’ said Eddie Egloff, a senior partner at Marc Rich + Co. As the authors note: ‘Without the traders, the economy of apartheid South Africa would almost certainly have collapsed many years earlier than it did. Chris Heunis, a South African minister, admitted that Pretoria had more difficulties buying oil than arms, and that the oil embargo ‘could have destroyed’ the apartheid regime’. Rich ‘made astronomical profits from subverting the oil embargo against apartheid South Africa in the 1980s’. Rich himself said: ‘The South Africans needed oil, and people were reluctant to sell it to them because of the embargo. We agreed to do it because we felt it was nothing illegal’. Similarly, ‘In Russia, the traders’ cash very directly flew in the face of Western policy, by helping Rosneft and Putin weather the impact of US and EU sanctions against them’.

Countries at different stages of development have very different needs for commodities. Rapid industrialisation and urbanisation drive what Blas and Farchy call commodity super-cycles: ‘The first modern commodity super-cycle, for example, was triggered by the industrial revolution in the nineteenth century in Europe and America; the second, by the global rearmament before the Second World War; the third, by the economic boom of the Pax Americana and the reconstruction of Europe and Japan in the late 1950s and early 1960s. The fourth began around the turn of the millennium, as China and other emerging economies entered the commodity sweet spot’.

In countries with annual income per head below $4,000, people spend most of their income on the basics: food, clothes, housing. These countries’ governments don’t have the money to make big investments in commodity-intensive public infrastructure like power plants and railways. Likewise, in countries with annual income per head above $18,000, people spend most of their income on services that need fewer commodities: education, health care, recreation, entertainment. These countries’ governments have usually built most of the infrastructure they need. So: ‘In between the two extremes, there’s a sweet spot for commodities demand. After per capita income rises above $4,000, countries typically industrialise and urbanise, creating a strong, and sometimes disproportionate, relationship between further economic growth and extra commodity demand. China hit the sweet spot … in 2001’. The traders exploit countries’ demands for commodities: ‘Even as the traders had accumulated unprecedented financial power, their activity remained almost entirely unregulated’. But the free movement of capital, on which the traders depend, undermines the conditions of its own existence, as shown by the crash of 2008-09, and the current slowdown of the world economy, which is paving the way to the next crisis.