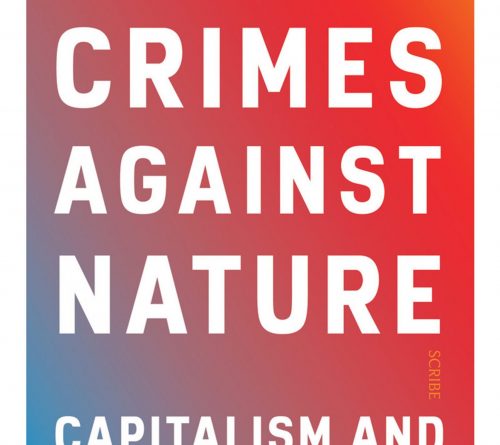 Jeff Sparrow is an Australian writer, broadcaster and journalist. This, his latest book, is a collection of polemical essays detailing examples of how capitalism has imposed ecological disaster on the worlds’ population in the name of growth. The relentless drive for profit often supressed more eco-friendly alternatives and justified environmental destruction in terms of modernity and progress.

As I write, vast areas of the planet are facing either drought, wildfires, floods, crop failure, extreme weather events or soaring temperatures. Eco-systems are changing, putting pressure on subsistence farmers and a pastoral way of life. The dysfunctional energy market is putting obscene profits before the needs of millions. The extraction of fossil fuels is accelerating, pouring billions into the pockets of a few individuals. Millions of urbanised people are now experiencing the realities of global climate change first hand. Previously, often hidden by a supine media, climate change was considered an issue for a few populations in far away places. This is not the case now.

At the same time, what passes for political leadership in this world is largely ignoring the truth of climate change and actively promoting policies that will increase the damaging carbon emissions. Even after the fanfare of the COP26 conference in Glasgow last year, the meagre promises made have evaporated in the maniacal pursuit of profit. It can all seem over-whelming to an individual. Climate anxiety is very real.

Jeff Sparrow’s book is an antidote to the feeling of dread and helplessness that many can experience in the face of such catastrophes. The premise of the book is that capitalism has always exploited the earth’s resources with ruthless zeal but has deflected the blame for its destructive consequences back onto individuals. If you consume, drive a car, travel, eat food, drink clean water, buy clothes, want a mobile phone, it is YOUR fault that climate change is happening. The solution to the climate crisis is in your hands. The choices you make as an individual are your responsibility. So, choose to drive an electric car. Recycle. Buy organic food. Install insulation. Go on eco-friendly holidays. Many of these so-called choices are, in fact, expensive and beyond most peoples’ means.

Look at the advice given to people by the current Tory government in the wake of the catastrophic energy price rise. Turn down your heating, wear more layers, turn off your lights, don’t fill your kettle. I remember 1974 when the miners’ strike led to power cuts. As a kid, it seemed exciting to use candles and torches. We were advised to ‘brush your teeth in the dark’ and ‘share a bath’ by Tory ministers. Over 50 years later and the apologists for capitalism are dishing out the same advice. Kwasi Kwarteng, the current business secretary, and possible chancellor in a Liz Truss government, actually advised that energy use is an individual’s choice. Nothing to see here; just the market working; profits are a good thing; we’ll get more fossil fuels; and keep calm and carry on.

Sparrow’s book gives examples of an alternative view. In the chapter ‘The Hydrocarbon Explosion Engine’, he charts how the needs of capitalism to make profits regardless of consequence led to the triumph of the petrol driven car over electric alternatives, marketed as an instrument of individual freedom to a growing urban population. There were objections to the cars as polluting and dangerous to children, hard to believe now. In another chapter, Sparrow explains that the colonialisation of Australia brought with it a remarkably rapid environmental destruction thus undoing thousands of years of sympathetic human interaction with the land. Indigenous people do not create ‘paradise’ or ‘wilderness’ but develop ways of exploiting the resources without destroying the environment, thus ensuring sustainability and mutual benefit. Capitalism’s era of colonialisation and slavery portrayed such people as primitive and savage and yet the relentless expansion of empire and exploitation has no equal for savagery.

Each chapter in this book contain warnings about the environment and capitalism’s inability to provide solutions. Crucially, there are also examples of hope and optimism. Collective responses to climate change are needed, not individual, choice-based ones. Tinkering with eco-friendly consumer goods, however commendable, won’t cut it. Focussing on individual transport solutions or individual home insulation, or individual heat pumps won’t do. Society needs to democratise, debate and plan the economy for the good of the people and the planet. Capitalism has proved it cannot do this. Many of the apparently separate issues we are facing at the moment are linked through the environment. Think about the rail strikes, food costs, Covid, and water shortages. The solutions don’t lie in the profit-taking corporations but in the collective actions of ordinary people. As Sparrow concludes, organise, unionise and nationalise, protest locally and internationally. This optimistic message cuts through the doom and the gloom of climate anxiety. Read this book, then act. As the banners say: ‘System Change not Climate Change.’

Charlotte Ahmed is a retired teacher, socialist activist and member of the SWP.