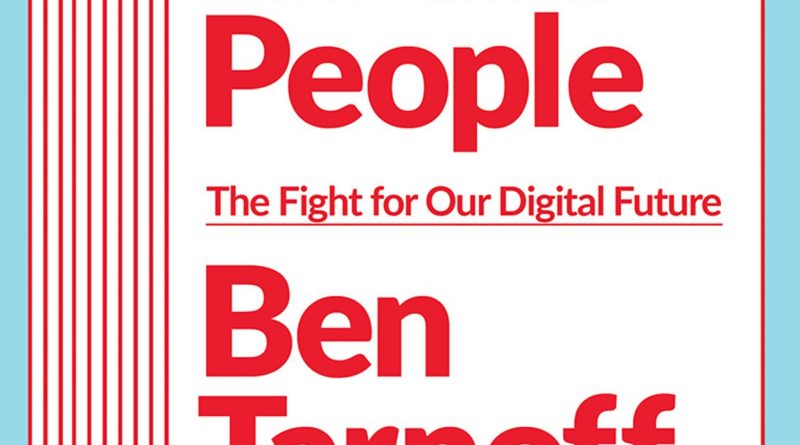 A new and highly informative book by leading tech writer and activist, Ben Tarnoff, responds to a dilemma that the world is waking up to and which we must confront together: that the internet has fallen into the wrong hands. Internet for the People provides both a convincing manifesto for reinventing the internet and its underpinning structures of ownership as well as a concise and abridged history of the internet and how it became what it is today. Of course, the internet is now a basic utility to modern life – a public good which, as Tarnoff argues, should be treated accordingly by the state and its tax-making powers.

In the first section, dedicated to the ‘pipes’, Tarnoff explains how the hardware and underlying technology of the internet (in particular, its incarnation as the ‘World Wide Web’) is perhaps the archetypal example of state-funded innovation – in this case within the US military and academia – being quickly taken into the hands of capitalists – a pattern Mariana Mazzucato has elucidated to the world. Glimmers of hope are offered such as local, community-owned fibre-to-the-home networks in Detroit and North Dakota where internet access is cheaper and of a higher quality than the US average as a result of local, collective ownership of the network.

Accounts of successful local activism – the likes of which Britain is yet to enjoy – read as a call to dispersed models of ownership and local democratic accountability of public utilities that could be applied across many sectors of the economy, bringing the reader up to speed with the inner technical workings of the internet along the way.

Moving on to the ‘platforms’ – deliberately misnamed as Tarnoff explains to falsely imply openness and a level playing field – there is unfortunately less hope to be found, although Tarnoff and his activist colleagues will be among those to lead the thinking, if the problems of big tech can ever be solved.

Early warnings that the internet’s content would promote a ‘zombie like passivity – look here, click here, enter your credit card number here – that threatened the participatory nature of the [early] internet’ have now come to pass. In every way, if we didn’t know it already, Tarnoff describes how the internet has become the ultimate lubricant to the capitalist machine. With reference to Marx’s theory of ‘real’ vs ‘formal’ subsumption of labour, Internet for the People sets out how the internet – using data as its booster fuel – has now been optimised for profit. In the lead-up to the ‘dot-com bubble’, the formal subsumption of labour had happened – see the famous failure of Pets.com which sold pet supplies by post to Americans – but we were yet to see the real subsumption of labour that we now witness in, for example, Amazon’s complete reinvention of the notion of shopping.

The destructive, unbridled greed of the large platforms we know today – an historical account is offered of eBay, Amazon, Uber, and Google among others – has almost no limits, as Tarnoff explains, now that these companies have mastered how to capitalise on the ‘network effect’ and monetise the social relations of the internet, in the form of data. From fine-tuning aggressive advertising techniques, using huge capital injections to make loss-making market-entry and force smaller businesses into bankruptcy to completely revolutionising economic models through fuelling the gig economy. So, the internet has begun to transform socioeconomic relations.

Tarnoff reminds us of some of the internet’s tragic victims, such as the widely-reported suicide of New York taxi driver, Doug Schifter, who had spent his final years highlighting how Uber was destroying the livelihoods of NYC cab drivers. The book also brings attention to some less well-understood victims such as the underpaid ‘shadow workforce’ who spend hours of their lives in low-income countries working for big tech firms to identify abusive or harmful content, traumatising those workers along the way.

Tarnoff’s main point through the second section, however, remains the fundamental argument that the internet cannot serve the public good when it remains in the hands of those who want nothing other than to extract a profit. As he explains, while wages refuse to rise ‘[the internet’s] economic legacy would be the creation of islands of super-profits in a sea of stagnation’. As has been the case in every aspect of the economy, capitalism’s model of risk and reward allows risk to be passed on to the citizen/consumer while the reward – financial, or political – is funnelled to the top.

Written almost wholly from a US perspective, the reader is left wanting to know about other examples of big corporations using the internet to shape society in ways that suit them; the almost completely separate ‘internet’ consumed by the Chinese population is, for example, ignored. Tarnoff also touches on other aspects of life online that are worth deeper exploration such as misconceptions around the internet being ‘at fault’ for political polarisation and extremism.

Internet for the People is an impressive and powerful contribution to the growing critical left-literature on the internet and big tech. The reader will be taken on an informative trip through the internet’s key components, how it has become a tool for entrenching social and economic inequality and what could be done to bring the internet back under the control of the people. However, despite Tarnoff and others’ best efforts to shine a light on what ‘internet for the people’ might look like, the reader is merely left with a clearer understanding that there is no easy path.